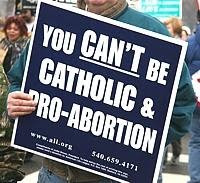 Contributor Doug writes: The fight to preserve a culture of life begins at home. I have had many recent conversations, and in some cases, arguments, with family members and fellow Catholic friends who did not know anything about Obama’s abortion record or stance, yet all voted for him and are zealous supporters. In some cases, they still expressed support for him, even after being edified of his barbaric record on abortion (such as denying medical treatment to fully born infants who survived botched abortions) in the Illinois State Senate. One person even denied his record, and called it conservative rumors spread by Rush Limbaugh. I was also recently involved at my parish in distributing to our parishioners literature and post cards to our members of Congress regarding the euphemistically dubbed “Freedom of Choice Act” (FOCA), our nation’s most radically insidious (and unconstitutional) pro-abortion plan yet, and to be funded on the taxpayers’ dime no less. I was again amazed at how many of my fellow Catholics were so outraged because they didn’t know about FOCA, or the pro-abortion stance of Obama and their members of Congress. Some even sorrowfully admitted to voting for these people without knowing about their records. (Sadly, I am sure there were some who were not outraged at all.)

The Catholic Church calls on its members to make and have informed consciences, yet roughly 54% of Catholics voted for Obama. As Catholics comprise roughly 1/3 of Connecticut’s population, I wonder how many also voted for Lieberman, Dodd, and our pro-abortion members of the House of Representatives. That duty doesn’t just end at Catholics. All citizens have an ethical and moral duty to be informed and principled voters, yet clearly, many, regardless of denomination, are not. No issue is more important than preserving innocent, vulnerable life.

Clearly, we need to ramp up our efforts to defeat not just abortion, but euthanasia and (embryonic) stem cell research as well. But before we take on the opposition, we pro-lifers first need to better educate ourselves.

I think it was a “Doonesbury” comic strip that once classically depicted the character saying, “I have met the enemy, and it is I.” Prophetic indeed.

All voters need to be more diligent and more diverse in educating themselves on current events, issues, and political candidates. In this age of the Internet, it’s now even easier. For anyone who cannot afford a computer, they can certainly afford a visit to his or her local public library, where a computer can be used for free.

49.5 million abortions have taken place in the US since the Roe vs. Wade decision of 1973. Genocide of such magnitude is in the league of those committed by the likes of Hitler, Stalin and Mao. How many of those precious children were needlessly and cavalierly executed because far too many of their older and presumably wiser fellow citizens failed to protect them because they were out of the loop by their own fault?

Ignorance is simply no excuse, especially when lives are at stake.