When a Cardinal Betrays a Pope 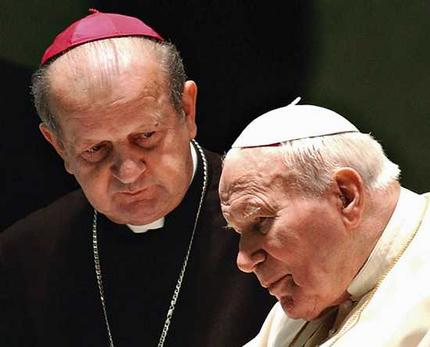 Upon the death of Pope John Paul II, his secretary, Cardinal Stanislaw Dziwisz was entrusted with the duty of burning ALL Pope John Paul II’s personal notes.  This was JPII’s final request and written in his will that the writings be burned upon his death.

Unfortunately, Cardinal Dziwisz (now Archbishop of Krakow) decided he would not honor the late Pope’s final Will and Testament and instead has decided on his own to publish a book (“I Am Very Much In God’s Hands”) using the beloved late Pope’s personal and private notes. The book was published this week (Feb.5, 2014) in Poland.

The Cardinal seems to have no qualms about denying Pope John Paul II’s final wishes and excuses his actions by saying “he didn’t have the courage” to follow the Pope’s final request of him.

Cardinal Dziwisz has taken it upon himself to decide that he knows better than the author of the notes, deciding that the world should witness the thoughts and private journal writings of Pope John Paul II.

“In writing his will, the Holy Father knew he was entrusting these notebooks to someone who would treat them responsibly,” Cardinal Dziwisz said at a news conference in Krakow on Jan. 22. “I had no doubt these were such important items, testifying to the spirituality of a great pope, that it would be a crime to destroy them.”

Wrong Cardinal!  The Holy Father was entrusting YOU to BURN the items, not publish them.  His will was specific and you betrayed him his dying wishes. 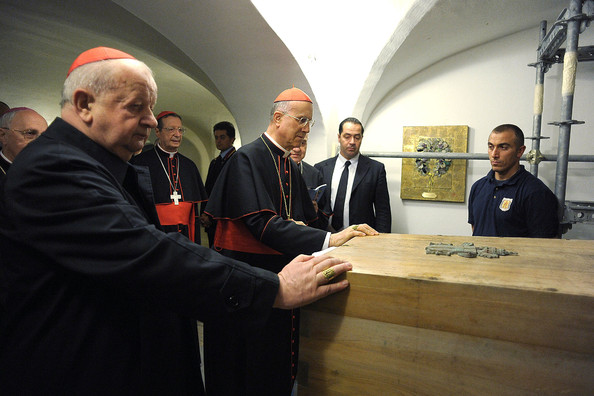 It would be “crime” in his opinion, but in Pope John Paul II’s opinion it would be a betrayal NOT to burn them as he (JPII) requested.  The Pope did NOT want these writings published and his request SHOULD be honored, not published and made a profit off of.

I understand the DESIRE to keep something the Cardinal (and others) would view as “important items” from the late Pope, but when does their desire trump a Pope’s final death wishes?

Personally, I think this is wrong, even though I myself would love to know what Pope John Paul II had to say. I would put aside MY desire to honor HIS desire, as I think this Cardinal SHOULD have done.

Why didn’t the Vatican step in and put a stop to this?

Will ANY Pope’s final requests in the future be honored if we have Cardinals betraying them like Cardinal Dziwisz is betraying JPII now?

How can ANY Pope trust that his final wishes will be carried out if the Vatican allows this book to be published?

“In European culture, a final will is always binding, as long as its realization isn’t against the law and morality,” Father Isakowicz-Zaleski told TVN, a Polish television broadcaster. “This is required not just by legal statutes and good manners, but also by respect for the dead. This public act of disobedience is a form of anti-witness, and can’t be justified by any explanation that it’s for the good of the church. Does a clergyman serving as a secretary know better than St. Peter’s successor?”

As the grossly overused term “slippery slope” comes to mind I really have to again wonder WHY the Vatican would allow this to happen.  I think it’s sad.

What do you think?  Should the Cardinal have written this book and betrayed the Pope’s final wishes or is it too much a “treasure” to be burned as the Pope requested?  And should the Vatican have stepped in and stopped this book from being published?

What are your thoughts?  Would/will YOU read the book?