Archdiocese of New Orleans has a gay problem

There is something seriously wrong with the Archdiocese of New Orleans.
Namely, they speak with a forked tongue.

How can any Catholic understand what the Catholic Church's teaching is when they look to the Archdiocese of New Orleans' website for answers?

On their website, in the LBGT section they have a (what should be simple) Q&A section presumably to help people understand the Catholic Church's teachings on homosexuality.

For example...here are a few questions some Catholics might wonder about that the Archdiocese of New Orleans completely FAILS to correctly answer.

Q:  Does a person commit a sin if he/she engages in sexual activity outside of marriage?
(now remember, this is in the LBGT question/answer section)

Answer from the Archdiocese of New Orleans:

You get that last one? "...people who are so predominately homosexual that they will be in serious personal and perhaps social trouble unless they attain a steady partnership within their homosexual lives, one can recommend them to seek such a partnership..."

The Church (or at least the Archdiocese of New Orleans) is RECOMMENDING that in some situations homosexuals need to have a "partnership within their homosexual lives".

There is more to this section:

Q: Can an OPENLY GAY person be a faithful Catholic?

Now, before I get to the Archdiocese of New Orleans' answer (which if you are thinking is a quote from the Catholic Church's catechism- you'd be wrong) let me point out the key words here "openly gay".  Generally speaking these are NOT the chaste gay folks living chaste and celibate lives.  "Openly gay" usually means having gay relationships and in many cases in a gay union (no such thing as a gay "marriage"- I don't care what the Supreme Court says).

Here is the response at the Archdiocese of New Orleans website which refuses to tell people that homosexual acts can/do lead people to damnation:

Here's another Q&A from the Archdiocese of New Orleans...

Q: Does the Bible condemn homosexuality?

You'd think that would be an easy one...not for the Archdiocese of New Orleans.  Seems they believe there is some wiggle room.

*there is a much longer answer to this question on the website, but it all says the same thing.

They have a LBGT Catholic Ministry which has a Facebook page.

On that Facebook page they endorse a ministry called "Gay Christians" 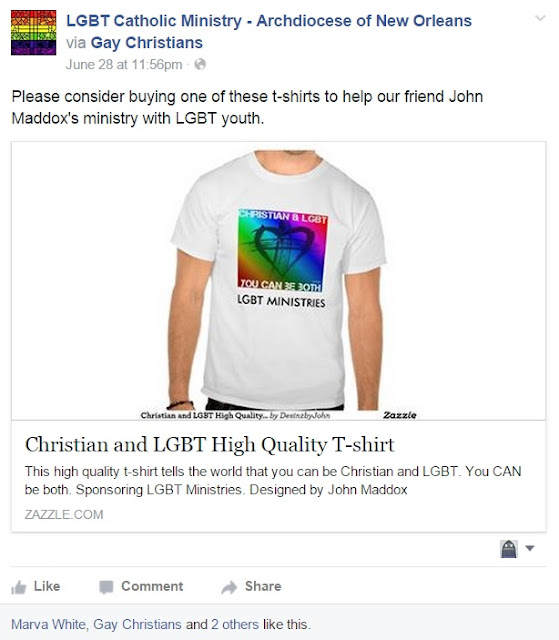 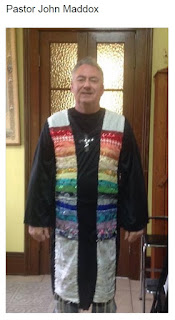 John Maddox.  He's not a Catholic priest. But who is he? 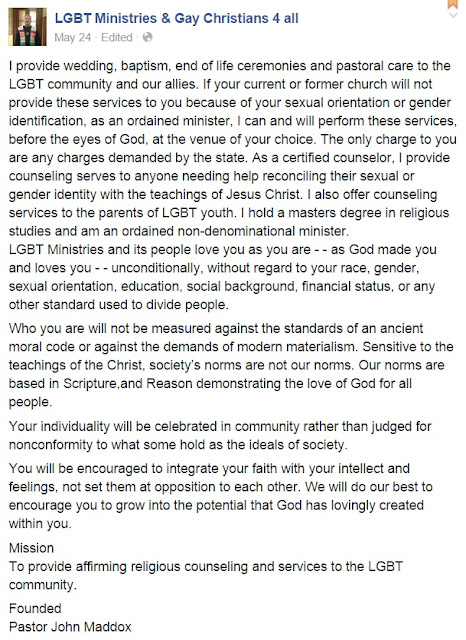 The Archdiocese of New Orleans' LBGT Catholic Ministry doesn't just endorse this guys t-shirt selling for gay youth...they also have him as their guest speaker after the "3rd Wednesday every month gay Mass"... 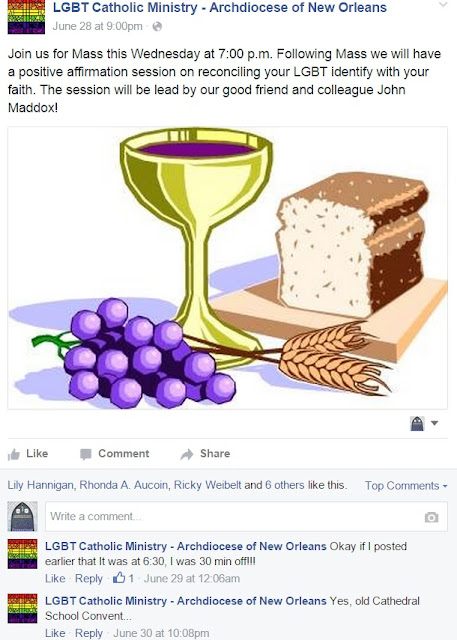 It doesn't stop there... apparently this "non-denominational pastor" is also responsible for updating the Archdiocese of New Orleans' website.
Check out whose name appears... 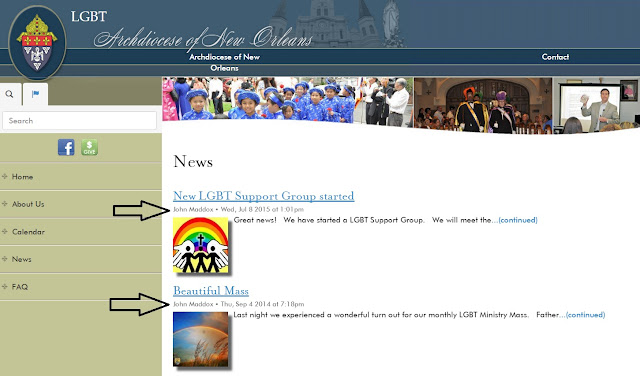 I did a little more clicking around and found... 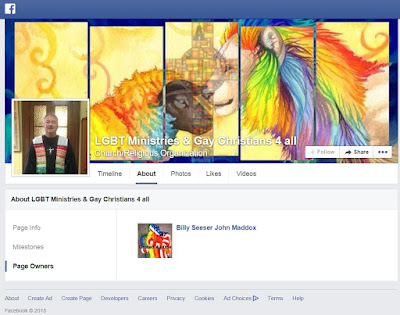 Billy Seeser and John Maddox are gay lovers/partners according to one of their several gay Facebook pages. 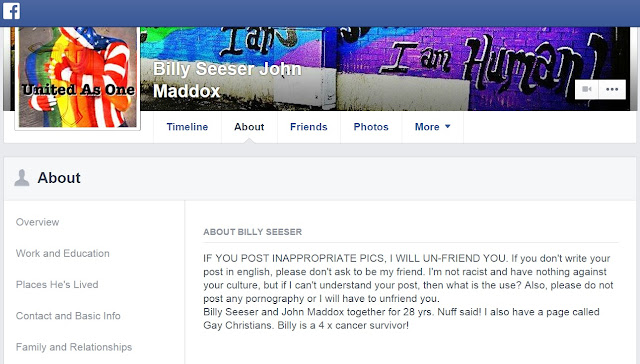 So the Archdiocese of New Orleans and their LBGT Catholic Ministry (per their Facebook page) are endorsing the ministries of John Maddox's "Gay Christians" by asking people to support Maddox' s "Gay Christians" ministry with the purchase of one of their t-shirts AND they have him [John Maddox] as their "positive affirmation" speaker at their LBGT meetings following their gay Mass.

Just what is going on with the Archdiocese of New Orleans?

Why doesn't the Archdiocese of New Orleans answer homosexual questions with the clear teachings of the catechism?

I know why...the LBGT don't like the clear teachings of the catechism, so they seek out other blurred answers so they can continue in their sinful relationships and promote the same with others seeking the Church's answers to these questions.

The Archdiocese of New Orleans website is DECEPTIVE and MISLEADING.

Is the Bishop fully aware of what is being promoted on the Archdiocese OFFICIAL website and it's LBGT Catholic Ministries Facebook page?

I would have given the Archbishop the benefit of the doubt until I read that a GOOD priest in his diocese CORRECTLY refused the Eucharist to a gay "married" man at a funeral.  The gay man then whined (like they all do) to the Archbishop who APOLOGIZED to the man for having Holy Communion denied to him while he was in a state of mortal sin. 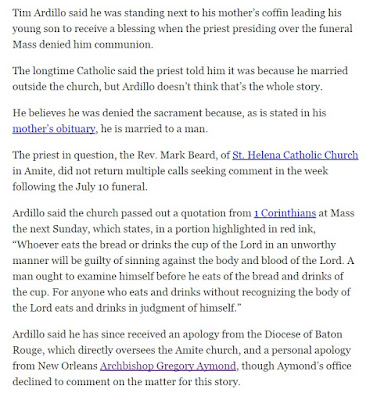 
There is a rot in the Archdiocese of New Orleans and someone needs to clean it up - clearly it won't be the Archbishop.


In Addition:  How about showing the good Fr. Mark Beard your support for denying the gay "married" man the Holy Eucharist?  Send him an email at: sthelenacatholic@bellsouth.net


UPDATE: 24 Hours after writing this post, the Archdiocese of New Orleans has removed the LBGT "fact" page and shut down the LBGT Catholic Ministry Facebook page.

**To those of you who tried the links and see they no longer work and now are questioning whether or not this stuff is true [I did NOT lie about what was on that website] - here is a link to the cached Archdiocese of New Orleans website- you can STILL see it all:
http://webcache.googleusercontent.com/search?q=cache:http://lgbt.arch-no.org/faqs&strip=0&vwsrc=0


This stuff isn't rocket science people, you simply go to "Cache View" and put in ANY website address and you will find it even after it is taken down.


And...John Maddox's Facebook page that was once linked to the New Orleans Archdiocese's LBGT Catholic Ministry Facebook page is shutting down! 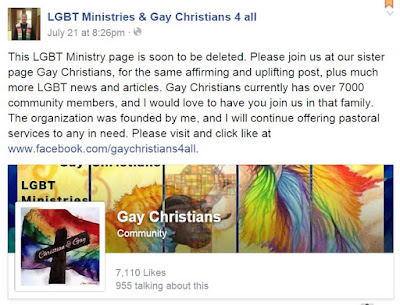