I trusted you Fr. Corapi...

I've avoided this topic long enough. My intention was not to shove it in a closet and pretend it wasn't happening, but rather to wait and see. 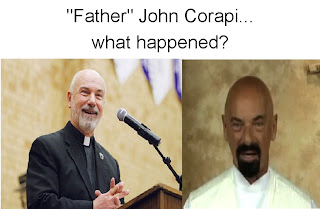 I didn't want to believe it and I didn't want to slander a priest whom I have loved, trusted and respected for so many years. I wanted to give him the benefit of the doubt. I wanted to believe this was some horrible attack by the enemy to bring down a good priest and great defender of the Faith. I wanted to know that the trust I put into this priest was well placed. I wanted to believe that he was a victim because to believe he was guilty was just too devastating. It made me question my ability to discern the truth from lies. Who could I trust if someone I looked up to like Father Corapi was lying and leading a double life, preaching one thing and doing another? How could I fall for such deceit? Who should I trust if not a priest who preaches so well on the faith?

I'm a convert. I don't know that I would actually be Catholic today if not for Father Corapi's teaching on EWTN and Youtube. Eventually probably, but Father Corapi's teaching fast tracked me to becoming Catholic. I had so many questions about the Catholic faith and like many others before me, found them answered on EWTN (God bless you Mother Angelica). While Father Corapi certainly was not the only one teaching me the Catholic faith on EWTN, he was one of my favorites (as you may already know if you've read my conversion story on this blog).

As I said earlier, I didn't want to jump to any quick judgements when the "Corapi Controversy" first began hitting the media. I wanted to give it some time and see what actually came to light. Before the rumors began, I noticed a different looking Corapi. He had shaved his head, dyed his goatee and gotten an orange tan. I wondered what that was all about. It was strange to me and others I talked with. We couldn't figure out why he would do that to himself- we still can't figure that out. It's bizarre. Was Father Corapi having a mid-life crisis or something?

Like so many others, I was shocked and outraged on behalf of Father Corapi when he was suspended back in March. I was so full of absolute trust in this priest that I could not believe for a moment the rumors of him acting in anyway unprofessional as a priest. I thought "the enemy is attacking a great Catholic priest" and I stood by that belief for months.

Then the bizarre "Black Sheep Dog" story came out along with his statement that he was no longer going to be called "father", but simply "The Black Sheep Dog". Well, pardon my language here but "Just what the hell was that?" Now my shock was over-run with my anger. I shouted "Hypocrite" at his blog. He had preached and taught for YEARS about "offering it up" and "carry your cross" when we suffered, he NEVER preached about giving up and walking away! Who was THIS man and where was the Father Corapi I had come to know??

Ahh... and there lies the problem. I didn't know Father Corapi, I never had. The Father Corapi I thought I knew was a fraud. He was made up. The real Corapi was busy with prostitutes, sexting and living away from his order collecting millions from his media company. In other words he was the SAME John Corapi as he was BEFORE his conversion "back to the Church" (from his conversion story video). All the ways he described himself prior to becoming a priest are exactly what has come out now. He's the same old John Corapi he was in his youth, drinking, drugs, women, lying...boldly living in sin without thought for morality. There was no conversion. It was all a lie, a deceitful lie to sucker people in.

That is devastating to so many of us who trusted him, respected him, looked up to him and believed in him. And what of his poor mother? She must be even more devastated then the rest of us. He has spoken of his parents lovingly during his speeches, how proud they were when he "changed" his life and became a priest. What must she think of him now? I believe his father has already passed away- at least he was spared seeing his son fall so low.

This week's statement by SOLT's (the order Corapi belonged to) naming the allegations and 'proof' found are just too much to ignore any longer.

A July 5 press release from the Society of Our Lady of the Most Holy Trinity (SOLT) said that while Fr. Corapi was involved in public ministry he had "sexual relations and years of cohabitation with a woman known to him, when the relationship began, as a prostitute."

The investigative team also found that he "repeatedly abused alcohol and drugs," "recently engaged in 'sexting' activity with one or more women in Montana," and holds legal title "to over $1 million in real estate, numerous luxury vehicles, motorcycles, an ATV, a boat dock, and several motor boats."

His religious order said it is concerned "Fr. Corapi is now misleading (many) individuals through his false statements and characterizations."

"It is for these Catholics that SOLT, by means of this announcement, seeks to set the record straight."


You lied to us "Father" Corapi. It's not just that you did these things, it's that you continue to deny it and call yourself innocent when the proof has already been found. Admit it!! Stop telling everyone you are innocent and face up to what you've done. You need to confess, repent, do penance AND apologize to everyone. It's not that I thought the man sinless or that he could do no wrong, I'm not that naive. It's that I didn't think he would flat out lie to everyone or be the fraud he has been proven to be. To say I am disappointed doesn't begin to cover it. 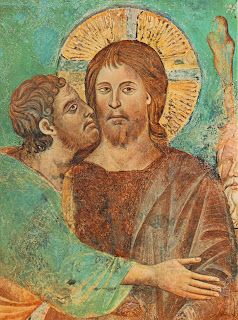 You've taught me your last lesson John Corapi... never completely trust anyone, even a priest. I'll pray for you, but I'll never trust you again.

Is.2:22 'Stop trusting in mere humans,
who have but a breath in their nostrils.
Why hold them in esteem?'