I've lived in Connecticut all my life, so I've endured several hurricanes and for the most part we've always made out with only minor damages over the decades (a partial lost roof, trees down, mild water damage and busted windows mostly). Thankfully, we've never known the total destruction of our home or any loss of life from a hurricane. My heart goes out to the people who are now (and in the past) suffering the ultimate price of living in the path of a hurricane. 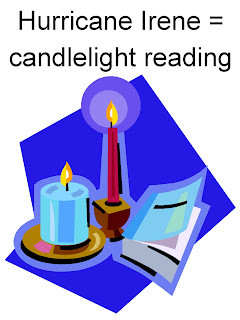 For us Hurricane Irene was just a big pain in the backside most of the time. I say most of the time, because the rest of the time my children's laughter and giggles blocked out the inconveniences and frustration. Not having electricity or a land line phone for four days is humbling and frustrating (we've gone longer periods, so those of you still without power you have my sympathies).

How many times did we flick a light switch walking into a room or pick up the phone only to hear dead silence on the other end? Too many to count. We spent our days outside looking up and down the road (along with our neighbors) in hopes of seeing any CT Light & Power truck on it's way. We also played board games like "Sorry" and "Scrabble". Our evenings were spent listening to the radio sparingly because once those batteries were gone, that was it. There were no batteries to be found anywhere.

Reading by flashlight was a limited treat because again, we didn't want to use up the batteries and be left completely in the dark. I tried candlelight, but the flickering bothered my eyes more often than not. And I couldn't focus well on reading one single book (I'm the type of person that when something is bothering me-like not knowing when the power will come back on- I can't focus well or absorb what I read. My brain is easily distracted much to my annoyance.

But I did manage to retain a few things I read. Like the fact that it was a Catholic priest named Fr. Frank Peyton who coined the motto "The family that prays together, stays together" in 1947 while trying to promote his Family Rosary Crusade. I had heard protestants use that quote all the time, I now wonder if they knew it came from a Catholic priest wanting to promote praying the rosary?!

I didn't know these things before Hurricane Irene hit, so besides being thankful for surviving Irene and having only minor damage, I am also thankful for the new things I learned about my Catholic faith.

**The book I learned these things from is: "The Catholic Almanac's Guide to the Church" by Matthew Bunson.