Seeing the worth of every human life. Reflecting on the Newtown Tragedy. 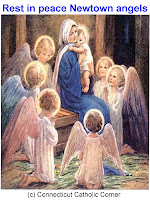 As so many others in Connecticut and around the world, my heart is broken and I feel shattered by the tragedy in Newtown, Ct on Friday.  The stunned glassy-eyed expressions at mass on Sunday said it all.  Such evil shocks us to the core and destroys any sense of ‘safe’ we may have had.

If our precious children are not safe in our schools, how can we ever kiss them goodbye and wave to them getting on the bus again?  How can we drop them off at school and drive away knowing that it might be the last time?  Those are the things parents (myself included) are thinking after Friday’s tragedy.

Others are thinking we must have stricter gun laws.  I understand that people want action NOW!  Enough is enough…but the reality of it (sadly) is guns don’t kill people, people kill people.  If every gun in the nation were removed, does anyone think murder would stop?  Murder has been the violent answer to man’s selfishness since the beginning…be it by clubbing, hanging, strangling, knives, stoning, bombs, chemicals, guns and even airplanes as we all learned on September 11th.  Murder is murder…the weapon doesn’t really matter when the end result is the same.

8And Cain said to Abel his brother: Let us go forth abroad. And when they were in the field, Cain rose up against his brother Abel, and slew him.  9And the Lord said to Cain: Where is thy brother Abel? And he answered, I know not: am I my brother's keeper?   10And he said to him: What hast thou done? the voice of thy brother's blood crieth to me from the earth.  11Now, therefore, cursed shalt thou be upon the earth, which hath opened her mouth and received the blood of thy brother at thy hand,   12When thou shalt till it, it shall not yield to thee its fruit: a fugitive and vagabond shalt thou be upon the earth.”
Cain murdered his brother because he was jealous.
Herod killed untold numbers of babies and toddlers out of fury…
Matt. 2:16
16Then Herod perceiving that he was deluded by the wise men, was exceeding angry; and sending killed all the men children that were in Bethlehem, and in all the borders thereof, from two years old and under, according to the time which he had diligently inquired of the wise men.”
The Roman’s killed thousands of people, namely Christians by feeding them to wild beasts for pure entertainment, as did Nero.
We are perhaps more familiar with recent history and Adolf Hitler’s killing millions of people with gas chambers for world power- greed.  Or terrorists using airplanes as their weapon of mass murder.
We’ve had far too many (one is too many) school shootings…movie and mall massacres…and drive-by killings.  The list goes on.  Whether mentally disabled or simply evil incarnate, what they all have in common is a complete and utter lack of seeing the worth of every human life.  We are a disposable society.  Unwanted pregnancy?  Kill the preborn legally with abortion.  Too old and feeble?  Kill the elderly and infirm with euthanasia.
Our society is entertained with movies full of weapons, fighting, killing, blowing things up, adultery, fornication, incest, and sexual depravity, violence upon violence of the human body, human intellect and human spirit.  People grab some popcorn and soda then sit back to watch human beings on screen being shot, mutilated, tortured and killed for ENTERTAINMENT.  Does this not register with people as sick and twisted? We are breeding killers by the very society we create daily to raise our children in.  A warped society that glorifies violence on television and in movies is where (sadly) we all live today.  In video games our children, teens and adults play at shooting others, racking up points for the number of dead they accumulate.  This “entertainment” and disposable secular society of killing our pre-born and elderly is desensitizing humans to the value of each human life.
What is surprising is that we are still able to be shocked at all when a horrible tragedy like that at Sandy Hook in Newtown, Ct takes place or that of the movie massacre this past summer or Columbine years ago.  We are creating generations of people who think other people are disposable and watching them be killed (in movies, video games and life) is entertainment.  That is the sad reality of our secular society today.
My heart goes out to ALL the families who are victims of violent crime- murder in or out of the womb is a horrendous tragedy as all life is precious and until we all learn that fact and fight to save all life, we are doomed to the disposable violent society we’ve created for ourselves and our children.
When we ALL begin to place value in ALL human life, from conception to natural death, then and only then will we see a real change in our world.  When we shun violence as 'entertainment' in all its forms and stand up for the life of all human beings... then we will change the tides of our society.  We must love each other and value each other because life has value at any and all ages.  God bless and have mercy on us all.
Posted by Connecticut Catholic Corner