Are abortion supporters our 'neighbors'? 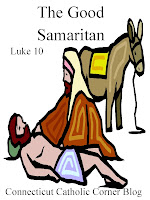 On Friday night July 12th through the early hours of Saturday, I (like so many others), were riveted to our Twitter accounts watching as Pro-lifers (#Stand4Life) and Pro-choicers (#StandWithTXWomen) clashed in Texas over a law that would ban abortions after twenty weeks – the law passed by the Grace of God and the prayers of so many loving people.

But during those hours (and I mean HOURS) I watched and read tweets from people on the ground in Texas (because all the news channels were discussing the Zimmerman trial, ignoring Texas completely).  What these wonderful pro-life people were reporting was shocking... feminine hygiene products being thrown at people, bottles of human waste confiscated by the police (it was intended to be tossed on people who disagreed with them) and more.

The Texas Tribune (http://www.texastribune.org/2013/07/13/texas-abortion-regulations-debate-nears-climax/ ) was covering the story, and they didn’t back down from the filth coming from the Pro-Choice crowd.

Clip from the Texas Tribune article:

Rumors had persisted earlier Friday that some protesters had tried to bring such containers into the gallery, but DPS officers outside the gallery said they had no knowledge of such attempts at the time.The DPS issued a press release on what it had found so far:        AUSTIN – The Texas Department of Public Safety (DPS) today received information that individuals planned to use a variety of items or props to disrupt legislative proceedings at the Texas Capitol.Therefore for safety purposes, DPS recommended to the Texas Senate that all bags be inspected prior to allowing individuals to enter the Senate gallery, which the Texas Senate authorized.During these inspections, DPS officers have thus far discovered one jar suspected to contain urine, 18 jars suspected to contain feces, and three bottles suspected to contain paint. All of these items – as well as significant quantities of feminine hygiene products, glitter and confetti possessed by individuals – were required to be discarded; otherwise those individuals were denied entry into the gallery.In the interest of the safety and security of Texas legislators and the general public, these inspections will continue until the conclusion of Senate business. –end quote-

After reading that, I was disgusted and furious that people would be so horribly vile to other people who simply wanted to save the life of a child.  I saw horrible photos of people wearing clothes with drawings of women’s body parts, I saw a teenage looking YOUNG girl holding such a blasphemous sign about our Lord Jesus Christ that I can’t even believe a parent would allow a child to VIEW such a sign, let alone wave it around in the air.

My mind was so appalled at what these people were doing and WHY they were doing it, that I stopped thinking at all in a Christ-like manner and instead let my heart burn with anger and hatred for every single pro-choice person out there.  I was sickened by them and wished the earth would just open up and swallow them all like the story of the evil men in Moses’ time…

“But if the Lord creates something new, and the ground opens its mouth and swallows them up, with all that belongs to them, and they go down alive into Sheol, then you shall know that these men have despised the Lord.”  As soon as he finished speaking all these words, the ground under them was split apart.  The earth opened its mouth and swallowed them up, along with their households—everyone who belonged to Korah and all their goods.  So they with all that belonged to them went down alive into Sheol; the earth closed over them, and they perished from the midst of the assembly.” [Numbers 16:30-33]

I went to bed happy that the bill had passed and yet still angry at ‘those people’ for fighting so venomously for the “right” to butcher pre-born human beings.  I woke up feeling the same, only with a bit more disgust as the shock of it was wearing off and the evil and filth of it setting in. I had no pity for 'those people', they disgusted me and I was beginning to feel real hatred for them.

Then I went to Mass tonight.

The Gospel reading was about just who is our “neighbor”, with Jesus giving the story of the Good Samaritan.  [Luke 10]

One of my parishes’ wonderful deacons did the homily this evening, and he promptly reminded me that hatred has no place in living like Christ.  Being a good neighbor to those perceived as “enemies” DOES have a place (right up front and center) to living like Christ.  You see, the story of the “Good Samaritan” is often not fully understood unless you know the relationship between the Jews and the Samaritans.  Hatred.  They despised each other with a passion.  They went out of their way to ignore each other – they even refused to allow Jesus into their city [Luke 9:51-56].

Then one day, one Samaritan does the unthinkable, he stops to help an injured Jewish enemy.  The Samaritan felt pity for this stranger that he’d been raised to hate.  Instead of treating the victim with hatred, he poured out love and compassion, binding his wounds, paying for him to be nursed and cared for and even promising to come back to see to it that the Jewish man was well cared for and that his bills were paid.

I knew all that, but had forgotten it until tonight's homily. A timely reminder, much needed and appreciated.  I had not been a neighbor to those pro-choice people- not even in my heart.  I had not had an ounce of pity for them.  I had hated them and wished them ill.  I was no better, and perhaps worse than those who had walked by the wounded man on the side of the road.

Listening to that homily, I learned very clearly that I don’t want to be someone who walks by the wounded because I perceive them as my enemy.  I want to have compassion for them and do what I can to help their wounds.  I don't want enemies and I don't want to be an enemy to anyone else- no matter how strongly we might disagree on something.

Anyone who supports the killing of pre-born children is certainly a wounded person.  They need compassion and as much prayers as we all can possibly give them.  Perhaps they have no one in their lives who ever prays for them?  Perhaps they don’t know much of anything about Jesus Christ?  That falls on those of us who DO KNOW Jesus Christ, to teach them, to pray for them and to have compassion for them.  How awful it will be for them one day to stand before God with their crime of supporting the slaughter of children?  Awful.  How much more awful for those us who KNEW and did nothing?  Who showed no compassion… who didn’t bother to pray or share our Lord with such a person because we perceived them as our “enemy”?   I don’t want to be such a person.  I’d rather try my best to live like the Good Samaritan, doing what I can with compassion for the wounded I see in life. I can start that by not viewing pro-choice supporters as 'enemies', but rather as severely wounded people who need prayers.