The Priesthood, Pornography and Violence in the Media

***WARNING: This post discusses sex and violence in the media*** 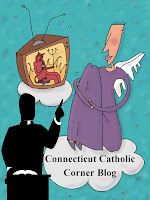 “mature” for children and to warn adults that the program will contain sex, violence, nudity and a number of other things, but who pays attention?
Do Christian adults regulate what they watch any more than they regulate what their kids watch, read or listen to?  If parents are setting the example for their children (big “if” for some I know), than shouldn’t we all turn OFF anything and everything with sex, violence and nudity?

The mere THOUGHT of lust is a sin that MUST be confessed for ALL Catholics- so how can ANY Catholic sit down in front of a television show that offers graphic sex scenes and nudity without putting themselves in sin?
Would you want Jesus to sit down next to you while you tuned into an episode of “True Blood” or “Game of Thrones” or “Sons of Anarchy”?

Should ANYONE who calls themselves Christian watch this?  Promote this sort of television viewing?  Can you imagine any of our beloved Catholic saints thinking this was a good way to spend our time on earth?
I hope you said no.

Now, lets see what the Holy Catholic Church has to say about sex and violence in the media.

[in part]
9. Ordinary experience confirmed by studies conducted around the world has recognized the evil effects of pornography and violence in the media.[5] Pornography in the media is understood as a violation, through the use of audio-visual techniques, of the right to privacy of the human body in its male or female nature, a violation which reduces the human person and human body to an anonymous object of misuse for the purpose of gratifying concupiscence; violence in the media may be understood—especially in this context—as a presentation designed to appeal to base human instincts of actions contrary to the dignity of the person and depicting intense physical force exercised in a deeply offensive and often passionate manner.
Specialists may disagree among themselves about how and to what degree particular individuals and groups are affected by these phenomena, but the broad outlines of the problem are stark, clear and frightening.

10. While no one can consider himself or herself immune to the corrupting effects of pornography and violence or safe from injury at the hands of those acting under their influence, the young and the immature are especially vulnerable and the most likely to be victimized. Pornography and sadistic violence debase sexuality, corrode human relationships, exploit individuals—especially women and young people—undermine marriage and family life, foster anti-social behavior and weaken the moral fiber of society itself.

11. Thus, one of the clear effects of pornography is sin. Willing participation in the production or dissemination of those noxious products can only be judged a serious moral evil. Likewise, production and dissemination of these materials could not continue if there were not a market for them, so those who use such materials not only do moral harm to themselves, but contribute to the continuation of a nefarious trade.

13. It has been said that there can be a psychological link between pornography and sadistic violence, and some pornography is itself overtly violent in theme and content. Those who view or read such material run the risk of carrying over such attitudes and behavior into their own relationships and can come to lack reverence or respect for others as precious children of God and as brothers and sisters in the same human family. Such a link between pornography and sadistic violence has particular implications for those suffering from certain forms of mental illness.

14. Even so-called "soft-core" pornography can have a progressively desensitizing effect, gradually rendering individuals morally numb and personally insensitive to the rights and dignity of others.
Exposure to pornography can also be—like exposure to narcotics—habit-forming and can lead individuals to seek increasingly "hard-core" and perverse material. The likelihood of anti-social behavior can grow as this process continues.

15. Pornography can foster unhealthy preoccupations in fantasy and behavior. It can interfere with personal moral growth and the development of healthy and mature relationships, especially in marriage and family life, where mutual trust, openness and personal moral integrity in thought and in action are so important.

17. In the worst cases, pornography can act as an inciting or reinforcing agent, a kind of accomplice, in the behavior of dangerous sex offenders - child molesters, rapists and killers.

29. The Church And Religious Groups: For the Church, the first responsibility is the constant, clear teaching of the Faith, and therefore, of objective moral truth, including the truth about sexual morality. In an era of permissiveness and moral confusion, this requires that the Church be a prophetic voice and often a sign of contradiction.
The so-called "ethic" of immediate personal gratification is fundamentally opposed to integral human growth and fulfillment.

Education for family life and indeed for responsible life in society requires formation in chastity and self-discipline. By contrast, pornography and wanton violence can blind individuals to the divine image in the human person, can weaken marriage and family life, and can do serious harm to individuals and to society itself.

Whenever possible, the Church must join with other churches, denominations and religious groups in teaching and fostering this message. It must also make the best possible use of its own institutions and personnel to give education and formation concerning the media of social communications and their proper role in individual and social life. Special attention should be given to assisting parents in their efforts.
Thus, media education belongs in Catholic schools and other educational programs, in seminaries[8], in formation programs of religious and secular institutes, in the continuing formation of priests and in parish programs for youth and adults. Priests and Religious in pastoral and educational work should themselves be discriminating consumers of media who give good example in what they read and view.

32. This document is intended to address the widely expressed concerns of families and of the shepherds of the Church and to invite even more general reflection of an ethical and practical nature on the problem of pornography and violence in the communications media. It is also intended to encourage all to follow the injunction of St. Paul: "Do not be overcome by evil, but overcome evil with good" (Romans 12:21).

So you can imagine my surprise earlier today when a Catholic priest on Twitter gave this shout out to the FX Channel’s “Sons of Anarchy”.

I actually did a double-take when I saw this priest give this endorsement for a show so full of sex and violence that I couldn’t believe what I was seeing.  I even asked a friend and she suggested it might be a “fake” priest on Twitter.  Unfortunately, he’s a real priest.

I spent hours today debating whether or not to write this.  Part of me said, don’t put the spot light on this priest, while another part of me said, ‘He put the spot light on himself when he tweeted to over 1,000 followers on Twitter’.  I asked the priest if he felt at all bothered by all the sex and violence on this particular show, he said “not so much, thankfully. God bless”.

I have to say, that was THE strangest blessing I have ever gotten from a priest.

Now I am not writing this to attempt to shame this priest, he has indicated no shame in his viewing preferences or in sharing such sex and violence programs with his 1,000 followers on Twitter.  He put it publicly out there, so I feel no wrong in sharing my views on this.  I am writing this to tell people this priest is wrong, even if he doesn’t personally FEEL he is wrong.  He is.  And I hope that others reading this, especially Catholics who wish to be in good standing with their Faith, will SEE how wrong this priest is and learn from his mistake.

We aren’t to watch, read or listen to things that can damage our souls.  And worst yet, spread that damage to OTHER SOULS.  We ARE our brother’s keepers.  What we say and do has a ripple effect on all those around us.  Especially in today’s society with social media, the ripple effect is global!  With one stroke of the keyboard a person has the ability to cause someone to stumble into sin.  How much more is the responsibility of our Catholic clergy to lead us, not only by words in a homily, but by their own personal example?
I am reminded of the words of Saint Paul… how priests ARE our Fathers through the Gospel and it is their responsibility to correct us and teach us God’s way.

14 “I am not writing this to make you ashamed, but to admonish you as my beloved children. 15 For though you might have ten thousand guardians in Christ, you do not have many fathers. Indeed, in Christ Jesus I became your father through the gospel.”

So to the priest on Twitter, while I am NOT your father, you are mine and this time you are wrong and need the correction.  I do this not to shame you, but to help guide you along the Church’s teachings in the way of Saint Paul.