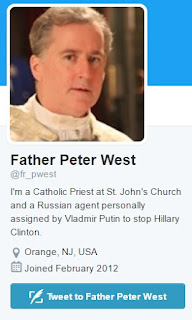 New Jersey reporter Mark Mueller has a bone to pick with Fr. Peter West because Fr. West calls it like he sees it.

Mueller opines that Fr. West: "assailed millennials as "snowflakes" who attend "cry-ins" and described liberals as "smug and arrogant" people who find solace in puppies and Play-Doh."

Quote: "Some colleges, such as Brown University, have set aside safe spaces with coloring books, cookies and Play-Doh." (Source: The Detroit News)

Quote: "One of the dorms on campus (UPenn) even set up a “breathing space” the night after election day. Cats, a puppy, coloring pages, and snacks were offered to help students “decompress in a low-key and low-stress environment.”  (Source: The Statesman)

Quote: "Were West some random internet flamethrower, his posts might garner a shrug in an age of intense political division and social media rancor.

But West, 57, is a Catholic priest in the Archdiocese of Newark, and some of his withering attacks, while popular with many of his 7,300 Facebook followers from around the country, run counter to the statements and philosophies of his own leader, Newark Cardinal Joseph W. Tobin, and his ultimate boss, Pope Francis.

Perhaps more significant, West's online behavior breaks with the longstanding protocol that religious figures should refrain from political bomb-throwing or the disparagement of other faiths, experts say.

The reluctance to campaign from the pulpit is rooted in the broad notion of separation of church and state and, more specifically, in a 1954 federal law."

What "experts" is Mueller referring to that can't distinguish between an American citizen's Twitter/Facebook accounts and a homily given from the pulpit?

Priests don't lose their freedom of speech because they are priests- at least not yet in this country.  And if President Trump has his way (please God, hear our prayer!) clergy will be able to preach without fear of the government freely all the teachings of the Church.


IV. POSITIONS OF CATHOLIC POLITICIANS
WITH REGARD TO LEGISLATION IN FAVOUR
OF HOMOSEXUAL UNIONS

10. If it is true that all Catholics are obliged to oppose the legal recognition of homosexual unions, Catholic politicians are obliged to do so in a particular way, in keeping with their responsibility as politicians. Faced with legislative proposals in favour of homosexual unions, Catholic politicians are to take account of the following ethical indications.
When legislation in favour of the recognition of homosexual unions is proposed for the first time in a legislative assembly, the Catholic law-maker has a moral duty to express his opposition clearly and publicly and to vote against it. To vote in favour of a law so harmful to the common good is gravely immoral.
When legislation in favour of the recognition of homosexual unions is already in force, the Catholic politician must oppose it in the ways that are possible for him and make his opposition known; it is his duty to witness to the truth. If it is not possible to repeal such a law completely, the Catholic politician, recalling the indications contained in the Encyclical Letter Evangelium vitae, “could licitly support proposals aimed at limiting the harm done by such a law and at lessening its negative consequences at the level of general opinion and public morality”, on condition that his “absolute personal opposition” to such laws was clear and well known and that the danger of scandal was avoided.(18) This does not mean that a more restrictive law in this area could be considered just or even acceptable; rather, it is a question of the legitimate and dutiful attempt to obtain at least the partial repeal of an unjust law when its total abrogation is not possible at the moment." (Source: The Vatican)

Wouldn't it be grand to hear a priest's homily, particularly in Washington D.C. tell a parish full of Catholic politicians (if it exists) that they cannot support in anyway gay unions and that they (the politicians) must vote against all such laws?

We can dream, hope and pray such a day comes!

Quote: "West's targets have varied over the years -- he once criticized former Republican Speaker John Boehner as "easy prey" for Obama -- but his bread-and-butter subjects are Democrats, particularly liberal Democrats, and Muslims.

On Nov. 12, for instance, he shared a post that read: "Liberals are acting like Trump is going to kill all the gays, make slavery legal again and take away women's rights. ... Like he's a Muslim or something."

It is Muslim countries that "take away women's rights" have slavery and kill gays - that is why so many (mostly Christians) oppose shariah law!


"Human rights in Islamic countries have been a hot-button issue for many decades. International non-governmental organizations (INGOs) such as Amnesty International (AI) and Human Rights Watch (HRW) consistently find human rights violations in Islamic countries. Amongst the human rights issues that are frequently under the spotlight are gay rights, the right of consensual sex outside of marriage, individual freedom of speech and political opinion.[1] The issue of women’s rights is also the subject of fierce debate.[1]When the United Nations adopted the Universal Declaration of Human Rights (UDHR) in 1948, Saudi Arabia refused to sign it as they were of the view that shariah law had already set out the rights of men and women.[1] To sign the UDHR was deemed unnecessary.[2] What the UDHR did do was to start a debate on human rights in the Islamic world. Following years of deliberation, the Organisation of the Islamic Conference (OIC) adopted the Cairo Declaration of Human Rights in Islam." (Source: Wikipedia)

So again, Fr. West is calling it exactly like it is and the left are running for their safe-spaces while filing complaints against Fr. West for being truthful - something the Left never wants- the truth!

God bless Fr. Peter West!  A priest with a spine who tells it like it is!