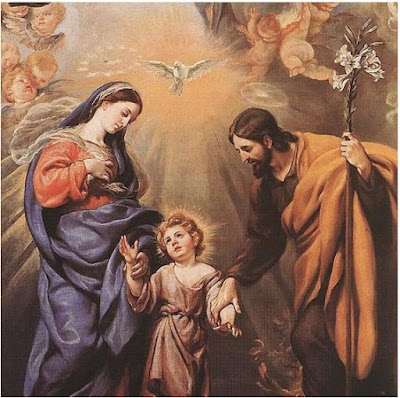 St. Joseph, the pure spouse of the Blessed Virgin Mary and foster father of our Blessed Lord, was descended from the royal house of David. He is the "just man" of the New Testament, the lowly village carpenter of Nazareth, who among all men of the world was the one chosen by God to be the husband and protector of the Virgin Mother of Jesus Christ, God Incarnate. To his faithful, loving care was entrusted the childhood and youth of the Redeemer of the world.

After the Mother of God, not one of the children of men was ever so gifted and adorned with natural and supernatural virtues as was St. Joseph, her spouse. In purity of heart, in chastity of life, in humility, patience, fortitude, gentleness and manliness of character, he reveals to us the perfect type and model of the true Christian.

Poor and obscure in this world's possessions and honors, he was rich in grace and merit, and eminent before God in the nobility and beauty of holiness. Because St. Joseph was the representative of the Eternal Father on earth, the divinely appointed head of the Holy Family, which was the beginning of the great Family of God, the Church of Christ, on December 8, 1870, the Vicar of Jesus Christ, Pope Pius IX solemnly proclaimed the foster father of Jesus, Patron of the Universal Church, and from that time his feast has been celebrated on March 19th as a feast of high rank. In some places it is observed as a holy day of obligation.

Devotion to St. Joseph, fervent in the East from the early ages, has in later times spread and increased in such a marvelous way that in our day the Catholics of all nations vie with one another in honoring him. Besides the feast of March 19th there is another feast called the "Patronage of St. Joseph", which is celebrated in the more joyous Easter time. It was formerly observed on the third Sunday after Easter, but it is now celebrated with the octave on the Wednesday before the third Sunday after Easter, and its title is "The Solemnity of St. Joseph, Spouse of the Blessed Virgin Mary and Patron of the Universal Church."

From his throne of glory in heaven, St. Joseph watches over and protects the Church militant, and no one who calls on him in need ever calls in vain. He is the model of a perfect Christian life and the patron of a happy death. His patronage extends over the Mystical Body of Christ, over the Christian family, the Christian school, and all individuals who in their need appeal to his charity and powerful intercession, especially in the hour of death; for he who, when dying, received the affectionate ministry of his foster Son, Jesus, and his Virgin spouse, Mary, may well be invoked and trusted to obtain for us poor sinners the mercy of God and the grace of a peaceful and holy death.

Prayer: We beseech You, O Lord, that we may be assisted by the merits of the Spouse of Your Most Holy Mother, so that what we cannot obtain by our own power may be given to us through his intercession. Amen.