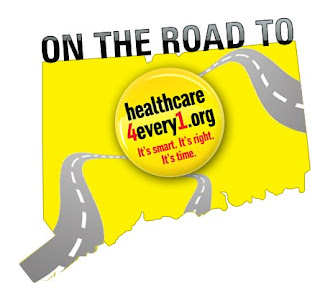 The following is an announcement from Connecticut Catholic Conference:

Access to quality and affordable health care for every one of Connecticut’s citizen is the goal of many health care advocates around the state. The Connecticut Catholic Conference has been an active participant in the call for health care reform in our state. The United States Conference of Catholic Bishops has also been supportive of reform efforts on the national level. Catholic social teaching holds health care to be a basic human right. This is reflected in the long history of the Catholic Church’s involvement in providing health care services within our own state and throughout the world.

The continuing increase in medical costs and its financial burden on business and family budgets, and the large number of uninsured persons, are the two primary factors pushing the calls for reform. These calls are being slowly answered by Connecticut’s General Assembly and Governor. During the 2007 session of the General Assembly two special health care authorities were established to examine various aspects of the health care issue in Connecticut. The HealthFirst and Primary Care Access Authorities having been recently holding public hearings around the state and will be reporting their findings to the legislature in 2009.

Also, at the strong urging of the Governor the Charter Oak Health Plan was established in 2008 to help cover uninsured persons. This plan has encountered a slow and problematic start, but is beginning to build momentum. However, this plan still falls short of the goal of affordable and quality health care for everyone.

The 2009 legislative session is expected to see intense activity on the issue of health care reform. The reports from the special state health care authorities and a major proposal from the Connecticut based Universal Health Care Foundation are sure to stimulate intense discussion. The reality of an ever increasing state budget deficit is also expected to impact the debate and any possible outcomes. However, the need for health care reform is clear as thousands of people within our state lack employer sponsored insurance or can not afford to purchase their own health care coverage. The uninsured also cause a continuing strain on our health care system as doctors and hospitals continue to provide care, but with little or no compensation for their services. These providers are dependent on the state and its taxpayers to help cover these uncompensated expenses.

Please try to attend one of the events below to show support for health care reform and learn more about the issue.

Special Note: The Connecticut Catholic Conference has not endorsed a particular health care proposal at this time, but urges action on this critical issue. Although an increasing state budget deficit may make addressing this issue difficult, it needs serious legislative discussion and consideration. As the economy worsens so will the number of people without health care coverage.
On the Road to Healthcare4every1
Healthcare4every1 campaign road shows coming to a town near you…
The Healthcare4every1 Campaign will be taking the show on the road starting December 9th in Torrington (see schedule below).
The Road Show will be crossing the state and ending in Hartford on January 13th with the unveiling of the complete Healthcare4every1 proposal.
Save the Date
Tuesday, December 9th 5:30pm – Torrington – Torrington City Hall at 140 Main St.
Wednesday, December 10th 6:00pm – Hamden – Hamden Middle School at 2623 Dixwell Ave