We Survived Having A “Merry Christmas” 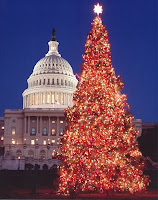 Contributor Doug writes: As a practicing Christian, one blessing I appreciated this year leading up to Christmas was the pleasant surprise that wherever I went, I heard and read much more of “Merry Christmas, Happy Hanukkah, and Happy New Year” than “Happy Holidays.” At last, the battle to preserve Christ in Christmas while also now truly respecting the faiths of others has won some ground, and somehow, we’ve all survived.
The United States is comprised predominantly of Christians. Even many Christians who do not practice their faith, and even non-Christians recognize and/or celebrate “Christmas.” Besides, “Happy Holidays” is as potentially offensive to Jews as it is to Christians. It recognizes no specific holiday, and in fact, pointedly avoids it. If we are in fact trying to avoid giving offense, then it is far more prudent and polite to make an effort to get to know another’s faith and then take the time and thought to extend to that person the far more personal and welcoming greeting appropriate to his or her faith or culture. I have found that both my Christian and Jewish friends and associates alike have responded gratefully to this more direct, respectful, and intimate alternative.
Contrary to popular but erroneous belief, “Happy Holidays” was never intended to be sensitive to the feelings of non-Christians. This agenda has been promulgated and thrust onto us by the secular and particularly anti-Christian group, the American Humanist Association. Various other secularist groups and individuals with a vitriolic agenda against our Savior, His Church, and His birthday have since jumped on the bandwagon and snowballed this agenda right on queue. I have yet to ever hear any protest to the public display of a Menorah anywhere, nor would I ever welcome hearing any such protest. Yet such cannot be said of a publicly displayed Nativity scene. Instead, we Christians are told to take it or leave it with snowmen and so-called “Holiday” trees, whatever they are.
Our much abused and often maligned First Amendment merely states that specifically the Congress shall not make any law respecting the establishment of any religion, such as was the case in Mother England before our Revolution, and ironically, for a quite a long time here in Connecticut after the colonies won their independence. What secularists conveniently forget however, is that the First Amendment also states that Congress shall not ban the free exercise of any religion, which is to say that all religions should be mutually respected.
Political correctness for the myopically misled is as deceptively dangerous as the alluring Sirens of Greek mythology were for the lonely ship captains navigating toward the shallow shoals beneath them. In our obsessive quest for so-called “diversity,” and “equality” we often sidestep our naïve but well-intended efforts and only wind up discriminating against a group different from the one we were originally trying to protect. Our Declaration of Independence articulates our correct recognition of our God-granted rights and human dignity that (in the vernacular of that period), all “men” are created equal, and yes, you ladies as well. Yet “affirmative action” equates to quotas limiting opportunities for different types of individuals, and in employment, often while turning a blind eye to qualifications. “Hate crimes” elevate the status of one type of citizen over another by increasing the penalty for a crime that already appears elsewhere in the Penal Code, but for everyone else except for the synthetically special citizens cited. And last but not least, the “Happy Holidays” hyperbole, and all the ridiculous litigation that has sprung from it from municipalities and school boards across the country effectively bans all semblance of Christianity within their purview while giving a wink and a nod to other more favored denominations and trendy causes.
The engraved verbiage on the currency of our nation, a nation founded on Judeo/Christian principles, has it right twice: 1.) “In God we trust,” and 2.) “E Pluribus Unum,” Latin for “Out of many, one.” Those ignorant of the true meaning and history of the term, “separation of Church and state” would do well to edify themselves accordingly, and then reflect on what they read on their pocket change. As for those who do know but don’t care, or intentionally manipulate the separation principle to forward their own devious agenda, they should be openly identified, consistently challenged, and zealously chastised.
Lastly, it would behoove all of us to reflect upon the sage poem, “First They Came..” from Martin Niemoller, a Lutheran theologian imprisoned in Hitler’s concentration camps for turning against the Nazi’s. In our “United States,” when we so sanctimoniously and cavalierly justify persecuting one group of people for the perceived and /or contrived sake of another, like blind lemmings for the politically correct cause celebre’, history brutally dictates that we earnestly ask ourselves, “When am I next?”
To all of my fellow citizens, Happy New Year, and may God bless you.