In a recent (and wonderful) interview, Cardinal Raymond Burke made it perfectly clear (I just love when our clergy speak in no uncertain terms) that Nancy Pelosi could NOT have Holy Communion at Mass because of her support and work on behalf of child killing- abortion.

Cardinal Burke said in his interview regarding Nancy Pelosi, Holy Communion and Canon Law 915: “Certainly this is a case when Canon 915 must be applied. This is a person who obstinately, after repeated admonitions, persists in a grave sin — cooperating with the crime of procured abortion — and still professes to be a devout Catholic. This is a prime example of what Blessed John Paul II referred to as the situation of Catholics who have divorced their faith from their public life and therefore are not serving their brothers and sisters in the way that they must — in safeguarding and promoting the life of the innocent and defenseless unborn, in safeguarding and promoting the integrity of marriage and the family.

What Congresswoman Pelosi is speaking of is not particular confessional beliefs or practices of the Catholic Church. It belongs to the natural moral law which is written on every human heart and which the Catholic Church obviously also teaches: that natural moral law which is so wonderfully illumined for us by Our Lord Jesus Christ by His saving teaching, but most of all by His Passion and death.
To say that these are simply questions of Catholic Faith which have no part in politics is just false and wrong. I fear for Congresswoman Pelosi if she does not come to understand how gravely in error she is. I invite her to reflect upon the example of St. Thomas More who acted rightly in a similar situation even at the cost of his life." [End] 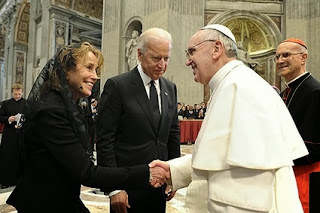 But…umm… what about Joe Biden?

He’s still pretending to be Catholic isn’t he?

How about taking on the Vice President who is guilty of the EXACT same thing as Nancy Pelosi?

Why didn’t anyone put their foot down to the Kennedy boys?

If you are going to put your foot down (and you should), let it come down on ALL the guilty parties.  And don’t forget the mental midgets calling themselves “nuns” riding buses and waving rainbow flags in support of “gay marriage”.

Let the Church REALLY enforce Canon Law 915 with an across the world excommunication for Catholics who do what Pelosi does?  Let's not single one out one from among the hordes, lets apply it to all who are guilty.

Quote: “Bishop Heriberto Bodeant, secretary for the Uruguayan bishops’ conference, said the lawmakers essentially excommunicated themselves by voting for abortion.
“Automatic excommunication is for those who collaborate in the execution of an abortion in a direct way,” he said. “If a Catholic votes…with the manifest intention that he thinks the Church is wrong about this, he separates himself from the communion of the Church.”[End]

Ooops! *another case of Catholic whiplash*

That’s right, you publicly called them excommunicated, then the media went crazy and the next day it was all a terrible “misunderstanding” and the Church backpedaled and the media "updated" the story.

Update quote:  “The Uruguayan bishops’ conference has explained recent statements regarding Catholic lawmakers who voted to legalize abortion in the country, saying they are not excommunicated if they voted in favor of abortion.“Excommunication applies to Catholics who have acted directly in carrying out an abortion, which does not include those who vote for a law that allows it,” Bishop Heriberto Bodeant, secretary general of the conference said.”[End]

How about we stop playing games, end the Catholic whiplash from our Bishops and enforce what Church Canon Laws say to enforce?  If you don’t… what’s the point in writing Canon Law?

Julie @ Connecticut Catholic Corner
Canon Law Can.  #915 Those who have been excommunicated or interdicted after the imposition or declaration of the penalty and others obstinately persevering in manifest grave sin are not to be admitted to holy communion.