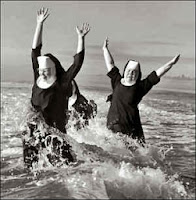 Yeah, I know, just when you thought the stupid couldn’t get any more stupid they out do themselves.

The author claims "It's not a joke", he's right... it's a delusion and lie.  Women are not now or ever being named Cardinals in Christ's Holy Catholic Church. Period.

After the author claims it's not a joke, he then claims to know what the Pope has been thinking, just how he sees into the Pope's brain is not revealed in the article.

Reading this is like watching a game of Twister. But when you don't speak clearly, the progressive mental midgets will get brain cramps twisting their minds around what they WISH would happen. Notice the "it was AS IF" he said...blah, blah, blah.  Someone...perhaps Cardinal Burke, will speak clearly and stop this nonsense.  We can only hope.

Here is the insane and false claim ripping through the Internet…


It’s not a joke. It’s something that Pope Francis has thought about before: naming a woman cardinal. Those who know the pope, both before and after he took over from Ratzinger, say that the first Jesuit pontiff is not only surprising people with his comments, but also with his actions. And this has been happening throughout his first six months in the role.

Those who think that Francis – who has all the simplicity of a parish priest – is a naïve man are wrong. This pope isn’t an ordinary pope. He has come to St. Peter’s with concrete plans for the Catholic Church: he wants to revive Christianity by taking it back to its origins.

The symbolism of his actions began when he first appeared on the balcony at St. Peter’s, calling himself “a bishop” and asking the people to bless him. Since then, he has wasted no time in making unexpected decisions, which have shocked those both inside and outside the Church.

And he will continue to do so, especially with his plans to appoint a female cardinal. He knows that a woman’s role in the Church is an unresolved issue that cannot wait any longer. He was clear about this during his interview with La Civiltà Cattolica last week. “The Church cannot be herself without the woman and her role,” he said. “The woman is essential for the Church. Mary, a woman, is more important than the bishops. I say this because we must not confuse the function with the dignity.”

In other words, it was as if Pope Francis was saying: “The Church isn’t complete because the woman’s role is missing.”

How can he introduce that essential component? He answered the question himself during the interview: “We must therefore investigate further the role of women in the Church. We have to work harder to develop a profound theology of the woman.”And that theology, according to the pope, cannot be construed within the Vatican’s walls.” The feminine genius is needed wherever we make important decisions,” he said.

He may pave the way with discussions that urgently put the issue of a woman’s role in the Church on the table, or better yet, “in front of the altar.” And one of those gestures could be the naming of the first female cardinal. Is that feat impossible? No, because canonical law states that cardinals don’t have to be priests, they can be deacons.Some would argue that women are not allowed to be deacons as they were 800 years ago among the first Christian communities. But this is one of the reforms that Francis has in mind; it is not based on any dogma. A woman could become a deaconess tomorrow if he so desired.

As Phyllis Zagano of Loyola University in Chicago, an expert on the issue, wrote: “A female deaconess is not an idea for the future. It is an issue for the present and today."

Zagano brought up the matter with Cardinal Ratzinger before he became pope. “This is something that is being studied,” he told her. Pope Benedict XVI did not follow through but Pope Francis might.The Armenian Apostolic Church and the Greek Orthodox Church, which have close links to the Vatican, both have deaconesses.Any woman who is appointed deaconess can indeed become a cardinal without having to change canonical law.Cardinals serve as advisors to the pope and their primary function is to elect a new pontiff.

“Knowing this pope, he wouldn’t hesitate before appointing a woman cardinal,” said one Jesuit priest. “And he would indeed enjoy being the first pope to allow women to participate in the selection of a new pontiff.”

I don’t know if any Jesuit priest actually said the above or if Juan Arias is just delusional.  If the "priest" did say it, I would remind him of what just happened to former priest Reynolds who was defrocked and excommunicated for teaching and supporting the issue of women priests (among other things).
In any case, THE Holy Catholic Church will NEVER see a woman cardinal, bishop or priest.  This is just another fantasy among the progressives.

Canon Law on Cardinals:THE CARDINALS OF THE HOLY ROMAN CHURCH

Can. 351 §1. The Roman Pontiff freely selects men to be promoted as cardinals, who have been ordained at least into the order of the presbyterate and are especially outstanding in doctrine, morals, piety, and prudence in action; those who are not yet bishops must receive episcopal consecration.