Oops he did it again! Pope Francis' 2nd Interview 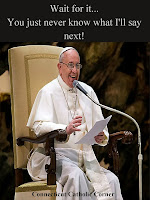 Pope Francis has again given an interview and again it looks bad… worse actually than the first interview.
So what is the WORST EVIL IN THE WORLD today?

According to Pope Francis it’s the terrible unemployment rate.

If I saw the quote without knowing the author,  I would have thought Obama said it.

Here is the quote:

Pope Francis says: "The most serious of the evils that afflict the world these days are youth unemployment and the loneliness of the old. The old need care and companionship; the young need work and hope but have neither one nor the other, and the problem is they don't even look for them any more. They have been crushed by the present. You tell me: can you live crushed under the weight of the present? Without a memory of the past and without the desire to look ahead to the future by building something, a future, a family? Can you go on like this? This, to me, is the most urgent problem that the Church is facing."

When Pope Francis is asked about those who helped shape his faith he mentions a few saints but fails to mention the saint who founded his order so he is asked why not Ignatius?  He then goes on to talk about Ignatius and then to name Martini- the same Martini who wrote 'Credere e conoscere' promoting the right of gays to marry and his desire to see the Church accept gay civil unions.  He also promoted the right to euthanasia and wanted civil laws to protect “doctors” who helped their patients die. Yeah, THAT Martini. If that is the guy who shaped Pope Francis' faith...the progressives just might have a right to celebrate. :(

Pope Francis says: "Ignatius, for understandable reasons, is the saint I know better than any other. He founded our Order. I'd like to remind you that Carlo Maria Martini also came from that order, someone who is very dear to me and also to you. Jesuits were and still are the leavening  -  not the only one but perhaps the most effective  -  of Catholicism: culture, teaching, missionary work, loyalty to the Pope. But Ignatius who founded the Society, was also a reformer and a mystic. Especially a mystic."

At this time, I can’t in good conscience say another word about this Pope… so I will leave you with a link to the disgraceful full interview as I go pray to God for help with the future our Church and it’s leadership.