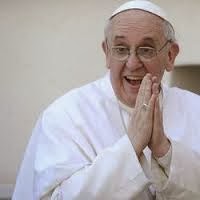 Elizabeth Scalia over at Patheos’ The Anchoress recently wrote a post “If we ‘get’ Francis, we have to absorb his lessons”.

Personally, I don’t think the issue so many people are having with Pope Francis is over “his lessons”.  Rather, I think its over how he comes across in his interviews.   Which, by the way, Creative Minority Report reminded us all that in July, during WYD, Pope Francis said: "It's true I don't give interviews. I don't know why. I just can't. It's tiresome," he said. "But I enjoy your company."

Really?  Guess that is a thing of the past now.

Anyway, after reading The Anchoress and thinking on what she said, I commented with the following on her blog (someone asked me to clarify who “we” are in my comment, so I am doing that here):

Me: “I think (could certainly be very wrong) but I THINK the issue for many Catholics is all this "love" talk is reminding us of the HUGE FAILURE of the hippy generation who wanted to just talk "love" and "tolerance". The fruit of love talk without correction or pointing to sin, is...well, what we [the world in general ‘we’] have today: abortion, divorce/remarriage, drop in Church attendance, disbelief in the Eucharist, gay marriage, euthanasia and more. We [the ‘we’ are Catholics who freak out each time the Pope gives an interview] don't want a "Hippie Pope" who talks merely of love- we NEED and desire to hear the good AND the bad of life. Sin. The consequence of sin. Jesus ACTED in love, but He SPOKE about sin, repenting and the consequence of sin- damnation. There MUST be balance and so far many Catholics (myself included) are only seeing the "warm fuzzies" of hippy-type love talk and that makes us very uneasy because we know what a disaster that is. JMO” [end comment]

That is what I think is freaking out so many Catholics here in the United States (and perhaps around the world) with these interviews. (To my knowledge no one is freaking out over homilies etc).  The hippy “love and tolerate” everything movement of the 1960’s is still too fresh in our minds.  We see the TOTAL destruction of that decade and it’s effect on the decades that followed.  Rules were tossed out and the warm fuzzies of LOVE replaced them.

What’s so wrong with rules?

Can you play a board game in which each player makes up their own rules and plays by them, while the other players do the same?

If no one follows the rules chaos erupts.  That is what we have especially among the "progressive" Catholics.  No rules...chaos.

The Catholic Church is not a dictatorship because it teaches the consequences of sin.

Jesus Christ made the “rules” clear (at least to my mind).  Jesus ACTED in LOVE, but SPOKE about sin and the consequences of not following the “rules”.   The “rules” are, we must repent of sin or risk our salvation.  That’s a big deal.  As a matter of fact, that is THE most important aspect of every human life- their soul’s salvation.  Jesus was tortured and died FOR our salvation- it is that important to Him.  Shouldn’t the souls of all humans be just as important to all Catholics?

If we (Catholics) don’t tell people the “rules” HOW can they ever win the end game? Salvation.
If they don’t know what sin is because we spend all our time talking about the warm fuzzies of love when will they repent or even know what to repent of?

I think the Pope is doing a great job with getting the “be humble”, “be loving”, “help the poor” message out there, but that is only PART of it. It’s my own personal opinion that he is (so far) dropping the ball on the rest of Christ’s Gospel Message- REPENT!

If people are humble, loving and help the poor but remain in mortal sin… what do the “rules” say about dying in mortal sin?

Catholic Catechism #1033    We cannot be united with God unless we freely choose to love him. But we cannot love God if we sin gravely against him, against our neighbor or against ourselves: “He who does not love remains in death. Anyone who hates his brother is a murderer, and you know that no murderer has eternal life abiding in him.”612 Our Lord warns us that we shall be separated from him if we fail to meet the serious needs of the poor and the little ones who are his brethren.613 To die in mortal sin without repenting and accepting God’s merciful love means remaining separated from him for ever by our own free choice. This state of definitive self-exclusion from communion with God and the blessed is called “hell.” (1861, 393, 633)

Catholic Catechism #1457    According to the Church’s command, “after having attained the age of discretion, each of the faithful is bound by an obligation faithfully to confess serious sins at least once a year.”56 Anyone who is aware of having committed a mortal sin must not receive Holy Communion, even if he experiences deep contrition, without having first received sacramental absolution, unless he has a grave reason for receiving Communion and there is no possibility of going to confession.57 Children must go to the sacrament of Penance before receiving Holy Communion for the first time.58 (2042, 1385)

Do we or don’t we have to repent from mortal sin?

If people aren't told what sin is, how do they repent from it?

I’d like to hear Pope Francis speak the words that lead to repentance and salvation.  I actually fear all his “love” talk in interviews because they are being received as an OK to continue in sin as if the sin is acceptable. I do not doubt for a moment that this pope has GREAT love for people, but then I never doubted that Benedict or JPII had great love for people also.  I think the greatest way to love people is to tell them the WHOLE Gospel message- love, sin and repentance.  The FULL Gospel Message is that Jesus died for our sins because of love for us.  The sin led to death because of love and if we put sin to death for love of God we will have eternal salvation with Him.  That's the goal at the end of life.  The three (sin, repenting and love) need to be preached together.

When you have “progressives” who support gay marriage and abortion and euthanasia CHEERING for the Pope, you KNOW they are not understanding 1) what sin is, 2) the need to repent from it, and 3) that mortal sin will send them to Hell for all eternity.

That is what worries me every time the Pope gives an interview.  He’s not telling the whole story, only the warm fuzzy bits and people are dying in damnation because they aren’t hearing the words of salvation.  Cardinal Burke in his interview told the FULL Gospel Message, I have yet heard it from Pope Francis.

That’s a problem for me.

To be clear, I do NOT believe Pope Francis is a "Hippie Pope", I merely think his interviews are reminding SOME Catholics of the destructive hippie movement of the 1960's in the United States and it's worrying us.