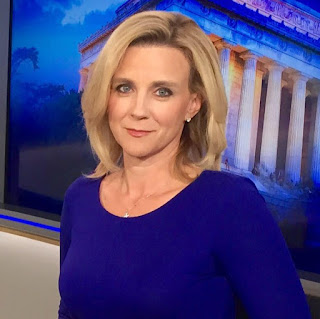 “I am pleased to welcome Lauren Ashburn to EWTN and our ‘EWTN News Nightly’ team,” said Network Chairman & Chief Executive Officer Michael P. Warsaw. “With her years of experience covering the political scene in Washington, D.C. for major news outlets, Lauren is a great addition to ‘EWTN News Nightly,’ particularly as we enter into the 2016 election season.

“Lauren’s ability to combine her proven journalistic skills with a solid understanding of the Catholic faith will enable EWTN to continue to expand the level of news coverage we offer our viewers every day,” said Warsaw.

Ashburn will focus her efforts on matters of public policy important to Catholics in the United States and abroad including religious liberty, immigration, and developments pertaining to the right to life.
"After more than 20 years in journalism, I'm thrilled to be joining EWTN directing political coverage and covering the White House in what will be one of the most important elections in our lifetime,” said Ashburn.  ”We'll go beyond the press releases and campaign stump speeches and hold politicians accountable while focusing on issues important to Catholics worldwide."

Ashburn has served as a commentator and analyst for news outlets including PBS NewsHour, CBS This Morning, NBC, MSNBC, CNN, and other print and broadcast platforms. Ashburn comes to EWTN from Fox News, where she appeared on “The O’Reilly Factor,” “The Kelly File,” and weekly on “Media Buzz.”  Her views on politics, women in the workplace, motherhood, and her perspective as a pro-life Catholic have been widely published in print and online.

She serves as president and CEO of Ashburn Media Company, a media consulting and production firm she founded in 2010, and contributes weekly to “The Hill.”

Prior to her stint at Fox, Ashburn served as managing editor of Gannett Broadcasting and USA Today Live. While at USA Today, she ran the television division, where she executive-produced award-winning television and web series, and documentaries. Before arriving at USA Today, Ashburn worked as a reporter/anchor with WJLA-TV, the ABC affiliate in Washington, DC, and at WHP-TV, the CBS affiliate in Harrisburg, Pennsylvania, as a reporter/morning anchor.

Ashburn received her Master's Degree in Journalism from Columbia University and her Bachelor's Degree from Albright College. She was awarded Albright’s Young Alumna Achievement Award for career performance.  She lives in Washington, DC, with her husband and three children.


EWTN Global Catholic Network, in its 34th year, is the largest religious media network in the world. EWTN’s 11 networks broadcast the Gospel message in multiple languages 24 hours a day, seven days a week to over 258 million television households in more than 140 countries and territories. Properties include direct broadcast satellite television and radio services; AM & FM radio networks transmitted through SIRIUS/XM, iHeart Radio, and almost 500 Catholic domestic and international radio affiliates; a worldwide shortwave radio station; the largest Catholic website in the U.S.; electronic and print news services, including “The National Catholic Register” newspaper, and two global wire services; as well as a publishing arm.

Enter Your Commercial in EWTN’s Cool 2B Catholic Contest

Irondale, AL (EWTN) – Click on the image below to get details about entering EWTN’s Cool 2B Catholic contest or view the attachment, and go to https://c2bc.ewtn.com for details. Please forward this to every Catholic student you know in high school, college, or film school! 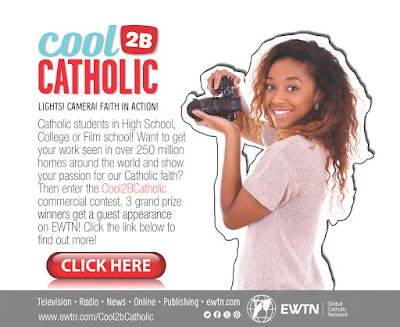