Why don't we just call it cross-dressing?


5 A woman shall not be clothed with man’s apparel, neither shall a man use woman’s apparel: for he that doeth these things is abominable before God. 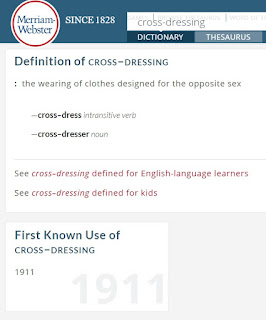 Many years ago I worked part time in a friend's specialty kitchen store. One day a week, every week a fifty-something cross-dressing man would come into the store dressed like June Cleaver with a full beard and mustache clutching a pastel colored vintage purse that matched his size 14 pumps and pillbox hat perched on his crew-cut shaved head.

He looked ridiculous and I pitied him.  The man was sick and it didn't appear anyone was helping him or perhaps the help wasn't helping. Whatever the case may have been the reactions by the public were the same...pity ("Oh the poor pitiful man", disgust and more than one person saying the man was a sandwich short of a picnic. He was an oddity.

Not so much today and it's only going to get worse if progressives continue to corrupt society.

First we had Bruce Jenner making progressives go all a flutter with him as their new "her" transgender poster..."girl". Then late last year we had makeup dynasty Covergirl hiring a gay young man to be their make up "covergirl/boy"... 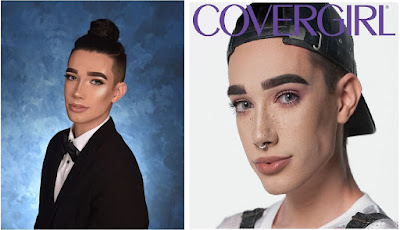 And now (of course) the insanity is spreading... 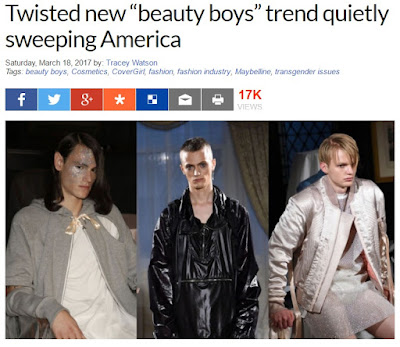 Article quote I happen to agree with:


Mike Adams, the Health Ranger, describes transgenderism and biological subjectivism as “a politically correct demand that everyone agree to participate in the mental distortions of a few individuals who suffer from a psychological disconnect from their biological realities. Such ideologies stand in complete contradiction to the known science on biology and physical reality, and sadly, this mental distortion is now being thrust onto children as part of a sick, demented political agenda to appease the most lunatic fringe elements of the political spectrum.”

We've all heard about the bathroom and locker room chaos happening in schools across this nation, but few are talking about the indoctrination of our elementary school children with transgender children's books.

Standard reading material for young children from grades K and up include books like "Jacob's New Dress" (a boy wants to wear a girls dress to school) and... "Red" by Michael Hall. 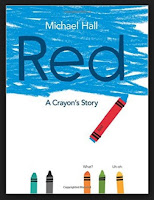 Description: A blue crayon mistakenly labeled as "red" suffers an identity crisis in this picture book by the New York Times–bestselling creator of My Heart Is Like a Zoo and It's an Orange Aardvark! Funny, insightful, and colorful, Red: A Crayon's Story, by Michael Hall, is about being true to your inner self and following your own path despite obstacles that may come your way. Red will appeal to fans of Lois Ehlert, Eric Carle, and The Day the Crayons Quit, and makes a great gift for readers of any age!
Red has a bright red label, but he is, in fact, blue. His teacher tries to help him be red (let's draw strawberries!), his mother tries to help him be red by sending him out on a playdate with a yellow classmate (go draw a nice orange!), and the scissors try to help him be red by snipping his label so that he has room to breathe. But Red is miserable. He just can't be red, no matter how hard he tries! Finally, a brand-new friend offers a brand-new perspective, and Red discovers what readers have known all along. He's blue! This funny, heartwarming, colorful picture book about finding the courage to be true to your inner self can be read on multiple levels, and it offers something for everyone.

I truly pity the young children growing up in today's American society.  Most of them won't be sure a boy is a boy or a girl is a girl. Now with "Red" the crayon being read to them, they won't even know what color their crayons truly are any more!

Teaching your child that boys wearing girls clothes and girls wearing boys clothes is the definition of "cross-dressing" might just get them tossed out of school!  Facts no longer apply. Definitions change at the whims of society.  But the Catholic Faith stands firm and has always had the foresight to warn us of what was and is to come. Educating ourselves and our children in the Faith is essential to all of us - especially in times like these.


"After the year 1900, toward the middle of the 20th century, the people of that time will become unrecognizable. When the time for the Advent of the Antichrist approaches, peoples minds will grow cloudy from carnal passions, and dishonor and lawlessness will grow stronger. Then the world will become unrecognizable. Peoples appearances will change, and it will be impossible to distinguish men from women due to their shamelessness in dress and style of hair. These people will be cruel and will be like wild animals because of the temptations of the Antichrist. There will be no respect for parents and elders, love will disappear, and Christian pastors, bishops, and priests will become vain men, completely failing to distinguish the right-hand way from the left."
-St Nilus 5th Century AD (contemporary and defender of St John Crysostom)

In the 5th century this was seen yet so many today still can't see it right in front of their faces.


The devil loves chaos and confusion.

God is the author of Truth.

Let's call it what it is.