EWTN To Celebrate 100th Anniversary of Fatima
Month By Month, Message By Message 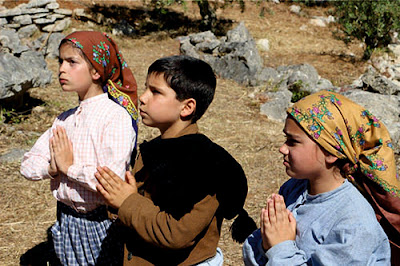 PHOTO CAPTION: The three Fatima seers, Francisco, Jacinta, and Lucia, in a scene for EWTN's "The Message of Fatima." This comprehensive eight-episode series will kick off 10 p.m. ET, Wednesday, May 10. Future episodes will air on the 13th of each month so the Fatima prophecies will unfold to viewers month by month, message by message.

Irondale, AL (EWTN) – EWTN will celebrate the 100th Anniversary of the apparitions of Our Lady of Fatima to three shepherd children in Fatima, Portugal with many original docu-dramas, movies, devotionals, and other specials that will air from May 10 through the anniversary of the Miracle of the Sun on October 13. Complete programming can be found at www.ewtn.com/fatima under the “programming” tab at the top of the page.

As part of EWTN’s continuing coverage, the Network will air the visit of Pope Francis to Fatima May 12-13 to canonize two of the three shepherd children to whom Our Lady of Fatima appeared 100 years ago.

Among the events the Network expects to carry on Friday, May 12 are the arrival ceremony at 11 a.m. ET, the Visit to the Chapel of Apparitions at 1 p.m. ET, and the International Rosary & Candlelight Procession at 4 p.m. ET. The Canonization Mass will air at 4 a.m. ET, Saturday, May 13, when the Pope visits with prime minister of Portugal and the Basilica, which is followed by the Mass at 5 a.m. ET (with an encore of the Mass at noon). Times are subject to change so please check www.ewtn.com/fatima or www.facebook.com/ewtnonline for updates.

Also this month, don’t miss the first two episodes of “The Message of Fatima,” an eight episode docudrama series, which was filmed mainly in Fatima, and also in a London studio using state-of-the-art special effects and motion graphics. Dramatizations are interspersed with expert interviews and comprise one of the most comprehensive film series on Fatima yet attempted.

The series kicks off with a special “EWTN Live” special with Director Stefano Mazzeo at 8 p.m. ET, Wednesday, May 10, followed by Episode 1, which focuses on the prophecies of the Angel of Peace, at 10 p.m. that same night. Episode 1 encores at 3 a.m. ET and 10 a.m. ET on May 11.) Episode 2, which tells the story of the first apparition of Our Lady, premieres at 11:30 a.m. ET and 6:30 p.m. ET, Saturday May 13. Future episodes will air on the 13th of the month in which they occurred, except for August, which will also air on the 19th because the children were in jail on August 13 and could not come to the apparition site.

Also of note among the many specials are:

“My Time with Jesus,” five episodes of EWTN’s popular animated children’s series, which will introduce children to the prophesies of the angel and the apparitions, and will individually profile the three seers: Francisco, Jacinta, and Lucia;
“Fatima: A Living Faith,” a summary of what was happening in the world prior to the apparitions as well as a comprehensive overview on the meaning and importance of the messages;
“The Little Shepherds of Fatima,” which includes footage of Pope John Paul II’s trip to Fatima for the beatification of Francisco and Jacinta Marto and Sister Lucia’s meeting with the Pope, details on the events that took place before the Martos’ deaths, and much more; and
“The Three Little Shepherds,” which offers fascinating insights and unexpected details into the spiritual lives and psychological profiles of the three children.

Please see www.ewtn.com/fatima for dates and times of these and numerous other specials.

EWTN Global Catholic Network, in its 36th year, is the largest religious media network in the world. EWTN’s 11 TV channels are broadcast in multiple languages 24 hours a day, seven days a week to over 268 million television households in more than 145 countries and territories. EWTN services also include radio services transmitted through SIRIUS/XM, iHeart Radio, and over 500 domestic and international AM & FM radio affiliates; a worldwide shortwave radio service; the largest Catholic website in the U.S.; electronic and print news services, including “The National Catholic Register” newspaper, and two global wire services; as well as a publishing arm.