How can Dogma change? 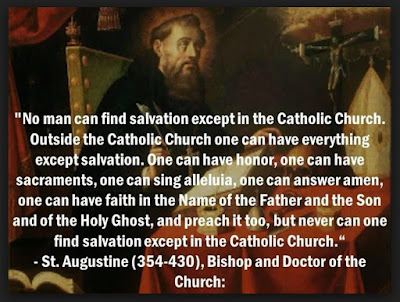 I've ignore this for years, but its come up in an interesting email discussion with a Catholic friend of mine and we would like some answers.

Can anyone help us out here?

"No salvation outside the Catholic Church"

“The Most Holy Roman Church firmly believes, professes and preaches that none of those existing outside the Catholic Church, not only pagans, also Jews, heretics, and schismatics can ever be partakers of eternal life, but that they are to go into the eternal fire ‘which was prepared for the devil and his angels’ (Mt. 25:41) unless before death they are joined with Her… No one, let his almsgiving be as great as it may, no one, even if he pour out his blood for the Name of Christ can be saved unless they abide within the bosom and unity of the Catholic Church.”  -Pope Eugene IV, ex cathedra, Council of Florence, Cantate Domino (1441 AD)

“The universal Church of the faithful is one outside of which none is saved.” -Pope Innocent III, ex cathedra, Fourth Lateran Council (1215 AD) 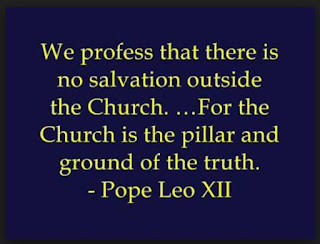 "Yes! There is salvation outside the Church!"

15. The Church recognizes that in many ways she is linked with those who, being baptized, are honored with the name of Christian, though they do not profess the faith in its entirety or do not preserve unity of communion with the successor of Peter. (14*) For there are many who honor Sacred Scripture, taking it as a norm of belief and a pattern of life, and who show a sincere zeal. They lovingly believe in God the Father Almighty and in Christ, the Son of God and Saviour. (15*) They are consecrated by baptism, in which they are united with Christ. They also recognize and accept other sacraments within their own Churches or ecclesiastical communities. Many of them rejoice in the episcopate, celebrate the Holy Eucharist and cultivate devotion toward the Virgin Mother of God.(16*) They also share with us in prayer and other spiritual benefits. Likewise we can say that in some real way they are joined with us in the Holy Spirit, for to them too He gives His gifts and graces whereby He is operative among them with His sanctifying power. Some indeed He has strengthened to the extent of the shedding of their blood. In all of Christ's disciples the Spirit arouses the desire to be peacefully united, in the manner determined by Christ, as one flock under one shepherd, and He prompts them to pursue this end. (17*) Mother Church never ceases to pray, hope and work that this may come about. She exhorts her children to purification and renewal so that the sign of Christ may shine more brightly over the face of the earth.

16. Finally, those who have not yet received the Gospel are related in various ways to the people of God.(18*) In the first place we must recall the people to whom the testament and the promises were given and from whom Christ was born according to the flesh.(125) On account of their fathers this people remains most dear to God, for God does not repent of the gifts He makes nor of the calls He issues.(126) But the plan of salvation also includes those who acknowledge the Creator. In the first place amongst these there are the Muslims, who, professing to hold the faith of Abraham, along with us adore the one and merciful God, who on the last day will judge mankind. Nor is God far distant from those who in shadows and images seek the unknown God, for it is He who gives to all men life and breath and all things,(127) and as Saviour wills that all men be saved.(128) Those also can attain to salvation who through no fault of their own do not know the Gospel of Christ or His Church, yet sincerely seek God and moved by grace strive by their deeds to do His will as it is known to them through the dictates of conscience.(19*) Nor does Divine Providence deny the helps necessary for salvation to those who, without blame on their part, have not yet arrived at an explicit knowledge of God and with His grace strive to live a good life. Whatever good or truth is found amongst them is looked upon by the Church as a preparation for the Gospel.(20*) She knows that it is given by Him who enlightens all men so that they may finally have life. But often men, deceived by the Evil One, have become vain in their reasonings and have exchanged the truth of God for a lie, serving the creature rather than the Creator.(129) Or some there are who, living and dying in this world without God, are exposed to final despair. Wherefore to promote the glory of God and procure the salvation of all of these, and mindful of the command of the Lord, "Preach the Gospel to every creature",(130) the Church fosters the missions with care and attention."

Did Vatican II change Dogma to say non-Catholics are saved by other faiths? Like the example of the Muslims mentioned?

What happened? The Catechism (below) seems clear that belief in Christ is necessary for salvation- but what sort of belief? The Muslims believe Jesus was just a good prophet? Is that enough for salvation now?

Is it the "We have the 'hope' all people will be saved" that Bishop Barron is always talking about?

Is it merely the ignorant who never knew about Jesus, but had they known they would have believed?

Or... has the Church completely changed centuries of Catholic Dogma?

161 Believing in Jesus Christ and in the One who sent him for our salvation is necessary for obtaining that salvation. 42 "Since "without faith it is impossible to please [God]" and to attain to the fellowship of his sons, therefore without faith no one has ever attained justification, nor will anyone obtain eternal life 'But he who endures to the end.'"]