Blow it out your ear Fr. Longenecker 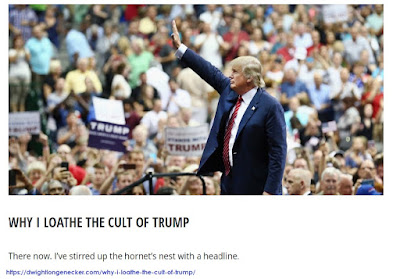 Today I am sounding off on Longenecker's political views because he just called me "loathsome" and basically stupid.


Longenecker: "...I don’t actually loathe Donald Trump I loathe the Trump Cult
This is the growing adulation for the man, and for that reason and the huge rallies disturb me.
I’m disturbed because I am whiffing the signs of demagoguery, and the problem with the demagogue is overweening pride."


Definition by Vocabulary.com: "Demagoguery is a manipulative approach — often associated with dictators and sleazy politicians — that appeals to the worst nature of people. Demagoguery isn't based on reason, issues, and doing the right thing; it's based on stirring up fear and hatred to control people. For example, a politician who stirs up a fear of immigrants to distract from other issues is using demagoguery. Demagoguery is one of the most negative aspects of politics, but it's also one that's all too common."

The "worst nature of people"?

Longenecker continues to make an ass of himself when he says it upsets him when politicians like Trump believe their ideas for fixing the country's problems are right.


What a dumb-ass thing to say!

Why would anyone support a politician who did NOT believe they had the right ideas for fixing problems?? Does that make sense to anyone besides Longenecker?

He ends his asinine article with...


"If you are an American Christian, don’t fall into the trap and jump on the Trump bandwagon. Vote on Tuesday with your eyes wide open. Vote for the best candidate according to your conscience and according to that person’s personal integrity, his or her policies and what you realistically believe they can accomplish to achieve the common good.
Prefer Donald Trump if you think he will do the best for the country, be grateful for the good decisions he has made…
…but when it comes to the cult of Donald–apply the brakes.
PS: If you are a Trump fan and this post has made you mad…don’t you think that might be a warning sign? Isn’t it a good thing to be wary of politicians and men of power? Isn’t it a wise thing for a priest to step back and warn about the allure of worldly power and advise caution?"


Let this proud "Cult of Trump" woman explain the facts to you- and to the majority who just don't understand WHY thousands of people flock to Trump rallies and support Trump, his policies and his at times outlandish speeches.

For decades, Republicans have been forced to vote for spineless, I'll-promise-you-the-world-do-nothing politicians. We put our hope into one after the other who promised to be strong against the left and fulfill campaign promises. They told us they were pro-life, they lied. They were actors, acting out a role they needed to get the part. Once they were nominated they ignored their base and did whatever the hell they wanted.

They were never truly in touch with voters, they just knew which buttons to push to get our votes and that we couldn't bring ourselves to ever vote for the other side. So we held our noses and voted or we just stayed home and wept. These politicians never cared about us, they only cared about our votes. We were numbers to them, not real people with real hopes, dreams and problems needing solving.

He was willing to fight for the things important to us, the Republican voters. He took down each and every fake actor out there one by one because he truly believes and thinks as we do- his base. He is one of us.

You just don't get that.

Maybe because you only see a millionaire bully who thrives on winning.

We see a political hero. A man who defies the odds and jumps into the battle even when the odds are against him because he believes in the fight. People laughed at him, called him a joke, homophobic, racist, white supremacist, etc. Yet he never wavered. We watched. He took it and fought back. That is what we were waiting for!

Trump is a man willing to take the abuse constantly tossed at him because he believes in what he is doing and he is listening to his base. He's a man with a backbone who will fight for what WE want. A man who never, not even for a moment, forgets who his base is. He is fighting for us, and the things WE believe in at tremendous personal cost to himself. We see his faults and we don't care because he is the only one fighting for us.

He's had his reputation shredded, he's been sued and is being sued over and over again. He has had to not only fight the Democrats, he even has to fight the establishment GOP-the swamp and RINO's. He's just like us! We, the Republican voters have had to fight the establishment ourselves for decades, but we could never win against such power. We were forced to either submit and vote for the GOP candidate we knew was a spineless worm or support a pro-butcher socialist loving Democrat. We had no one speaking for us, fighting for us. Until Trump. 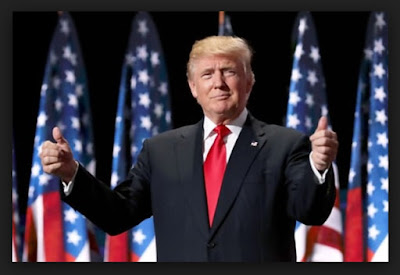 We don't care that he doesn't wear a halo, we didn't vote for him because we wanted a saint in office. We voted for him because we wanted a fighter in office willing to fight for us and our political platform because he sees what we see and he believes what we believe. The Republican Party LEFT the Republican voters years ago. Now Trump is taking it back and Republican voters are cheering to have our Party back from the spineless GOP swamp dwellers. This is what so many 'never-Trumpers' and establishment types just don't get. Trump hasn't destroyed the Republican Party...he's put it back together! 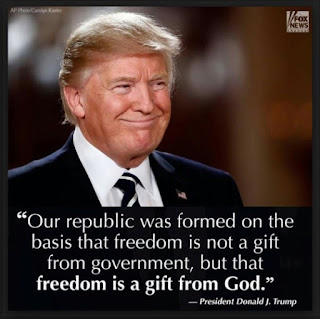 Christian voters did not forget that President Obama was a threat to religious freedom. Bakery shop's and flower shops and wedding photographers went out of business and were sued because they would not go against their religious beliefs and participate in gay "marriages". These people had their livelihoods destroyed and were harassed and smeared in the media for months and years. 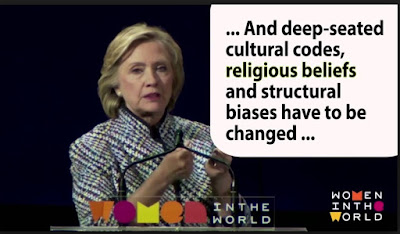 Christian's, Catholics and Protestants alike saw this, we knew this, we feared this and we knew we HAD to find a fighter who was willing to take on this battle for our religious freedom or we'd lose it. 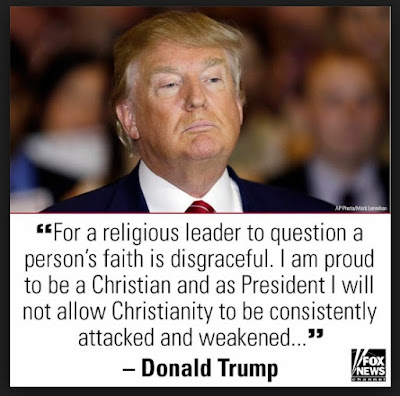 Others who were running in 2016 were more of the same - spineless- mostly RINO's -not to be trusted. We wanted someone we could trust, someone who believed what we believed.

President Donald Trump is that man and I thank God for him every day. And I believe, truly and honestly, that God had something to do with Trump winning the election.

Unfortunately we know it won't be as nice and secure as the lovely walls protecting Vatican City and Pope Francis from the unwanted... 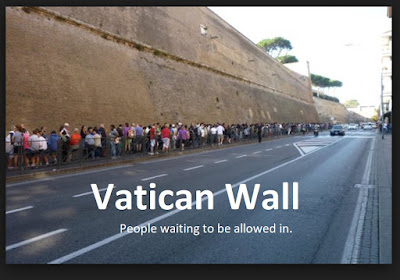 ...but it will one day sooner rather than later, be a wall that will help keep out illegals and drugs.

So you see Father Longenecker, we voters in the 'Cult of Trump' as you call it, will continue to support Trump and vote for him again in 2020 because he is one of us and he keeps his promises. With all due respect, if you don't like that, you can blow it out your ear.

**Full disclosure...I've had it out on this blog with Fr. Longenecker before for his bias, lying and deceit against Michael Voris.