The Muslims are coming

Sorry to interrupt Holy Week with this message, but... 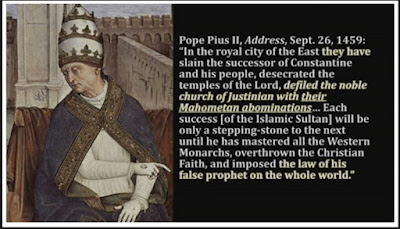 Nations need to WAKE UP!

Particularly nations that were once Christian and forsake their faith for secularism.

The Muslims are coming and they are happy to take what you've tossed aside and make it there own.

"A Muslim party in Belgium says it's preparing to campaign for setting up an Islamic state there. Two candidates from the newly-established Islam party won seats in a recent municipal election."

How will they get out from what they've allowed?

The Catholic Church had it right centuries ago...


Fifth Lateran Council 1512-17 A.D.
SESSION 12 - 16 March 1517
"We are suitably carrying out the duty of our office when we renew again that reform of the whole church and its affairs which we have accomplished with profit; when we plan to apply suitable remedies for the unchallenged observance of the reform and to make provision for cathedrals and metropolitan churches so that they may no longer be without their pastors; and when we supervise these remedies with ever-present attention and untiring efforts, by means of which we may be able to render the Lord's flock, which has been entrusted to our care, acceptable and submissive in the sight of the divine majesty. Our aim is also to crush the Turks and other infidels standing firm in the eastern and southern regions. They treat the way of true light and salvation with complete contempt and totally unyielding blindness; they attack the life-giving cross on which our Saviour willed to accept death so that by dying he might destroy death, and by the ineffable mystery of his most holy life he might restore life; and they make themselves hateful enemies of God and most bitter persecutors of the christian religion. Strengthened by defences not only spiritual but also temporal, we may be able, under God's guidance and favour, to oppose the bitter and frequent sallies by which, in wild rage, they move savagely amidst christian blood."


Europe has been flooded with Muslim immigrants and they are not assimilating into the European countries who have taken them in.


Catholic Catechism: 2241 The more prosperous nations are obliged, to the extent they are able, to welcome the foreigner in search of the security and the means of livelihood which he cannot find in his country of origin. Public authorities should see to it that the natural right is respected that places a guest under the protection of those who receive him.Political authorities, for the sake of the common good for which they are responsible, may make the exercise of the right to immigrate subject to various juridical conditions, especially with regard to the immigrants' duties toward their country of adoption. Immigrants are obliged to respect with gratitude the material and spiritual heritage of the country that receives them, to obey its laws and to assist in carrying civic burdens.


These immigrants are not "respecting with gratitude the material and spiritual heritage" of the nations taking them in.

No, they are working to change these nations into Muslim nations under Sharia Laws.

What is happening in Europe is happening in the United States too. Take a closer look at Muslims Ilhan Abdullahi Omar of Minnesota and Rashida Harbi Tlaib of Michigan and pay attention to what they are saying and doing because they've got their feet in the door and that is all it takes.

Quote: In her acceptance speech, delivered without an American flag, Congresswoman-elect Omar opened her speech in Arabic with the greeting, "As-Salam Alaikum, (peace be upon you), alhamdulillah (praise be to Allah), alhamdulillah, alhamdulillah."

Quote: "In Michigan, meanwhile, Rashida Tlaib, the daughter of Palestinian immigrants, won a largely uncontested race for the open seat in state's heavily Democratic 13th congressional district. In Tlaib's acceptance speech, delivered with a Palestinian flag, she credited her victory to the Palestinian cause. "A lot of my strength comes from being Palestinian," she said."

It's no secret that Muslims seek to spread Islam around the world. Some of them fight physical wars to gain ground, others work their way in politically.

The idiocy of the left in the U.S. cannot be underestimated. So many of our youth, our voting youth in particular are stupid. Plan and simple. They do not seem to know history at all. They can't see what is coming or the price that will be paid one day. Protestant and Catholic alike must oppose any and all foot holds by Muslims in this country or we will lose this country completely.

Look at Europe. If you think it can't happen here in the United States you are deceiving yourselves.

I weep for the care, love and beauty of our Holy Catholic Church in days gone by working so hard to protect Christianity and honor Our Lord.

[25]. "It is an insult to the holy name and a disgrace to the Christian faith that in certain parts of the world subject to Christian princes where Saracens[followers of Islam] live, sometimes apart, sometimes intermingled with Christians, the Saracen priests commonly called Zabazala, in their temples or mosques, in which the Saracens meet to adore the infidel Mahomet, loudly invoke and extol his name each day at certain hours from a high place, in the hearing of both Christians and Saracens and there make public declarations in his honour. There is a place, moreover, where once was buried a certain Saracen whom other Saracens venerate as a saint. A great number of Saracens flock there quite openly from far and near. This brings disrepute on our faith and gives great scandal to the faithful. These practices cannot be tolerated any further without displeasing the divine majesty. We therefore, with the sacred council's approval, strictly forbid such practices henceforth in Christian lands. We enjoin on catholic princes, one and all, who hold sovereignty over the said Saracens and in whose territory these practices occur, and we lay on them a pressing obligation under the divine judgment that, as true Catholics and zealous for the Christian faith, they give consideration to the disgrace heaped on both them and other Christians. They are to remove this offence altogether from their territories and take care that their subjects remove it, so that they may thereby attain the reward of eternal happiness. They are to forbid expressly the public invocation of the sacrilegious name of Mahomet. They shall also forbid anyone in their dominions to attempt in future the said pilgrimage or in any way give countenance to it. Those who presume to act otherwise are to be so chastised by the princes for their irreverence, that others may be deterred from such boldness."

Wake up Catholics, before its too late.