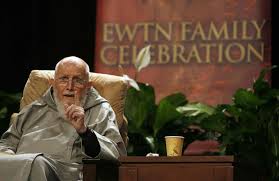 Fr. Benedict J. Groeschel, beloved priest and preacher, died on October 3, 2014, the vigil of the Feast of St. Francis, after complications with an ongoing illness. He was 81.
Fr. Benedict was a founder of the Community of Franciscan Friars of the Renewal (CFR), a reform community started in 1987 by eight Capuchin Friars based in New York City. A priest and psychologist, he was director of Trinity Retreat House in Larchmont, New York, and also taught Pastoral Psychology for many years at St. Joseph’s Seminary in Dunwoodie. Fr. Benedict was a popular writer, preacher, retreat master, and evangelist on Catholic television. His greatest joy was serving the poor and underprivileged.
Founder of St. Francis House and Good Counsel Homes, he also served as chaplain at Children’s Village in Dobbs Ferry for 14 years. Always deeply concerned with the welfare of others, he tirelessly provided food, clothing, and assistance to people in need—people he always considered his friends.
Father Benedict is survived by his sister, Marjule Drury, sister Robin Groeschel, brother Gary Groeschel, nine nieces and nephews, 115 CFR brothers and priests, and 31sisters who were inspired by his authentic witness to religious life and devotion to Jesus and His Church. He was preceded by his brothers Edward and Mark.
Wrote Fr. John Paul Ouellette, Community Servant, Franciscan Friars of the Renewal: “We are deeply saddened by the death of Fr. Benedict. He was an example to us all. His fidelity and service to the Church and commitment to our Franciscan way of life will have a tremendous impact for generations to come.”

Details for the wake and funeral will be forth coming.