Little over a week ago (June 26th), I posted THIS...about Twitter locking me out of my account for saying my governor made "me want to puke" for flying the sodomy flag over the Connecticut governor's Mansion here in my state to celebrate sodomy.

Moments ago, I sent THREE gay story tweets out on Twitter...the first was this...

...with the single word "Disgusting" (that is all I wrote- one word) in reference to a tweet about the American flag being flown with rainbow colors by our military in honor of sodomy. 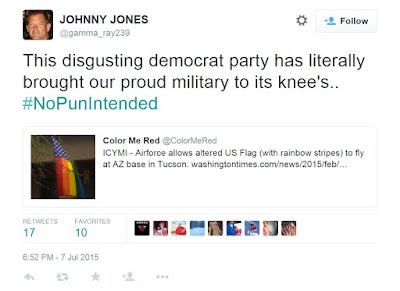 And the last two were an article from Christine Niles at Church Militant's website about two lesbians kissing on a Vatican website, see here:

Note, the only thing I added to these tweets was "WakeUp @Pontifex this is disgusting" and the hashtags #Catholic and #CatholicFollowChain -that's it.

Guess Catholics are no longer allowed to voice their objections to gay 'marriage' on Twitter.  I haven't seen that in the rules anywhere, but that isn't stopping Twitter from locking me out of my account- again.

In Christ & not shutting up, 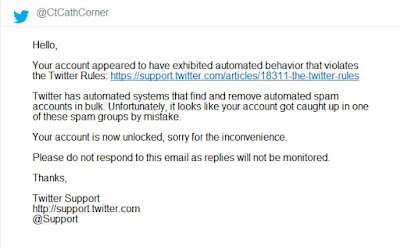 I do not for a moment believe this is over.  I assume that as soon as I tweet against gay "marriage" I will once more be reported and my account locked.
That will not stop me.  They can ban me every week if they want to...my message will be the same.