Interesting Vortex by Michael Voris over at Church Militant today.


Mr. Voris is clearly not happy with all that has happened at this Synod (no smart Catholic would be)- and from the time Pope Benedict resigned.  In today's Vortex, Mr. Voris goes after Pope Benedict for the damage he caused by resigning...

Quote: "The whole reason we are here in October of 2015 is because of what Pope Benedict did in February of 2013: He resigned, abdicated, abandoned the office of Pope — a monumental action, not yet fully recognized for the enormous earthquake it caused in the Church.
Forget for a moment all the rumors that it was done for blackmail or financial threats or whatever; we may never know. What’s important is he did it. He surrendered to whatever forces he thought he could not resist. The Holy Father abandoned his flock, and it was that single action that has brought all this about. Francis may have lit a fuse here, but Pope Benedict laid the dynamite. He has now set in motion a series of events that the Church may take decades, or even perhaps, God forbid, centuries to recover from without the much-longed for and prayed for direct heavenly intervention."

Voris also goes on to list all the progressive men Benedict elevated to Cardinal... 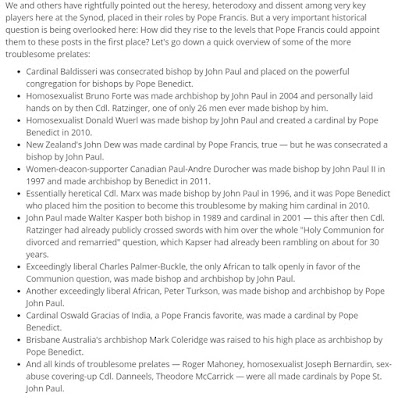 ...yet if you note, it was Saint Pope John Paul II who made ALL these men Bishops in the first place.

And recall, it was Saint John Paul II who kissed the koran, 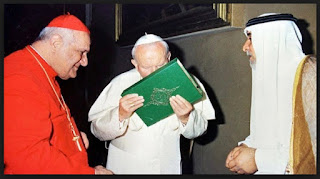 ...turned a blind eye to the sex abuse scandal when, then Cardinal Ratzinger, tried in the 1980's to get these corrupt abusive men out of the Church (as I wrote about HERE years ago)... 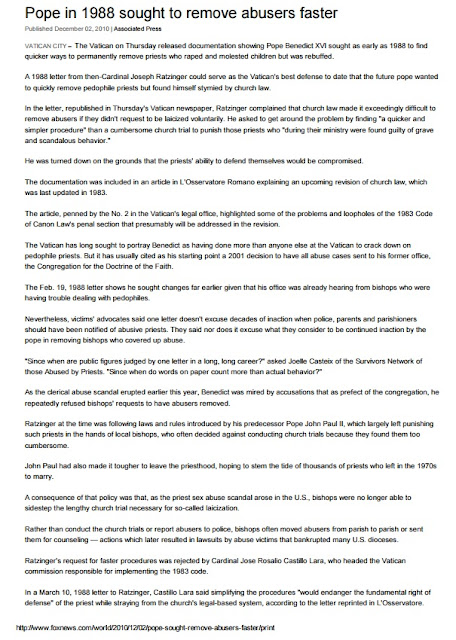 - it was Saint Paul John Paul who protected the pedophile priests for decades.

It was JPII who started World Youth Days with incredible abuses- namely passing our Lord around in Dixie cups, paper bags and just one person to another like it was not the Body, Blood, Soul and Divinity of God they were so callously handling. 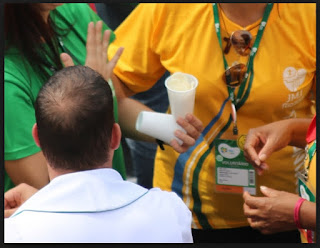 What has World Youth Day taught Catholic youth except to abuse our Lord and treat Holy Communion as if it were a Protestant communion of mere bread in "remembrance" only of the Lord?

My point here, is that I think Mr. Voris's anger over the disaster of this current Synod and general pontificate is misplaced.

If he wants to be angry about who did what in the history of our Church, I think Church Militant could make a much stronger case against Saint John Paul II than against Pope Benedict who did do much good for our Church in his own struggled attempts to turn back the evil tidal wave that was coming.  But prophecy doesn't say that the evil will be stopped by one pope alone...in fact prophecy has a lot to say about two popes living at the same time (read Bl. Anne Catherine Emmerich for more on this). Jesus hand picked Judas fully knowing that Judas would one day betray Him...prophecy was going to be fulfilled and Judas was the one to do it.

How do we know it wasn't God who told Benedict it was time to leave? To be clear I am not saying it was God, only making the case that we don't know that it wasn't God who told Benedict to step aside. Again, I say this in light of the dozens upon dozens of prophecies about "two popes" a "white pope and a black (probably Jesuit) pope" living at the same time. This prophecy (so far) seems to be true, and if it is, then a pope had to resign so that another could be named to fulfill prophecy- but did a pope decide on his own to step aside or is it God's will? That is what none of us knows.  Time will tell if the rest of it occurs.

For myself, while I hate that Pope Benedict resigned (I was devastated by it and felt betrayed by him), I will (for now) give him the benefit of the doubt because of prophecy.

And for now I place the most blame on Saint Pope John Paul II and our current Pope Francis.  Remember, JPII was adored by the world for kissing the koran and his "mercy" and "love" for all people just as Pope Francis is now adored by crowds of people who can't seem to contain themselves at the mere sight of Francis (JPII had the same effect on people- the "rock star" popes) - yet many of these same people swooning over the mere sight of the pope probably can't be bothered to attend Mass regularly or visit Christ in the Eucharist.

Recall, it was Pope Benedict who was hated, mocked and attacked by most of the world, especially the media for being too orthodox...that should tell you something.

Mr. Voris says Pope Benedict abandoned the flock...true only if it was Benedict's choice and not God's will for him to resign (and we may never know the answer to that).

It's my personal opinion, that Saint Pope John Paul II abandoned the flock decades earlier with what I see as a mostly failed papacy in regards to building up a faithful or faithless Catholic clergy and laity (does anyone believe Catholics were well taught the Faith during JPII's papacy?). Pope John Paul II retained the adoration of the clueless masses until his final breath. God rest his soul.

So who did more damage to the Church and the laity?  JPII for making all those progressive liberal men Bishops in the first place or Benedict for resigning? Time will tell, but at this point, I am leaning more towards JPII doing more damage than Benedict.