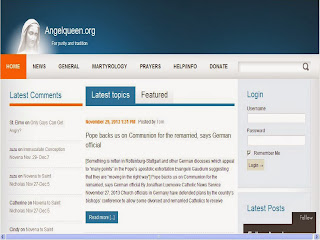 I don't know how many people visit the Plagiarist-Run-Wild website "Angelqueen.org", but I suggest staying FAR, FAR away from them.

This "Angelqueen.org: For Purity and Tradition" (*snort*) uses an image of a statue of Mary to make it look Catholic.  What the website looks like is [in my opinion] nothing but stolen work from other bloggers and media writers.  I've looked around and see a lot of reprinted articles- I HOPE they have permission from other bloggers/writers, but they do NOT have MY permission- and they've never asked for it either.

For MONTHS now a person going by the name "Tom" has been STEALING my blog articles and placing them on Angelqueen.org saying "written by Tom"- sometimes he includes a link back to my blog, but does NOT tell anyone he is STEALING WORD FOR WORD my ENTIRE articles.  The Angelqueen.org website rules do NOT state re-printing other peoples work without permission. [see rules below]

Again, he has NEVER asked permission to re-print ANY of my writings, but that doesn't stop him.

I have tried numerous times to get in touch with Angelqueen.org but they have NO option for contacting them directly OR filing a complaint that I can [so far] find on their website.  So I am left with voicing my disgust here on my blog hoping that readers and other bloggers will speak out if anyone at Angelqueen.org has done this to them.  I can SEE numerous other articles on there that seem to be set up like my own STOLEN work so I can only assume they are stealing from others to.

Under the websites "RULES" it says:


Here we play by BBGR or “Big Boy and Girls Rules.”You won’t find any long, detailed user agreements or posting guidelines to be referred to chapter and verse.If you are capable of logging on to this site and putting a coherent sentence together, you understand that you must avoid doing anything illegal, actionable (“tort”) or immoral. Further, this is a Catholic site frequented by Catholic faithful and clergy. Avoid engaging in anything that could be perceived as un-Catholic, anti-Catholic, non-Catholic etc.If you’re new, as with being the new guy anywhere else in life, it is wise to take some quiet time to get to know the environment, the people and particular “culture” before drawing too much attention to yourself.Conduct yourself as you do in real life – i.e. a well-mannered big boy/girl who is visiting with others for a discussion at a house, church, park and you’ll have no problems here whatsoever.Blessings.

Apparently they pay NO ATTENTION to rule breakers because the person stealing from me does NOT put ANY "sentences together" he steals them from other people and slaps his name on it. I'd say that not only is stealing/plagiarism but also "immoral"- which the website claims is not allowed.

Tom and those in charge at Angelqueen.org this is the LAST TIME I am telling you STOP STEALING MY WORK!  You DO NOT have permission to re-print ANYTHING from my blog anymore.  You want to comment on something comment HERE or share a LINK to my blog ONLY.  You can NOT STEAL my entire writings and try to pass them off as your own because you've CHANGED MY TITLES!

He has done it with my article entitled "Did Pope Francis say anything new in his Exhortation" - changing the title to: "Objection and Reply" where he first steals the ENTIRE article written by Damian Thompson at the UK's The Telegraph, then beneath that he places my article.

He has done this before and after a few days of trying to get in touch with the website and having no luck registering (I tried several times and all attempts failed) so that I could at the very least leave a comment to Tom on one of his pages, I gave up trying that avenue.  Instead I moved my copyright from the bottom of my blog to the top and that stopped him for all of about a month.

Now he is back to it taking my work without my permission and re-posting it.

How it shows up is he writes "posted by Connecticut Catholic Corner" and "written by Tom" then he re-prints WITHOUT my permission my entire blog articles. 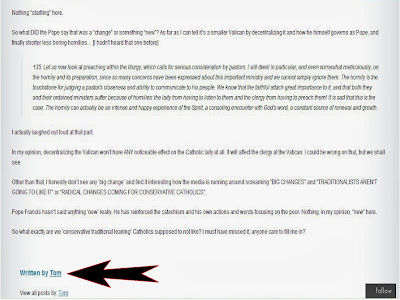 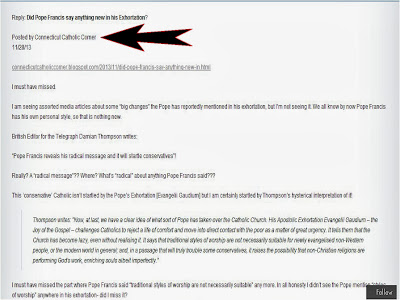 I certainly do NOT mind having a line or even a paragraph used with a link back to the entire original article, but Angelqueen.org does NOT do that- this website takes ENTIRE articles that other people write and slaps their own name on it making it look like they have written it. And they don't even send you an email asking to reprint your work!

If you've had issues with Angelqueen.org I'd like to hear about them.


UPDATE:
1)"Tom" over at Angelqueen.org has decided to mock and belittle me for not liking the fact that he is stealing from me.  No really, I am not kidding, see HERE.  He is attacking me for calling him out on his crimes.  Unbelievable, and remember folks this is titled as a "Catholic" website.

2) I found and contacted the Angelqueen.org website owner and filed a complaint with him.


In Christ and fed up with thieves,