Polish "Artist" gets naked and rubs against Crucifix

WARNING: This article isn’t for everyone- especially children.

“Art is the signature of man.” – G.K. Chesterton 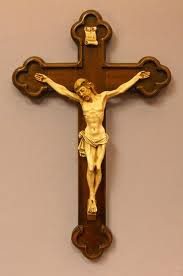 I was horrified by a recent “art” article to be delivered to my email.  I debated even mentioning it, but have decided I HAVE to, so that we can all PRAY to God for mercy, forgiveness and repentance on behalf of the truly sick and demonic people who are doing these terrible things.  While this story will no doubt sicken you, please pray for this “artist” and those like him.  He is truly in the clutches of the demonic.

Polish priest, Father Tadeusz Rydzyk has filed a complaint against the “Ministry of Culture” (in Poland) after discovering an “art exhibit” where “artist” Jacek Markiewicz gets naked and rubs his body against a crucifix and licks the body of Christ.

The “artist” attempts to defend his “art” by saying;  'When I entered the church in Warsaw, and I saw people praying to a God-like sculpture, I was shocked.'People were caressing the figure of Christ, touching his naked body, insulting him - and this struck me as a very bizarre way of worshiping God. So I created this film to show that in fact it is insulting to worship in such a way.'

He does an insulting sexual "art exhibit" film with a crucifix to show people their touching the crucifix was an "insult"?  The Polish politicians aren’t buying it.  They have come out clearly declaring the “art” is “a desecration”, “deplorable” and “insulting”.  One wonders how many politicians in the United States would do the same.  Would Pelosi or Biden?

MP Andrzej Jaworski from the right-wing Law and Justice party said: 'When I saw this I was completely disgusted.'That such a thing is happening in 21st Century Poland cannot be ignored.'I am insulted as a Catholic and clearly this so-called artist has a messed up sex life.'

I'd say he's got more than a "messed up sex life"!

What does the Art Gallery have to say about this "artist and his art"? Nothing much.

Curator of the gallery Piotr Rypson said: 'The museum directorate are not in the habit of commenting on exhibits.'We can only say that the artist’s works have been the subject of many essays, critical analyses and discussions over the last two decades.'

Subject of many essays?  So after all those "essays" and "analyses" and "discussions" they came to the conclusion this was the "art" they wanted?  What exactly does that say about ALL of them?

This vile blasphemy sadly reminded me we’ve seen this sort of obscenity before with the “artist” Andres Serrano and his “Piss-Christ”.  This “art” was a jar full of the “artists” urine along with a plastic crucifix.  Serrano was raised a "strict Catholic", according to Wiki -clearly something went very wrong.


“For this magnificent and imaginative effort, he received a $15,000 award from the National Endowment of the Arts (NEA).Urine tax dollars at work.His "work" was selected for the Awards in the Visual Arts program of the Southeastern Center for Contemporary Art of Winston-Salem, North Carolina for display and tour. This program, perhaps not coincidentally, is funded by The Rockefeller Foundation, which also heavily funds worldwide population control. This is an excellent example of how the population control cartel undermines the authority of those organizations (in this case, the Christian Church) who oppose their worldwide program of genocide.Outside of Satanism, no more direct attack on the Person of God has ever been launched, and yet even so-called 'Good Christians' squabbled over Sorrano's "rights of expression." Even Jesus physically attacked the moneychangers who desecrated only His Father's house not his very Person.Sorrano's "art" was displayed at the Los Angeles County Museum of Art, the Carnegie-Mellon University Art Gallery in Pittsburgh, the Virginia Museum of Fine Art in Richmond, and the Stux Gallery in New York.Sorrano's other works include "Piss God" and "Piss Pope." When asked what he would "work" with next, Sorrano replied "semen."He was as good as his word. The following year, he displayed a series of photographs entitled "Ejaculate Trajectory." These consisted of photos of his own semen jetting across a black background in abstract patterns.The National Endowment for the Arts had previously awarded Sorrano another $15,000 of tax money in 1985 for "Creating artworks composed from human body parts and decapitated heads of animals exhibited in glass vats.”


In 2008 Serrano changed his “medium” to feces- his own, other peoples and lots of animal feces.  He said God directed him to this “medium” and wanted him to produce his “Sh*t Show”. His feces “art” has sold for HUNDREDS of THOUSANDS of dollars.  No really, I'm not kidding.

These “artists” should be locked up in mental institutes, but instead they are creating “art” in which hundreds of people are spending hundreds of thousands (or more) to purchase.

What is wrong with society?  What does this say about us?  Why are people so clearly mentally disturbed allowed to go unchecked?  Does anyone else think they need mental help and LOTS of spiritual help?

I look at G.K. Chesterton’s words “Art is the signature of man” and wonder what he would say today about “artists” like Serrano and Markiewicz.  Are they truly our "signature" today?  What can be done to stop this?  Anything?

Sadly, I think this more than likely will not be the end of such stories.  The devil is hard at VILE work, so we must work HARDER to put a stop to his work.

Pity these people, pray for these people and pray hard for Father Rydzyk in Poland as he takes on this blasphemy to end any future such “art” exhibits in this gallery (and others).