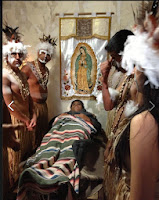 Irondale, AL – Anyone who has traveled to California is aware of the many glorious mission churches that dot the coastline – and of the fact that most of California’s major cities are named after saints. How did this happen?

Find out when EWTN airs an original five-part mini-series, “Serra: Ever Forward, Never Back.” Filmed on location in Spain, Mexico, and California, this beautiful docu-drama explores the life and heroic missionary activity of Blessed Junipero Serra. (Episodes 1 - 5 air 9:30 p.m. ET, Wednesday through Sunday, Nov. 20 - 24.  On Sunday, Nov. 24, in honor of the 300th anniversary of Serra’s birth, episodes 1-4 will re-air beginning at 7:30 pm ET and episode 5 will premiere at 9:30 pm ET).
Follow this amazing missionary from the moment of his birth on the island of Mallorca, Spain. Learn about the people who influenced him, his early religious life (which included a 200 mile walk from the port of Vera Cruz to Mexico City), his revival of the missions of the Pame Indians in the troubled Sierra Gorda region, and his efforts to construct five churches renowned for their art and architecture -- and that’s just in the first two episodes. 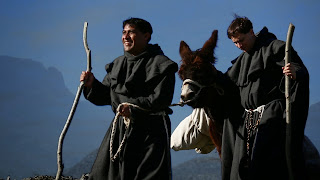 You’ll also learn about his call to bring the Gospel to Alta, California, and why so many people tried to talk him out of it! His expedition from Mexico to California was filled with trials and hardships, but Blessed Junipero Serra was determined to go “ever forward, never back.” He was attacked by Indians, watched his beloved page die in his arms, and told in no uncertain terms he had to return to Mexico. But Serra put his faith in God and decided to wait for a miracle. Learn what happens in EWTN’s original mini-series “Serra: Ever Forward, Never Back.”
In addition, just prior to the premiere of Episode 1, don’t miss a special “EWTN Live” when Host Fr. Mitch Pacwa will interview “Serra” Producer/Director Jim Kelty and Fr. Joseph Scerbo, S.A. an expert on the life of Blessed Junipero Serra and advisor to the mini-series. Airs 8 p.m. ET, Wednesday, Nov. 20.
EWTN Global Catholic Network, in its 32nd year, is available in over 230 million television households in more than 140 countries and territories. With its direct broadcast satellite television and radio services, AM & FM radio networks, worldwide short-wave radio station, Internet website www.ewtn.com, electronic and print news services, and publishing arm, EWTN is the largest religious media network in the world.
Posted by Connecticut Catholic Corner