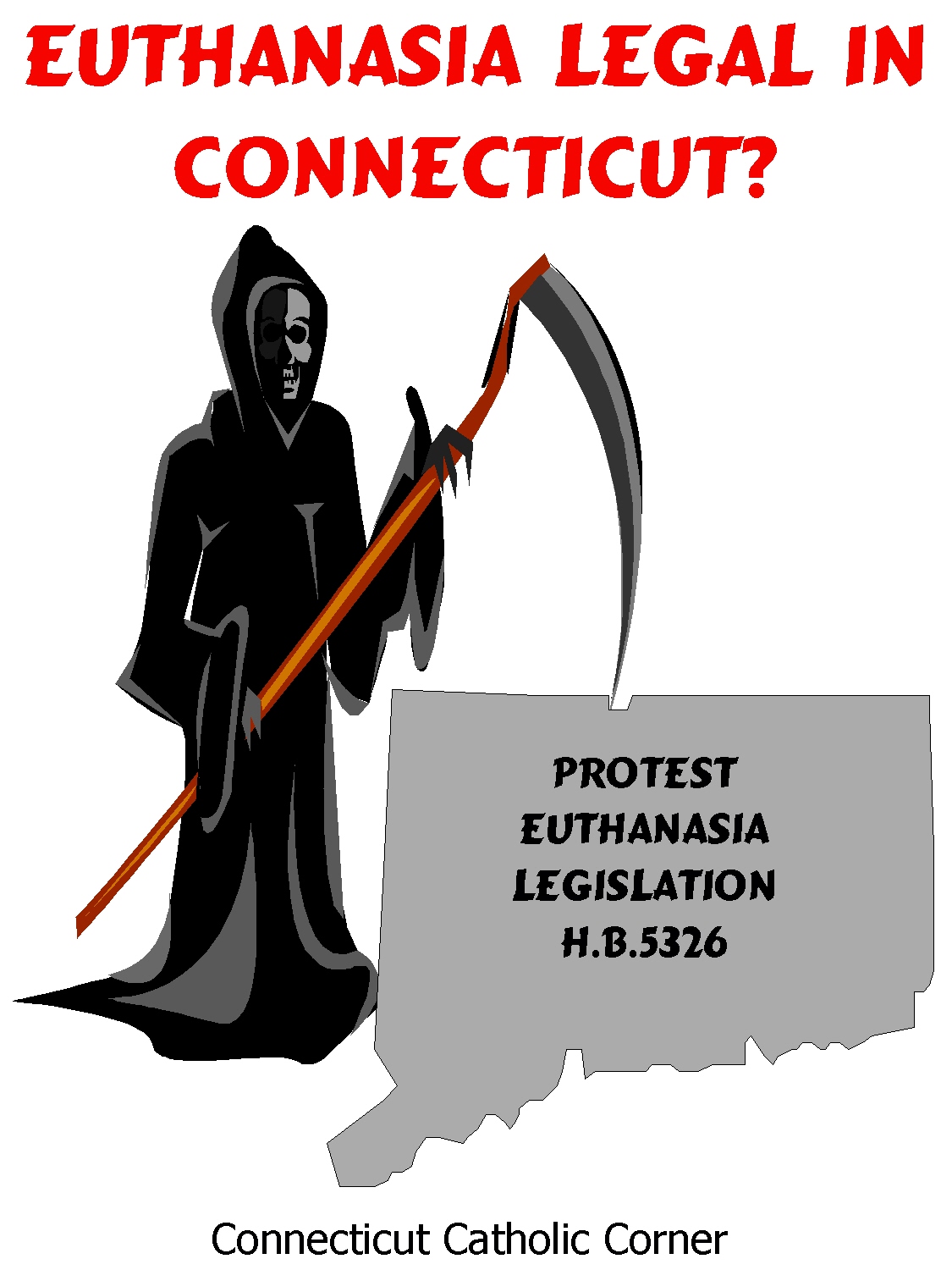 It's a sad day in Connecticut when our government is even contemplating euthanasia as an option for getting rid of "unwanted" terminally ill people.

H.B. 5326: To allow a physician to prescribe medication at the request of a mentally competent patient that has a terminal illness that such patient may self-administer to bring about his or her death.

The public hearing originally scheduled for tomorrow March 5th has been postponed for the 'Physician Assisted Suicide' (H.B. 5326) giving us a bit more time to protest this immoral legislation.

Catholics let your voices be heard!  Flood the Committee with emails, letters and phone calls telling our legislators we DO NOT SUPPORT EUTHANASIA!


The following statement was placed in my parish church bulletin this Sunday from the Connecticut Catholic Public Affairs Conference....

Please be advised that the Public Health Committee has delayed a public hearing on H.B. 5326 “An Act Concerning Compassionate Aid in Dying for Terminally Ill Patients” and it will not  be included as part of their public hearing on March 5th. The Committee has only two more public hearings scheduled (March 14, 2014 and March 19, 2014) prior to the Committee deadline of April 5, 2014.
It is imperative that members of our Legislative Network continue to contact the Committee members and express their opposition to this legislation.
The Bishops of Connecticut, along with members of the health care community and those representing the elderly and disabled, strongly oppose this legislation.  Most people facing a devastating illness are usually seeking true compassion, loving care, family support and quality pain control.  Instead of enacting a law that opens the door to potential abuse of the elderly, disabled and seriously ill, we as a society should work on refining and improving the existing system of palliative and hospice care for those facing a serious and life threatening illness.

Physician-assisted suicide does not promote compassion because its focus is not on eliminating suffering, but on eliminating the patient.  True compassion dedicates itself to meeting patients’ needs, both physically and emotionally, while respecting their value as a human being.  Compassion that is not rooted in respect for the value of human life will eventually find more and more people whose suffering is considered serious enough for assisted death, such as those with chronic illness and disabilities.
Click here to contact the members of the Public Health Committee by telephone or email. Please urge them to
vote “NO” on H.B. 5326.
If possible, attend the public hearing to show your opposition to this legislation.


Spend part of your Lent fighting for the life of others.  Tell Connecticut lawmakers you do NOT want this legislation to pass. There is no "compassion" it killing someone. Don't be fooled by the propaganda of those who wish to kill others legally in this state (or any other).