What is the United States trying to say to Pakistan? 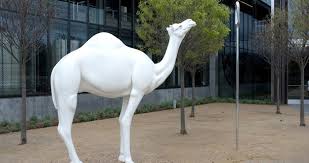 'Then Jesus said to his disciples, “Truly I tell you, it will be hard for a rich person to enter the kingdom of heaven. Again I tell you, it is easier for a camel to go through the eye of a needle than for someone who is rich to enter the kingdom of God.”  When the disciples heard this, they were greatly astounded and said, “Then who can be saved?” Matthew 19:23-25 (NRSVCE)

The United States Government has decided this is the message it wants to send to the people of Pakistan (who on average make less than $2,000.00 a year) in the form of ‘art’.  It's a giant white camel staring at the eye of a giant needle.  Christians who know their Bibles will instantly recall Jesus' words about the rich and the eye of a needle.

What will the people of Pakistan think?

What does this message say coming from the United States Government?

“Rich Americans are going to Hell, but you all should be fine!” ??

I personally, don't see the point in this particular 'art' being placed outside a U.S. Embassy.  Is there a point the government is trying to make here? Is it because of the camel?  Is the United States now deciding to send Biblical messages through art?

I am all for spreading Scriptural messages, I just get worried when I see the United States government take a stab at it.

At any rate, this message in art will cost U.S. tax payers $400,000 and will be displayed outside the new United States Embassy in Pakistan.

What do you all think?  Let me hear it.