Vatican takes a swipe at Michael Voris and other Catholics

In a stunning article written in Civiltà Cattolica, shared on Rorate Caeli, the Vatican takes a swipe at Michael Voris and Catholics in the United States for our politics and more. It's written by Fr. Antonio Spadaro SJ and Argentine Presbyterian Pastor Marcelo Figueroa, who are (according to Rorate Caeli) "two of the Pope's own closest confidantes".

I was stunned reading this article. I shouldn't have been, but I was. Here are a few of the things that I have to comment on.


Quote: "Appealing to the values of fundamentalism, a strange form of surprising ecumenism is developing between Evangelical fundamentalists and Catholic Integralists brought together by the same desire for religious influence in the political sphere.Some who profess themselves to be Catholic express themselves in ways that until recently were unknown in their tradition and using tones much closer to Evangelicals. They are defined as value voters as far as attracting electoral mass support is concerned. There is a well-defined world of ecumenical convergence between sectors that are paradoxically competitors when it comes to confessional belonging. This meeting over shared objectives happens around such themes as abortion, same-sex marriage, religious education in schools and other matters generally considered moral or tied to values. Both Evangelical and Catholic Integralists condemn traditional ecumenism and yet promote an ecumenism of conflict that unites them in the nostalgic dream of a theocratic type of state."

I have to stop the quote here because I question just what the authors mean by "Both Evangelical and Catholic Integralists condemn traditional ecumenism..."

Number one, if this wasn't so sad I'd be laughing my head off!

It's the Church that STOPPED real ecumenism...you know, converting people and bringing them into the Only Church Jesus Christ founded on earth. Now the Church just wants to "dialogue" with people and walk with them where ever it is they are wandering off to these days.

Pope Francis has made it perfectly clear he doesn't want to bring anyone into Christ's Holy Catholic Church, he wants to leave them right where they are, where ever that may be. That my friends is NOT ecumenical! 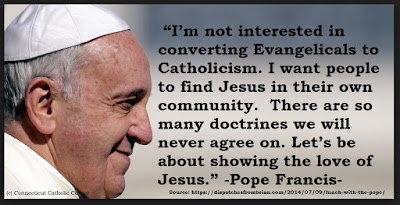 Number two, "Catholic Integralists"...really? The contempt oozing from the Vatican to authentic Catholics knows no limits.

Let's continue with Civiltà Cattolica's ("the journal considered the official voice of the Vatican") article depiction of American Catholics who still believe the faith...

Quote: "However, the most dangerous prospect for this strange ecumenism is attributable to its xenophobic and Islamophobic vision that wants walls and purifying deportations. The word “ecumenism” transforms into a paradox, into an “ecumenism of hate.” Intolerance is a celestial mark of purism. Reductionism is the exegetical methodology. Ultra-literalism is its hermeneutical key.Clearly there is an enormous difference between these concepts and the ecumenism employed by Pope Francis with various Christian bodies and other religious confessions. His is an ecumenism that moves under the urge of inclusion, peace, encounter and bridges. This presence of opposing ecumenisms – and their contrasting perceptions of the faith and visions of the world where religions have irreconcilable roles – is perhaps the least known and most dramatic aspect of the spread of Integralist fundamentalism. Here we can understand why the pontiff is so committed to working against “walls” and any kind of “war of religion.”

Let's take this one at a time.

-"...the most dangerous prospect for this strange ecumenism is attributable to its xenophobic and Islamophobic vision that wants walls and purifying deportations."

-"The word “ecumenism” transforms into a paradox, into an “ecumenism of hate.” - Suddenly the Catholics and evangelicals in the United States are "hateful" because we agree we need walls for protection against terrorists and we want stronger vetting policies so that we are allowing into our sovereign nation, people of good will, not heinous killers. That's rich coming from the Vatican sitting behind huge walls with armed guards stationed everywhere, while people line up outside the walls waiting for the Vatican's permission to let them in. Can we say hypocrisy? 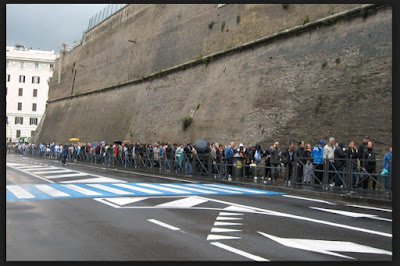 This is what the Swiss Guard carries to protect Vatican City & Pope Francis...(my post on this HERE). 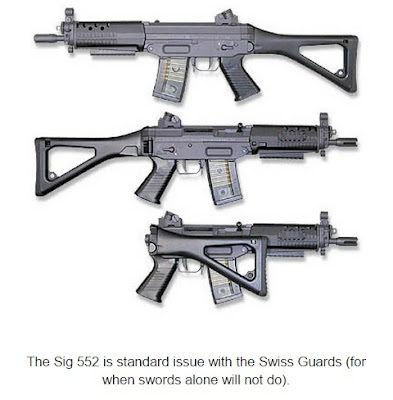 Let's move on to the Vatican's jab at Michael Voris and Church Militant.


Quote: "There is a shocking rhetoric used, for example, by the writers of Church Militant, a successful US-based digital platform that is openly in favor of a political ultraconservatism and uses Christian symbols to impose itself. This abuse is called “authentic Christianity.” And to show its own preferences, it has created a close analogy between Donald Trump and Emperor Constantine, and between Hilary Clinton and Diocletian. The American elections in this perspective were seen as a “spiritual war.”[3]This warlike and militant approach seems most attractive and evocative to a certain public, especially given that the victory of Constantine – it was presumed impossible for him to beat Maxentius and the Roman establishment – had to be attributed to a divine intervention: in hoc signo vinces.Church Militant asks if Trump’s victory can be attributed to the prayers of Americans. The response suggested is affirmative. The indirect missioning for President Trump is clear: he has to follow through on the consequences. This is a very direct message that then wants to condition the presidency by framing it as a divine election. In hoc signo vinces. Indeed."

The irony here is that Michael Voris and Church Militant have been staunchly solid in their defense of Pope Francis and their unwillingness to utter a word against him because he is a sitting pope. Other Catholic media from little blogs like my own, to much, much larger well known Catholic media like The Remnant and even EWTN's National Catholic Register and EWTN's own "The World Over" with Raymond Arroyo have spoke out in deep concern over many of the things Pope Francis has said and done, but not Church Militant. Voris has been very clear, they drew a line in the sand long ago to never publicly speak against a sitting pope, and so far they've kept to their word.

So here we have the Vatican taking a swipe at one of Pope Francis' staunchest defenders in the United States, it's insane really. I'll be interested in seeing how, or even if, Church Militant responds to this.

My response is Fr. Antonio Spadaro SJ and the Argentine Presbyterian Pastor Marcelo Figueroa don't know what the hell they are blathering about.

The whole thing began with people of faith dreading the pro-butchering of babies in the womb Hillary Clinton possibly becoming our next president. Cardinal Burke saw this and prompted Catholics to unite in a 54 day Novena to Our Lady to please help our nation to bring our citizens to holiness - this would not happen under Hillary Clinton A.K.A. "Killary".

This is the official endorsement of “Novena for Our Nation” by His Eminence, Cardinal Raymond Burke:


“There is no doubt that our beloved nation is in one of the worst crises which it has ever experienced, a profound moral crisis which generates division on all levels and results in an ever-greater more pervasive violence and killing. For Roman Catholics, who have always been known for their faith-filled patriotism, the first response to this crisis is fervent prayer and, in particular, prayer through the intercession of Our Lady of the Holy Rosary, Mary Immaculate who is also the patroness of our nation.
One of the most powerful prayers which is ours in the Church is, in fact, the Holy Rosary. I think, for instance, of the Battle of Lepanto and the victory which was won on October 7, 1571, over the Saracens who were bent on conquering Christian Europe. Let us now turn to the powerful prayer of the Holy Rosary, asking Mary Immaculate to intercede with Our Lord to bring healing to our nation and to inspire in her citizens the holiness of life which alone can transform our nation.
I wholeheartedly endorse the Novena for Our Nation (Starting August 15) and the Rosary Rally on October 7th next, the 445th anniversary of the Battle of Lepanto. I urge as many as are able to participate in these great spiritual works for the sake of our entire nation. In a special way, as the spiritual advisor to the Holy League, I urge all members of the Holy League to give strong leadership in this great campaign of prayer for our nation.”

That prayer was answered! Trump ran on a Pro-life platform while Hillary Clinton ran on a pro-death platform. Trump won and many Catholics, including myself place much of our thanks to Our Lady and the Novena we prayed for our nation.

What Fr. Antonio Spadaro SJ and the Argentine Presbyterian Pastor Marcelo Figueroa have written about Catholics and evangelicals in the United States is disgusting and highly insulting. Shame on them!

Please read the full article over at Rorate Caeli, link below.