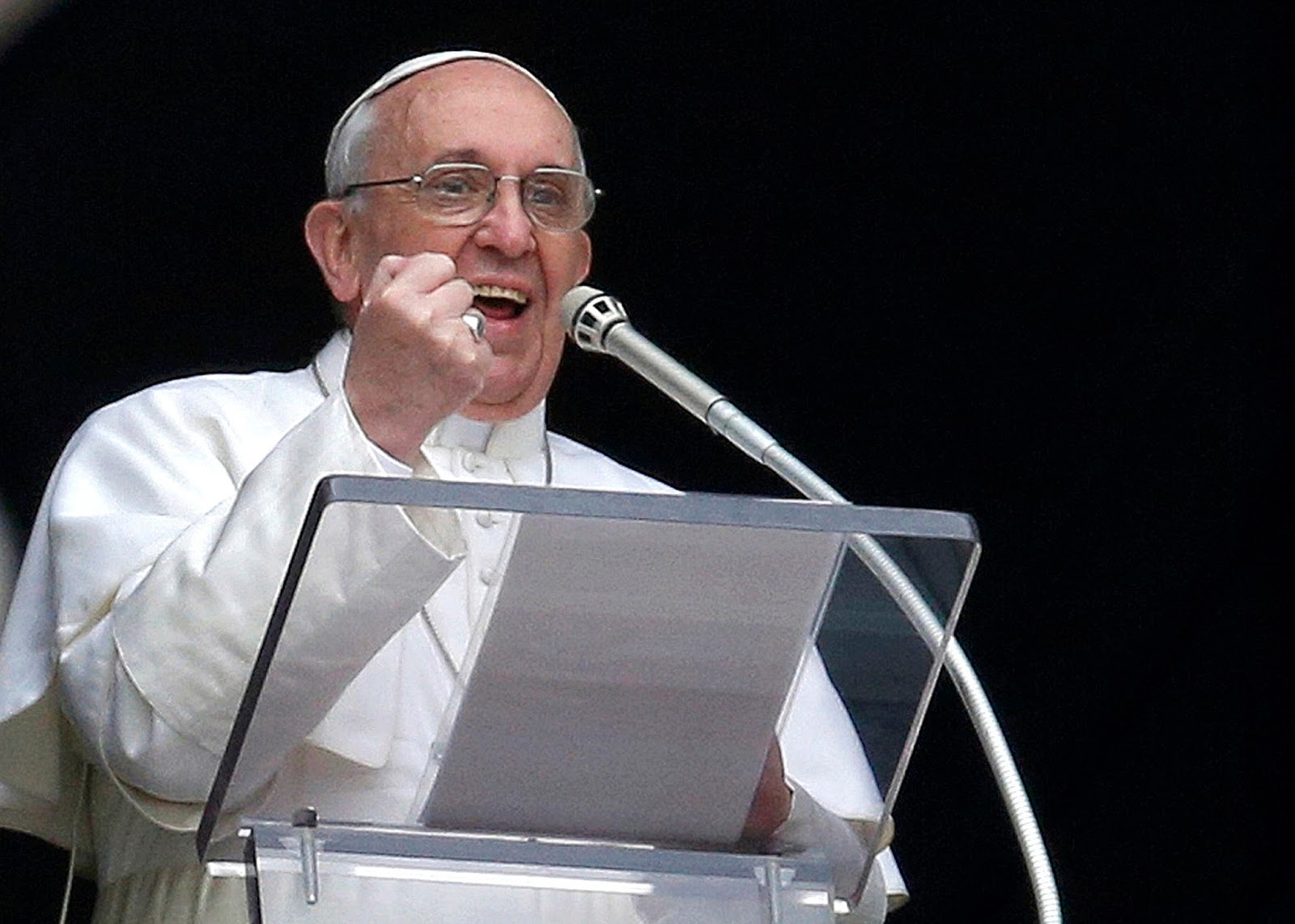 Since Pope Francis has joined the ‘conversation’ about the tens of thousands of illegal immigrant children flooding into the United States I am going to get political for a moment.  I am sure this will be extremely unpopular with most, but I really don’t care.  I’m fed up so I am going to rant.

The Pope says the ILLEGAL immigrants must be “welcomed and protected”.

Certainly we want them protected, but why would we ‘welcome’ uninvited ‘guests’ whom we can’t afford to care for, who bring sickness and disease, and who deplete our school systems and funds for the poor who are LEGALLY here?  This is an INVASION (as in UNWANTED), not an open border invitation to migration!

These are NOT 'refugees' no matter how much a bleeding heart liberal wants to spin it that way.

I am not totally insensitive to these children, it’s a sad situation, but the answer is NOT allowing tens of thousands of ILLEGAL immigrants to walk into the United States and stay here. We simply can not be an open border nation that allows anyone and everyone to simply walk over the border and live here.  We have laws.  If someone wants to come live here DO IT LEGALLY.

And I have to ask Pope Francis, 'just who are YOU to judge us'?

Perhaps the Holy Father will welcome them to Vatican City??

I think that is a grand idea!

Grab some petty cash from the Vatican Bank, send it to the United States and we will HAPPILY put them all on planes to the Vatican.

How about that Holy Father?  Will YOU "welcome and protect" them all in Vatican City?

Pope’s statement (translated by Google so there are errors):

Papal message on the occasion of

"Mexico Holy See colloquium on human migration and development "Mexico City, 14 July 2014  I would like to extend my greetings to the organizers, speakers, and Participants in the "Mexico Holy See colloquium on human migration and development." Globalization is a phenomenon that challenges us, especially in one of its principal manifestations which is emigration. It is one of the "signs" of this time that we live in and that brings us back to the words of Jesus, "Why do you not know how to interpret the present time?"(Lk 12,57). Despite the large influx of migrants present in all continents and in almost all countries, migration is still seen as an emergency, or as a sporadic and circumstantial fact, while instead it has now become a hallmark of our society and a challenge.
That it is a phenomenon carries with it great promise and many challenges. Many people suffer forced to emigrate, and often, die tragically; many of their rights are violated, they are obliged to separate from their families and, unfortunately, continue to be the subject of racist and xenophobic attitudes.Faced with this situation, I repeat what I have Affirmed in this year's Message for the World Day of Migrants and Refugees: " A change of attitude towards migrants and refugees is needed on the part of everyone, moving away from attitudes of defensiveness and fear, indifference and marginalization - all typical of a throwaway culture - based on attitudes towards cultures of encounter, the only culture capable of building a better, blackberries just and fraternal world."
I would also like to draw attention to the tens of thousands of children who migrate alone, unaccompanied, to escape poverty and violence: This is a category of migrants from Central America and Mexico itself who cross the border with the United States under extreme conditions and in pursuit of a hope that in most cases turns out to be vain. They are increasing day by day. This humanitarian emergency requires, as a first urgent measure, these children be welcomed and protected. These measures, however, will not be sufficient, unless they are accompanied by policies that inform people about the dangers of a journey longer available and, above all, promote 'that their development in countries of origin. Finally, this challenge demands the attention of the international community entire So that new forms of legal and secure migration may be adopted.I wish every success to the laudable initiative of the Mexican government's Ministry of Foreign Affairs in arranging a colloquium of study and reflection on the great challenge of migration and cordially impart my Apostolic Blessing to All Those present.” –end quote-

Since I am sure our Holy Father has no intention of caring for even a single illegal immigrant child or cranking open the Vatican Bank to help pay for them, I suggest the following…

1)  Send back ALL the children/teens/adults we can (that is, if we can find the families).
2)  Put the United States military on our borders (as should have happened after 9/11) and REFUSE access to illegal immigrants WITH THE EXCEPTION of human sex trafficking.
3) The children, who arrived with adults to care for them, send them to inner cities with abandoned houses.  The Federal government will have to cough up the funds to fix up these abandoned properties (they are crime dens when left abandoned anyway) and allow them to live there WHILE THEY WORK.  If they don’t find a job on their own, they can work cleaning the streets of the cities they want the right to live in.
4) ALL illegal immigrant children who REMAIN in the United States (through foster care or adoption or with a parent) MUST JOIN THE MILITARY AND SERVE FOR AT LEAST FOUR YEARS to EARN their “RIGHT” to be here when they turn 18 years old.  Refuse and you are deported on your 18th birthday.
5) They do NOT get the RIGHT to vote until AFTER they have served four years in the military- they must EARN it because they came here illegally.
6) If they refuse any of these terms, we DUMP THEM on the Mexican border and forbid them from EVER coming back or becoming residents of the United States of America. Period.

Too harsh?  I don’t think so.  These people are TAKING/STEALING from ALL legal United State’s citizens the moment they entered ILLEGALLY.  They are bringing sickness and disease that harm OUR legal citizens.  They want to be here illegally?  Let them pay and pay well for it so that others will soon know it is no vacation to enter the United States illegally.

And let’s be clear, these people are FLOODING our borders now, NOT to escape some sudden outbreak of violence, but rather because they heard a twisted version of Obama’s “DACA” policy to allow the children of illegal immigrants ALREADY LIVING HERE to stay and become citizens. The families of these children believe that Obama opened the borders to all kids and promised to make them U.S. citizens.  THAT is why they are flooding into this country now. So the Holy Father's statement about people being "forced to migrate" is WRONG and has ZERO to do with the reason illegals are coming into the United States right now.

The 10-page July 7 report was issued by the El Paso Intelligence Center (EPIC), which according to the Justice Department website is led by the DEA and incorporates Homeland Security. Its focus is on the collection and distribution of tactical intelligence, information which can immediately be acted on by law enforcement.

"Of the 230 migrants interviewed, 219 cited the primary reason for migrating to the United States was the perception of U.S. immigration laws granting free passes or permisos to UAC (unaccompanied children) and adult females OTMs (other than Mexicans) traveling with minors,” the report said.

Pray for this nation and for the illegal immigrants- pray that they go home and are welcomed and protected in their own homeland.  Pray that LEGAL immigrants always find the United States of America welcoming and protecting of them and THEIR RIGHT to be here- they earned it legally.

I've got nothing else to say on this matter.