Lately, Fr. Barron has been busy on Youtube leaving assorted distortions and confusing replies to the comments on his "we have a reasonable hope all people are saved" video, where two days ago he reasserted his 'hope' for universal salvation...

My focus is not on his video...but rather his replies (both new and old) to people who are confused by his statements that often conflict with the Church, the Bible and the writings of the Saints and Doctors of the Church.

When people asked him about Ananias and Sapphira being saved or damned (Bible: Acts 5)...

Ananias and Sapphira5 "But a man named Ananias, with the consent of his wife Sapphira, sold a piece of property; 2 with his wife’s knowledge, he kept back some of the proceeds, and brought only a part and laid it at the apostles’ feet. 3 “Ananias,” Peter asked, “why has Satan filled your heart to lie to the Holy Spirit and to keep back part of the proceeds of the land? 4 While it remained unsold, did it not remain your own? And after it was sold, were not the proceeds at your disposal? How is it that you have contrived this deed in your heart? You did not lie to us but to God!” 5 Now when Ananias heard these words, he fell down and died. And great fear seized all who heard of it. 6 The young men came and wrapped up his body, then carried him out and buried him.7 After an interval of about three hours his wife came in, not knowing what had happened. 8 Peter said to her, “Tell me whether you and your husband sold the land for such and such a price.” And she said, “Yes, that was the price.” 9 Then Peter said to her, “How is it that you have agreed together to put the Spirit of the Lord to the test? Look, the feet of those who have buried your husband are at the door, and they will carry you out.” 10 Immediately she fell down at his feet and died. When the young men came in they found her dead, so they carried her out and buried her beside her husband. 11 And great fear seized the whole church and all who heard of these things."

...Barron ignored them and did not respond.  I thought it was a good question and I would have liked seeing Barron's response.

So it's really no great wonder why the people leaving comments on Barron's Youtube Channel are so confused.  Barron has stirred up valid questions and they aren't getting valid answers.

In the following comments we see exactly why Bishop-elect "hopes" all will be saved...he wonders if any human ever dies in a state of mortal sin:

How do we know anyone actually dies in mortal sin??  Really?

Looking around the world today, Fr. Barron questions whether or not people die in a state of mortal sin?  This stuns me.

Oh well, that explains it!

I have no idea what Bishop-elect Barron is saying here (above).  Is he saying because Christ calls 'us all' that 'all' will answer and be saved? He seems very focused on the word "all", while completely forgetting Sacred Scripture of Christ separating the sheep from the goats (Matthew 25).

Barron goes on with his "all" fascination:

I think I'm having a Clinton flash-back 'what is the meaning of is'!

Notice below that Fr. Barron poo-poos Church approved apparitions on revelation about hell, but he fully supports Dante's Divine Comedy (the "single tear") as a reliable source for information on hell and salvation. 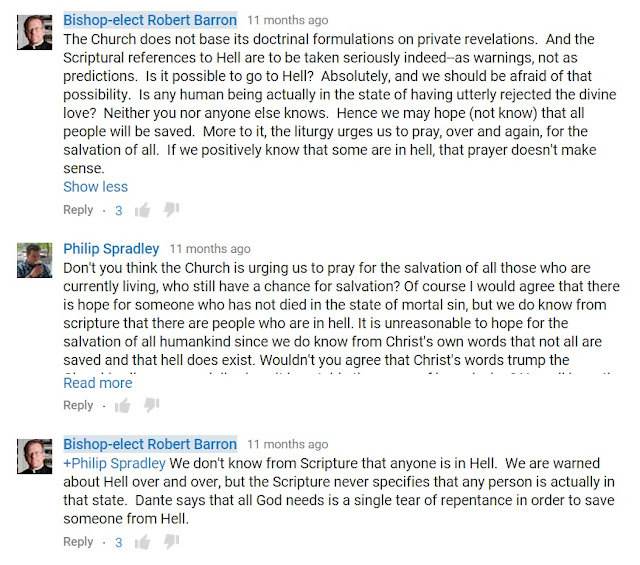 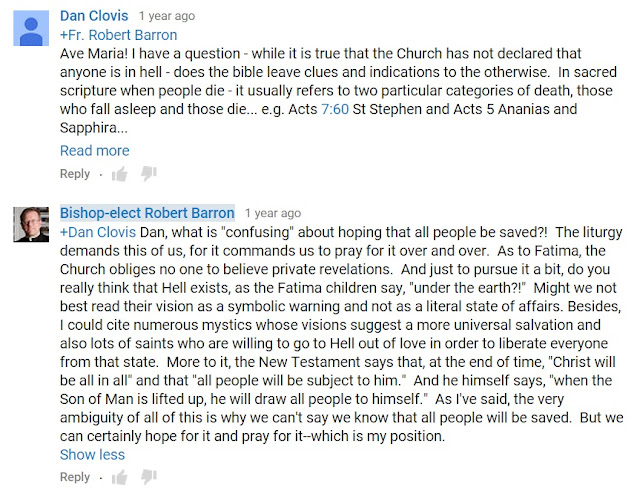 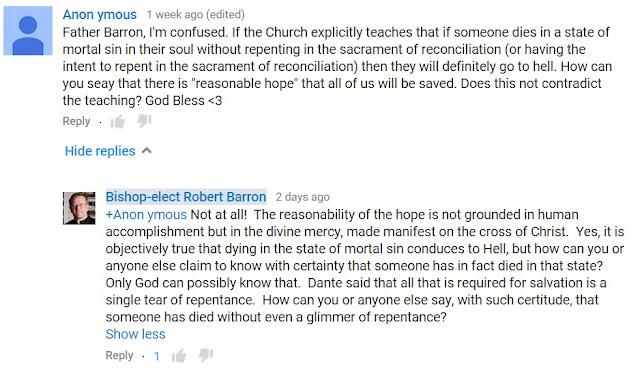 And again he REALLY likes Dante:

Nothing against Dante...but I would take Sacred Scripture, the visions of hell and warnings of Our Lady of Fatima over Dante's Divine Comedy as a resource on Hell and the very real fact that people will spend eternity there.

One more thing... Barron isn't too fond of Church Militant's Michael Voris for pointing all this out over the years. ;) 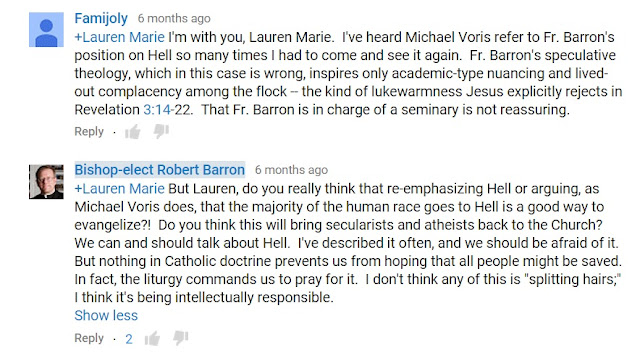 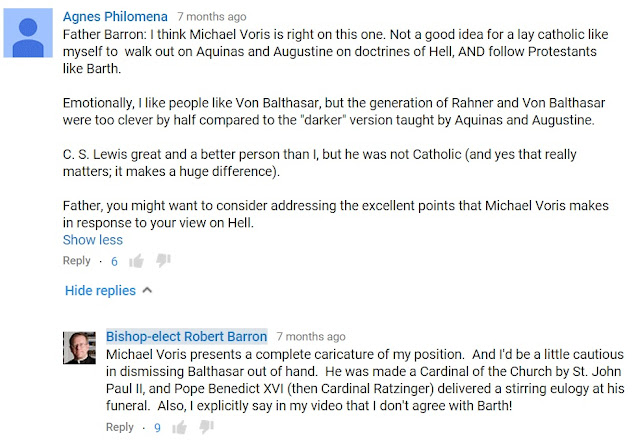 Barron thinks Voris is a "bully" and says he won't respond to him...

...yet Barron says he DID respond to Voris...

In Christ and wondering what in Hell Bishop-elect Fr. Barron is talking about,