...I just don't know where that decency line actually is.


I noticed Erick Erickson was trending on Twitter and decided to see why.

I was shocked at what I found.

Seems he's quickly run out of Trump love, though I am not sure I really understand considering Erickson's favorable tweets about Trump during the Fox News GOP debate on Thursday night. 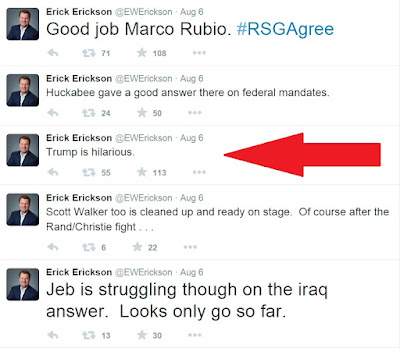 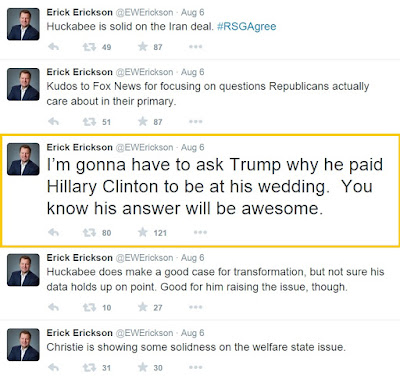 Notice that all of these tweets are well into the debate... long after Megyn Kelly started the debate with a list of insults Trump has tossed out at women over the years (Trump claimed it was only directed at Rosie O'Donnell).  *Erickson's opinion of Trump never wavered over the insults directed at assorted women from Trump.  Erickson even tweeted that Trump was "hilarious".

*This is my confusion.

Now today, Erickson has dis-invited Trump to his RedState Gathering... 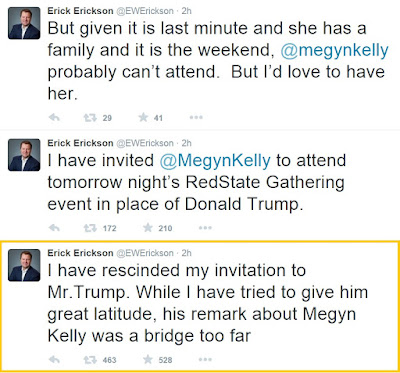 ...because Trump's remark about Megyn Kelly was a  bridge too far?

What remark?  I looked around the Internet first finding an article by the Washington Post that saw insults everywhere from Trump against Kelly.

Here are some supposed terrible, horrible, unforgivable insults from Trump about Megyn Kelly according to the Washington Post... 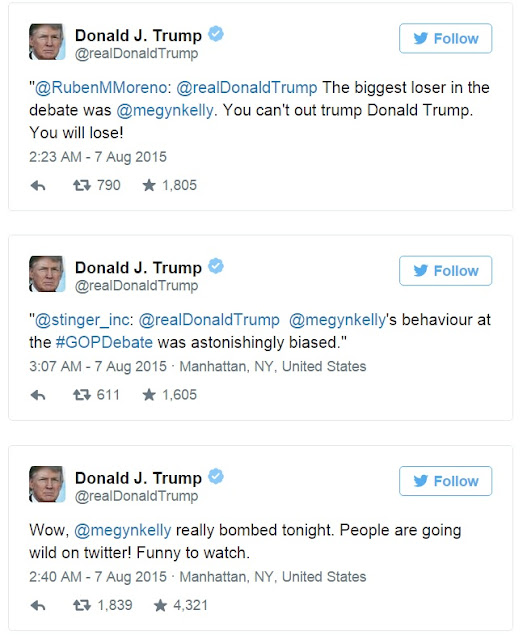 Now, I don't see an insult in saying he believed Megyn Kelly's "behaviour at the #GOPDebate was astonishingly biased"...or that he believed Kelly "bombed" (I think she did too) or that he thinks she was the "biggest loser" coming out of the debate (I said the same thing the night of the debate- hours before Trump did).

But apparently those tweets weren't the ones that changed Erickson's mind about having Trump attend his RedState Gathering.  It was a comment made by Trump on CNN.

"He [Trump] is not a professional politician and is known for being a blunt talker. He connects with so much of the anger in the Republican base and is not afraid to be outspoken on a lot of issues. But there are even lines blunt talkers and unprofessional politicians should not cross.Decency is one of those lines.As much as I do personally like Donald Trump, his comment about Megyn Kelly on CNN is a bridge too far for me.In a CNN interview, Mr. Trump said of Megyn Kelly, “You could see there was blood coming out of her eyes. Blood coming out of her wherever.”It was not the “blood coming out of her eyes” part that was the problem."

Ok. I am good with a person drawing a line in the sand and saying "Decency is one of those lines" you don't cross.  My problem is Erickson didn't care when the insults were directed at other women.  He only took exception when the (crude) insult was directed at Megyn Kelly.  What's with that?  Some women are OK to insult and others aren't?

Is it because the insult said on CNN by Trump mentioned "blood"?  Was that the line of "decency" not to be crossed while calling other women "fat pigs, dogs, disgusting animals and slobs" is perfectly fine with Erickson? "Hilarious" even?

Was Trump making a crude reference to Kelly possibly suffering a bout of PMS?  I really have no idea, and its not the point.

I am no Rosie O'Donnell fan, but why was it OK with Erickson when Trump was insulting O'Donnell and other women calling them slobs, pigs etc, but suddenly there is a "line of decency" you don't cross when an insult is tossed at Megyn Kelly?

That's the part I don't get.