'There is not in the whole world a monster to be compared with a priest in the state of sin, for the unfortunate man will not bear with correction.'

The post I am talking about today is entitled “St. Catherine of Siena warns Michael Voris and the Catholic Blogosphere”.  The blogger completely twists the meaning of words, scripture and our Catholic faith to attempt some sort of attack or correction of Michael Voris and other Catholic bloggers (that would include me because I do the same things as you'll see in the links to my own past posts on this issue) for reporting on priests in the Church who reject the Faith and teach heresy.

This blogger firmly believes Catholics are not allowed (by fear of God) to point out evil within the clergy(more on that later).  But first the blogger wrongly accuses Voris of "manipulating" viewers because he shows videos of Catholic clergy and Catholics behaving in ways that are not Catholic [supporting and/or marching in gay pride parades].  The misuse of the word "manipulate" is only the beginning...read on and see for yourselves. 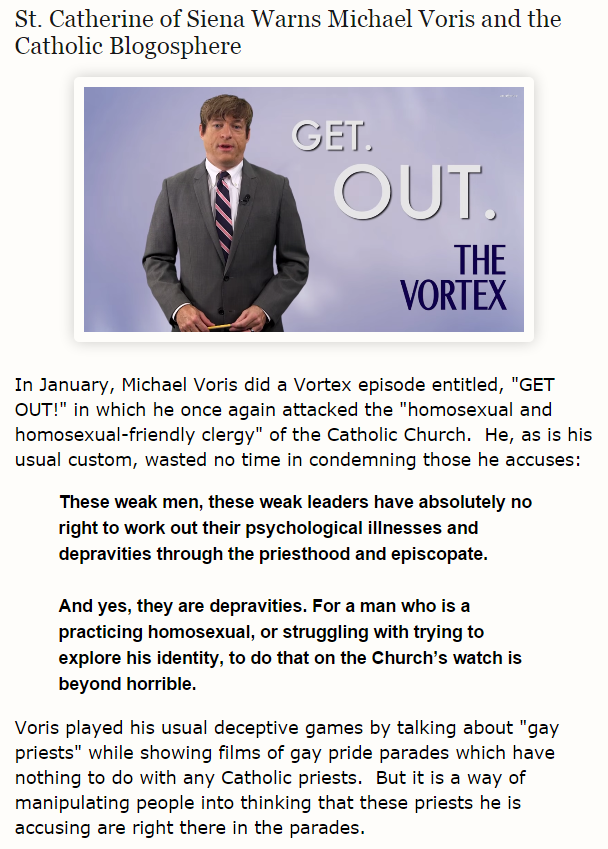 Of course this is wrong -and I said so in my comments left on the blog(see below).

Catholic clergy ARE participating in gay parades - I've done posts on it with photos of the priests AT the gay pride parades (see photo below): 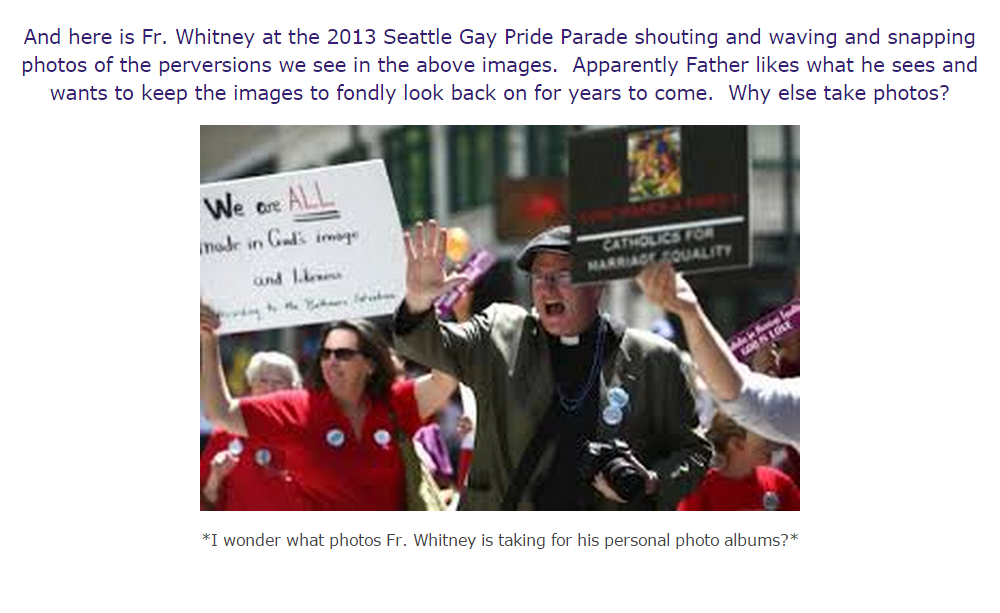 And this has been going on for DECADES in the Church... 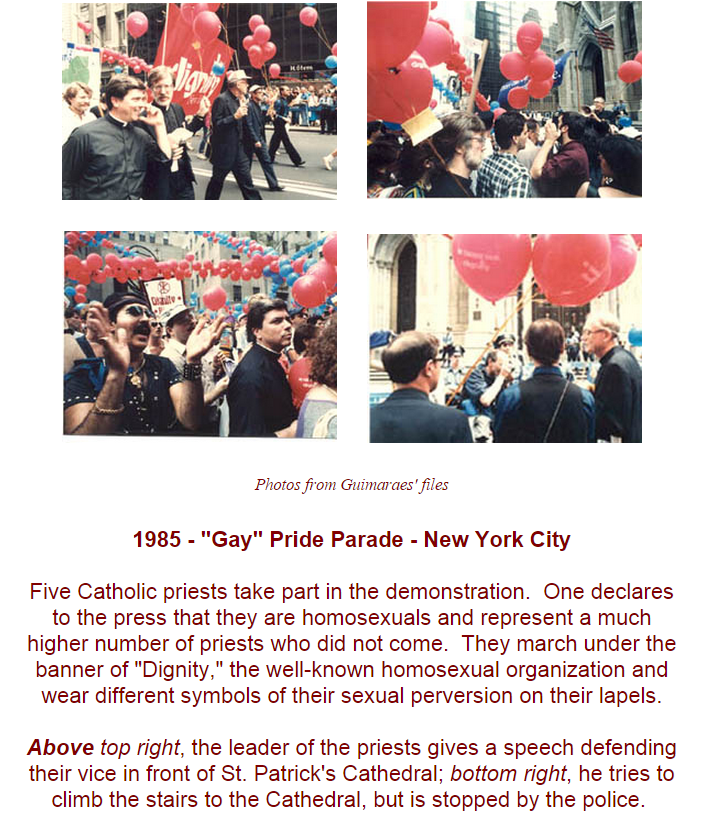 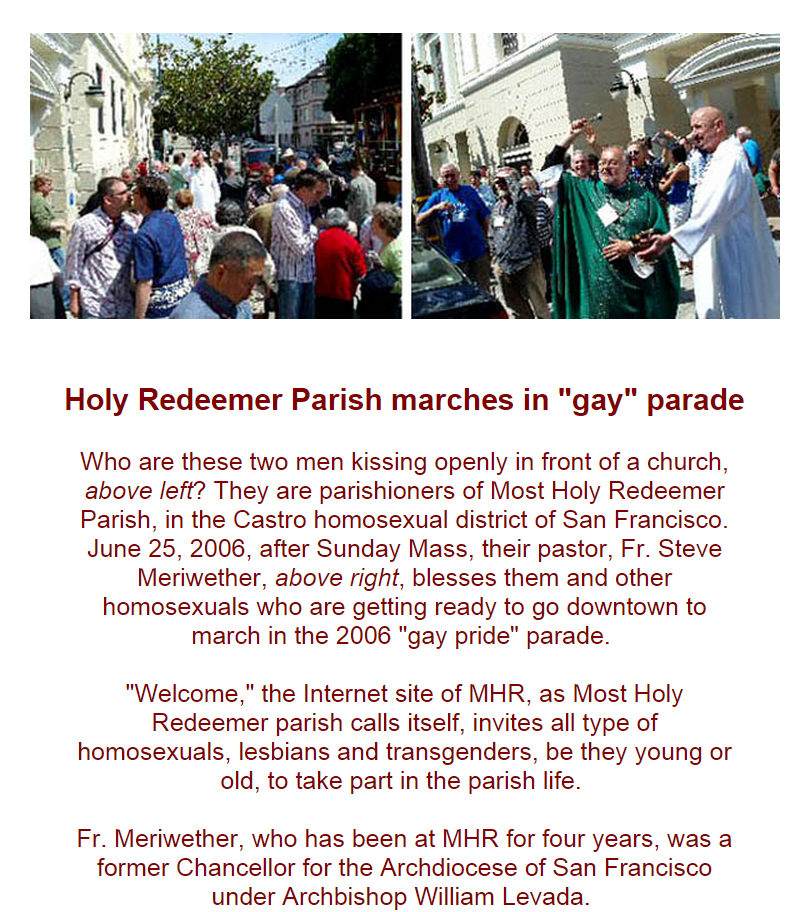 The only "manipulating" going on here is done by the Catholic in Brooklyn blogger who seems determined to attack Voris and other bloggers for reporting on Catholic clergy who are promoting MORTAL SIN.  As I mentioned at the beginning of this post, this is not the first time Catholic in Brooklyn has taken shots at Voris and others who report on this issue. There is a clear and distinct bias from this blogger against any Catholics who point out heresy or other evils done by Catholic clergy.

The "Catholic in Brooklyn" blogger goes on to butcher the meaning of "persecute" to mean Catholics aren't allowed to condemn evil done by clergy because...God says so.  If one looks at how "persecute" is used by the Catholic Church in our catechism it is clear those being persecuted are KEEPING the Faith, not those rejecting the faith.  More: here.

See how "Catholic in Brooklyn" distorts the word and God himself to justify his/her personal beliefs and manipulating people into thinking he/she is making some sort of point.  They aren't and don't. 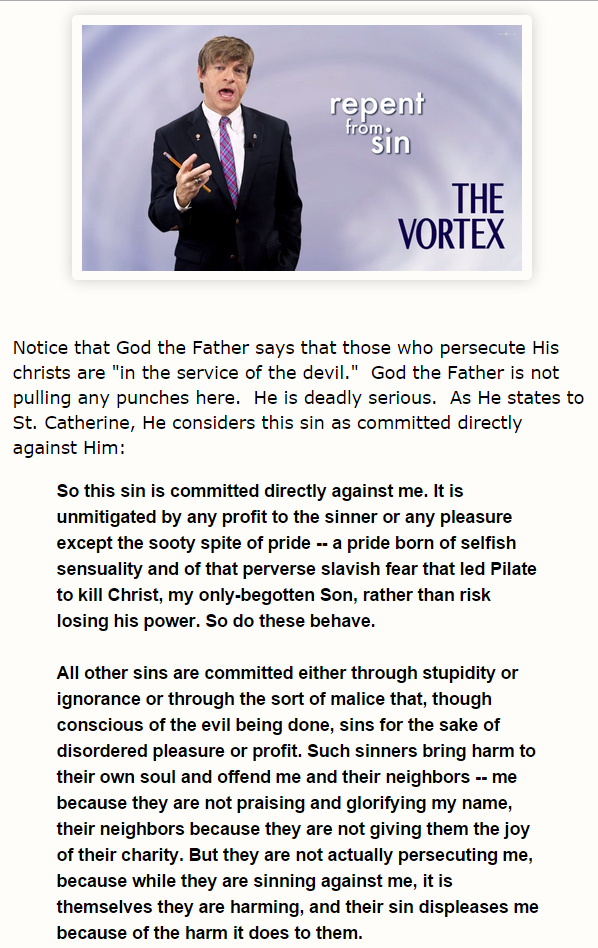 To manipulate the word "persecute" in such a way is shameful and entirely wrong. Christ's priests are those doing God's Will, not heretics.  You'd think the Catholic Church its self must have "persecuted" old heretic Martin Luther when he was a priest in the Church by this blogger's twisting of quotes and definitions!

Apparently this blogger also believes Catholics are not allowed to speak against any evil done by clergy- that we must keep silent and allow the evil to go on.  I wonder if this applies to child molesting priests in the Church too?  Should we keep our silence about them?

If we take this particular Catholic blogger’s twisted personal interpretation of St. Catherine’s quote then we MUST keep silent and not expose sexual predators in our clergy.

Of course that is ridiculous and disgusting!

So is keeping silent about heretics in the Church who are leading people to HELL.

To keep silent is to ALLOW the evil to continue and spread.

The blogger over at "Catholic in Brooklyn" is 100% wrong in ALL he/she has written in this post.

We ARE our brother’s keepers and it is not just our right to speak out against evil-even in the clergy- it is our DUTY.  Saints in our Church's history have called out priests who do evil and they have not been "persecuting" God as this Brooklyn blogger seems to think.

That all said, here is my comment I left on the Catholic in Brooklyn blog:

Connecticut Catholic Corner February 9, 2015 at 9:18 AM "If the faith is in imminent peril, prelates ought to be accused by their subjects, even in public." -St. Thomas Aquinas

You're wrong about priests and gay parades. Catholic clergy are continually leading people into Hell over the issue of homosexual sins (gay sexual relationships).

I could go on as Voris has because the examples go on and on and on.

Heretics in the clergy are leading people to HELL and that is something EVERY Catholic should worry about and attempt to stop.

"The greatest obstacle in the apostolate of the Church is the timidity or rather the cowardice of the faithful."-Pope St. Pius X

“If one yields ground on any single point of Catholic doctrine, one will later have to yield later in another, and again in another, and so on until such surrenders come to be something normal and acceptable. And when one gets used to rejecting dogma bit by bit, the final result will be the repudiation of it altogether.” - and - “What shall a Catholic do if some portion of the Church detaches itself from communion of the universal Faith? What other choice can he make if some new contagion attempts to poison, no longer a small part of the Church, but the whole Church at once, then his great concern will be to attach himself to antiquity (Tradition) which can no longer be led astray by any lying novelty.”  quotes from St. Vincent of Lerin

And of course Canon Law is on Voris' side too:

I don't know why the "Catholic in Brooklyn" blogger insists on redefining words, manipulating quotes from Saints and "shooting the messenger"(Voris).

Voris is not creating the problem in the Church, he's exposing it and wanting it cleaned up.

The "Catholic in Brooklyn" blogger seems to prefer pointing fingers are Voris and other Catholic bloggers rather than the offenders themselves.  Strange way to live out our Catholic faith which requires us to expose evil, not cover it up- even if its Catholic clergy doing the evil.

"If the faith is in imminent peril, prelates ought to be accused by their subjects, even in public." 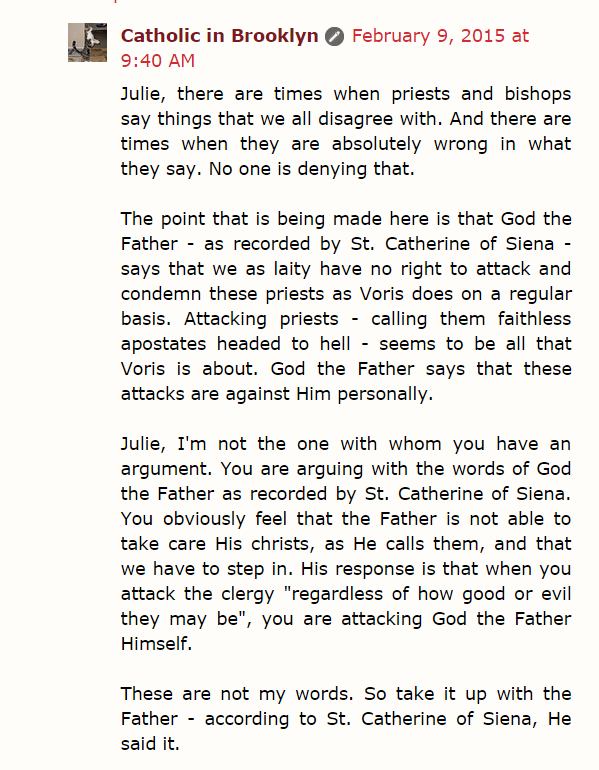 You may well have good intentions Catholic in Brooklyn, but you are manipulating and warping everything because of your personal biases.  If you believe what you just said to me, you MUST believe it is wrong to condemn priests who sexually abuse children and that the Church was in error to condemn Martin Luther for all he did.

Sorry "Catholic in Brooklyn" but you are dead wrong because they are your words that have twisted, redefined and manipulated Church teachings and quotes.

And because it isn't in my nature to simply shut up about such errors, this Catholic blogger isn't going to be silent.  God will indeed be my Judge and I am good with that.

May the peace of the Lord be with you.