The Catholic Bishops Conference of the Philippines has voiced its support for an “anti-discrimination” law to not treat lesbian, gay, bisexual and transgender people as “second-class” citizens.  But what “rights” exactly are the Bishops supporting for LGBT people so they no longer feel like they are being treated as second class citizens?

Tell me I'm wrong, but it looks to me that the CBCP is supporting gay rights in a roundabout way... 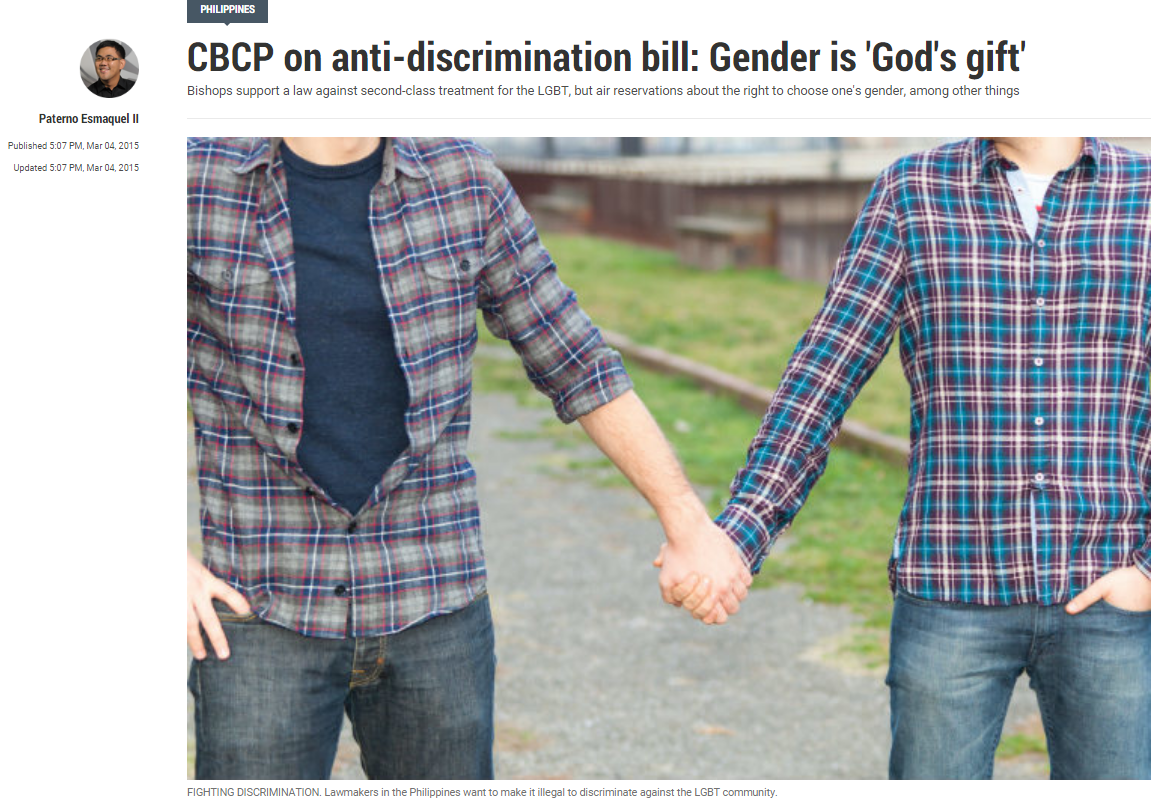 Quote: “MANILA, Philippines – The Catholic Bishops' Conference of the Philippines (CBCP) said it supports a proposed anti-discrimination law as long as it rejects second-class treatment for the lesbian, gay, bisexual, and transgender (LGBT) community.  The CBCP, however, said it cannot encourage choosing one's gender and performing homosexual acts, among other things. It explained that gender and sexuality “must be counted as God’s gift.” The CBCP also asserted its “exclusive right” to choose priests “even on the basis of sexual orientation and gender identity.”
“Insofar as the proposed piece of legislation renders illegitimate the relegation of persons with sexual orientation and gender identity issues to citizens of a lower category enjoying fewer rights, the CBCP cannot but lend its support to this proposed legislative measure,” CBCP president Lingayen-Dagupan Archbishop Socrates Villegas said in a statement Tuesday, March 3.
Villegas said an anti-discrimination law is a “gesture of charity” if discrimination means “that certain individuals, because of sexual orientation or gender identity, are systematically denied fundamental human rights.”  He then urged priests to care for all, including the LGBT community, and warned parents against imbuing in children “the loathing and disgust” for the LGBT. He instructed Catholic schools, for their part, to implement a “zero-tolerance” policy against “the bullying and badgering of persons in such personal situations.”
Villegas explained that treating the members of the LGBT community as outcasts “certainly does not conform to Pope Francis’ vision of the Church as the sacrament of divine mercy and compassion.”
“Persons with homosexual orientation are sons and daughters of God; no less than any of us is. Discrimination against them is contrary to the Gospel spirit. Verbal and physical violence against them is an offense against the good Lord Himself,” the archbishop said.  Villegas issued this statement as the anti-discrimination bill passed the committee level at the House of Representatives on February 11. This means congressmen can begin to debate on the bill in the plenary.
The bill “seeks to prohibit discrimination on the basis of sexual orientation and gender identity,” the bill's principal author, Dinagat Islands Representative Kaka Bag-ao, said in a statement.” -End quote-

Some interesting wording that I am sure will be seen differently by different people.  Let’s start with “lower category enjoying fewer rights”.

What “rights” exactly do homosexuals legally need that they don’t already have?  They have the right to live, food, shelter, to work, join the military, own property, go to school, vote, have a career…what rights are they missing that make them feel “discriminated” against? 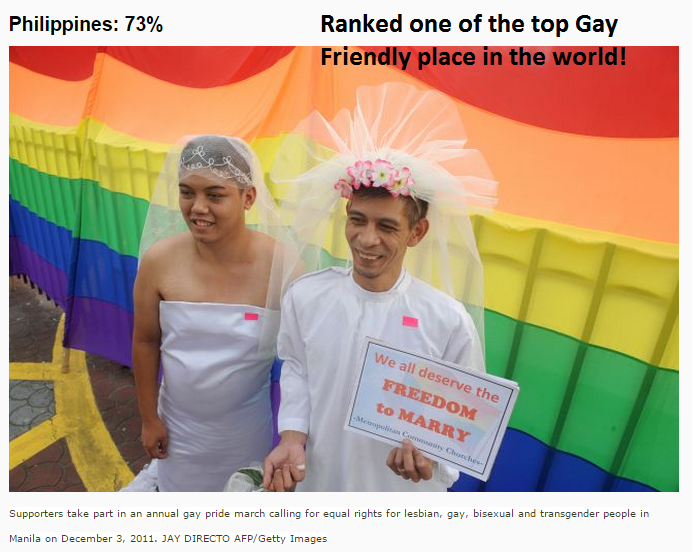 The Bishops here are either being completely naïve or extremely deceptive.  The Philippines is ranked one of THE MOST GAY FRIENDLY places in the WORLD.  Certainly no one is advocating verbal or physical violence against homosexuals and since the Philippines is ranked as one of the top 10 gay friendly places in the entire world, then what "discrimination" are they suffering?

If the Philippines are so “gay friendly”, then what is the reason for this anti-discrimination law?  What's left?

It’s the only “right” they claim they are lacking.  So this is all about gay marriage and activists [in my opinion] are using the Philippine Bishops to push their gay agenda under the mantle of "charity" and ending "discrimination".

What about Archbishop Villegas’ statement “systematically denied fundamental human rights”?  What’s that supposed to mean?  Are they denied the right to food?  Shelter?  Jobs?  To own property?  To vote?  No, they are not.  They have ALL those rights, just like other citizens.

The Vatican has made it quite clear the Church can not and will not recognize any gay unions. 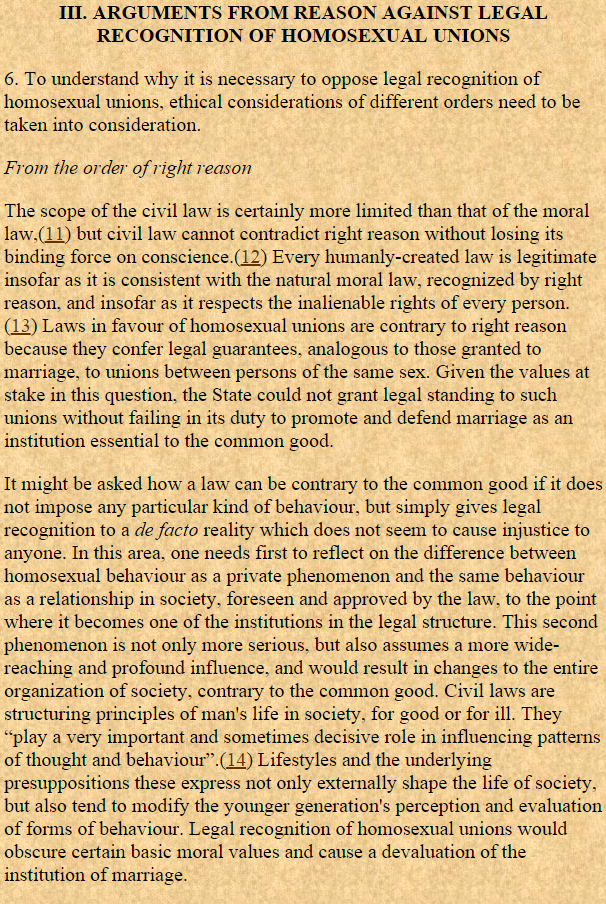 So once more I ask, what “fundamental human right” is the CBCP talking about, that homosexuals currently don’t have in the Philippines if not marriage which the Church cannot and will not support?

And what's that last crack about treating LGBT's like "outcasts" [who exactly is doing that and how will this law change it?] and Pope Francis' view for the Church?  How are they being treated like "outcasts" in one of the most gay friendly places in the entire world?

I wish Archbishop Villegas would have specified exactly what he was talking about.