Be careful of the hashtag #priest

Cathecism: #2351 Lust is disordered desire for or inordinate enjoyment of sexual pleasure. Sexual pleasure is morally disordered when sought for itself, isolated from its procreative and unitive purposes.

I don't spend a great deal of time on Twitter - certainly not as much as most of the people I know do.

Today, I was disgusted by what I found under the hashtag #priest.

The book is called "Priest" and is being promoted on Twitter under the hashtag #priest.

This author already has numerous eager erotica readers on her Facebook page going crazy waiting for this books release later this month.  Not a single person (that I saw) hinted at or mentioned that this might be offensive or wrong.

No, instead they were bemoaning the long wait and "pimping" it to other potential readers.

What happened to our society that it doesn't even occur to people anymore that this is wrong?

The book's description should offend...but instead it seems to feed the smut crowd all the more: 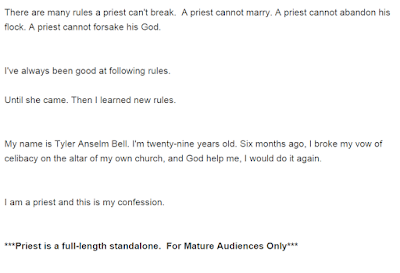 A blasphemous story of lust, evil, blasphemy and fornication- to name only a few descriptions I'd give it.

People have no idea what "love and faith" is anymore.  They are a pathetic evil seeking mob happy to wallow in sin and filth.  Tragic.

The promotional ads (and video -NO link given) for this are even more disturbing...
(I have done my best to block out the offending image). 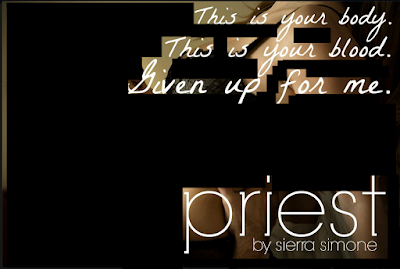 This is so incredibly offensive and hurtful to devout Catholics and simply revolting.

To use the Lord's Holy Words at the Last Supper and twist them into something so disgusting is beyond vile.

I can't help but wonder if this author would write something like this about a Muslim cleric?

I'd like to suggest a hashtag for Catholics on Twitter to protest this blasphemous piece of garbage:  #SayNoToSierraSimone

God have mercy on her and open her eyes to the evil she is doing.

Catechism: 1866 Vices can be classified according to the virtues they oppose, or also be linked to the capital sins which Christian experience has distinguished, following St. John Cassian and St. Gregory the Great. They are called "capital" because they engender other sins, other vices. 138 They are pride, avarice, envy, wrath, lust, gluttony, and sloth or acedia.

Similar story- music video (called "Father") with gay man having sex with a priest before an altar in a Catholic church: http://www.christianpost.com/news/bishop-of-oslo-speaks-out-against-unacceptable-music-video-simulating-gay-sex-with-priest-before-church-altar-140245/