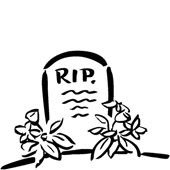 Most of us have heard about the Westboro Baptist Church in Topeka, Kansas. This is the "church" (and I use that word reluctantly) that protests U.S. soldiers funerals, homosexuals and holds signs telling others who they think God hates. This "church" that was founded by Fred Phelps is now planning to protest the actor Heath Ledger's funeral because he once played a gay man in a movie. Shirley Phelps-Roper the daughter of Fred Phelps, has taken issue with the deceased Mr. Ledger because he played an acting role she didn't approve of. For this, the actor's mourning friends and family will have to suffer if the Phelps group can find out where the funeral is to be held. So far, the funeral plans have been kept private as the family wishes. I hope it remains so.
No one and I mean no one, should have to deal with protesting at a funeral. A funeral is a time of mourning and loss and suffering for those grieving the deceased loved one. It's a time of prayer and a time worshiping God while saying goodbye to a loved one.
I find it highly despicable and vile that a group that calls themselves "Christians" would lower themselves to such a vile and disrespectful act as protesting a funeral. If these people truly wished to portray Christianity they should pray for the deceased and those mourning him. Common decency and compassion for a suffering human being is what is needed. Apparently these protesters lack these basic human qualities. I think we all need to pray for the members of the Westboro Baptist Church. And pray that they are unable to protest any more funerals in the future. May Heath Ledger rest in peace and may he be mourned and buried in peace.
Posted by Connecticut Catholic Corner