Say goodbye to cemeteries and hello to composting human beings 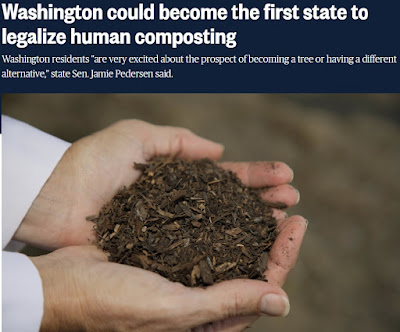 The term is "recomposition" and the idea has taken off in Washington state. Katrina Spade originally cooked up the idea of composting human beings back in 2013 from a farming friend who composts dead livestock. She now has the backing of Democrat Sen. Jamie Pedersen, who is sponsoring a bill in Washington’s Legislature that if passed, would allow families to compost their death family members as early as 2020.


"Pedersen sees recomposition as an environmental and a social justice issue."

It always circles back to social justice. Exactly how it is considered "social justice" is because its cheap-so poor people can compost their dead and then plant a tree in the remains-and composted dead people can help stop erosion.  Senator Pedersen gushes that “People from all over the state who wrote to me are very excited about the prospect of becoming a tree or having a different alternative for themselves”. Becoming a tree eh? 🌳 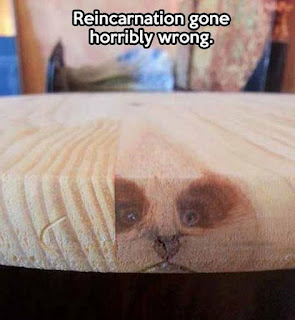 I was curious to what faith-if any Pedersen subscribed to. According to Wiki, Pedersen is an openly gay Lutheran man "married" to another man and together they are raising four sons. Apparently, in Pedersen's branch of the Lutheran faith one can become a tree after death-and he says it like that's a good thing.

I asked a Catholic family member what they thought of human composting and her response was, isn't that what happens to us anyway?

Well, yes, but we aren't scattered in the flower bed or used to mulch the apple tree. Maybe I'm the only one who sees a problem with this. 😕


Quote: "The process involves placing unembalmed human remains wrapped in a shroud in a 5-foot-by-10-foot cylindrical vessel with a bed of organic material such as wood chips, alfalfa and straw. Air is then periodically pulled into the vessel, providing oxygen to accelerate microbial activity. Within approximately one month, the remains are reduced to a cubic yard of compost that can be used to grow new plants."

The Catholic take so far?


"Alkaline hydrolysis may go against Catholic doctrine that requires the human body to be respected, said James LeGrys, theological adviser to the United States Conference of Catholic Bishops. LeGrys was unfamiliar with recomposition, but noted that it could be problematic if body parts are separated in any way."

Imagine how this would work... 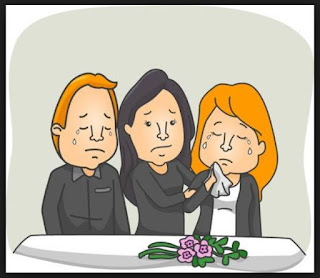 After the Catholic funeral everyone follows the hearse to the local compost heap and tosses dear old granny in. Then a month later they show up with shovels to either stuff granny's compost into burlap bags or a wheelbarrow so they can tote her back home to their garden. 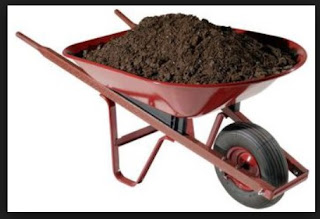 Yeah, seems a bit problematic to me. But what do I know?

I was surprised to learn there is something going on in Germany that is very similar. Though not composted, the cremated remains of people are being put beneath trees in "forest burials".


Quote: "Asked specifically about the growing trend in his native Germany of "forest burials," where people pay to have their ashes in urns interred at the base of a tree in a designated forest burial ground, Cardinal Muller said the German bishops were not thrilled with the idea, but accepted it with the proviso that the tree be marked with the name of the person buried at its base."🌲


"We believe in the resurrection of the body and this must be the principle of our understanding and practice," Cardinal Muller told Catholic News Service, noting that there is a difference between allowing for the natural decay of the body while protecting the environment and seeing the body of the deceased primarily as fertilizer for plants and trees." 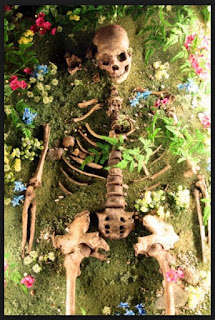 In Christ and not wishing to be composted,

Sheep steals baby Jesus...Mary's having none of that!

Here is Martin promoting social justice Rosary beads for "modern sorrows" telling Catholics to meditate on LBGTQ couples, immigration, Mother Earth and other social justice topics with NO mention of Jesus at all. I'm not kidding...this is what Father James Martin is now promoting on social media. 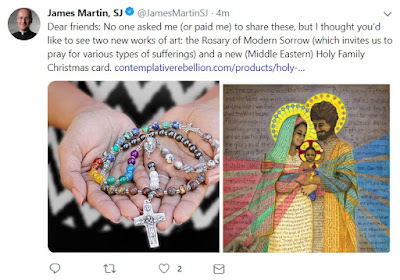 Description of the "Rosary of Modern Sorrows":


The Rosary of Modern Sorrows invites us into guided meditation on the pain and suffering of our brothers and sisters in the U.S. and around the world. Click through the photos to read the specific social justice intentions for each decade.Made by Aline and Nziza: refugees from the Congo living in Charlotte, NC. 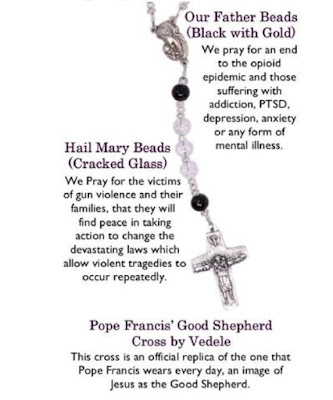 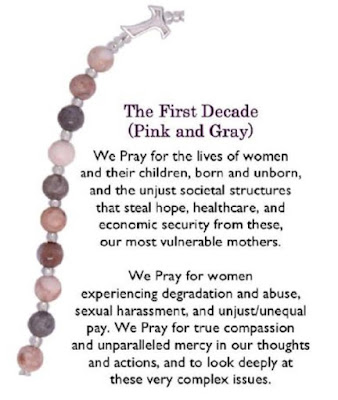 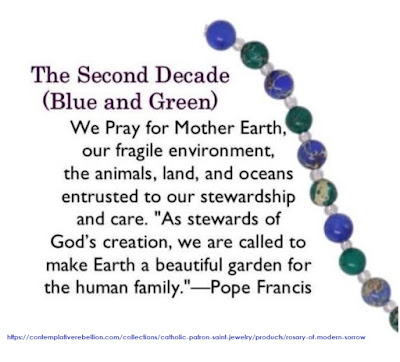 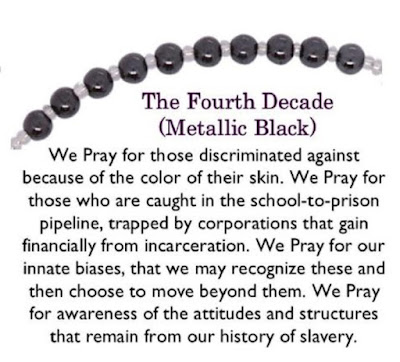 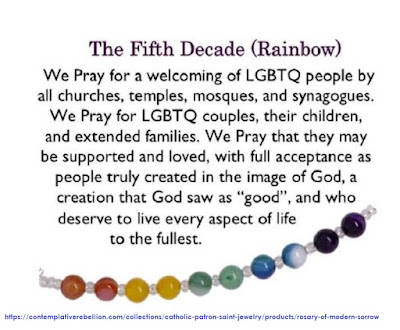 This is the man Francis has promoted to consultor to the Vatican's Secretariat for Communications.

God save us from these clergy!

A few days ago the Huffingtonpost put together a "comedy" of social media backlash over the classic Christmas movie "Rudolph the Red Nosed Reindeer".

HuffPost: Viewers Noticed Some Very Disturbing Details In ‘Rudolph The Red-Nosed Reindeer’ Some of the scenes in this Christmas classic raise all kinds of issues. 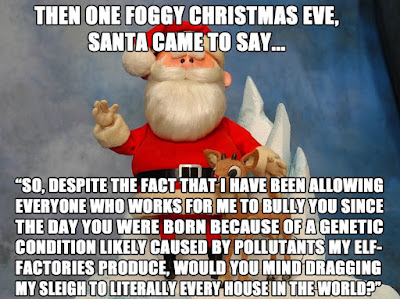 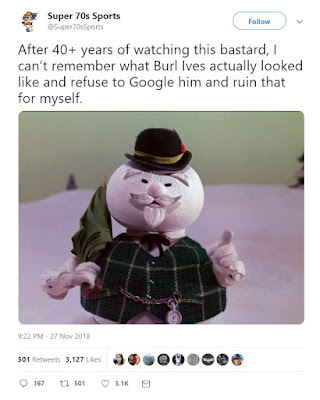 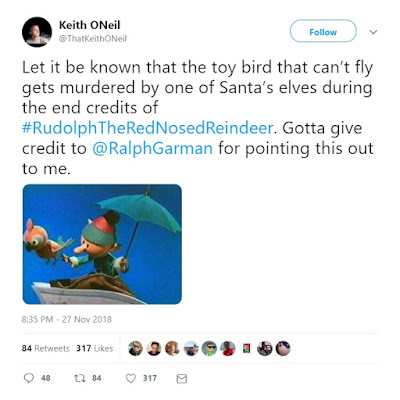 All of these things kids have been saying for decades now. I've always thought that the Santa portrayed in this movie was HORRIBLE. And Rudolph's father was a jerk. The point of the entire movie is that bullying is wrong and that "misfits" fit in! Apparently this was lost on the Twitter folks when they were children. To see them just now figuring it out as adults was just hysterical! 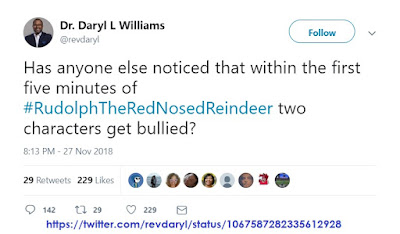 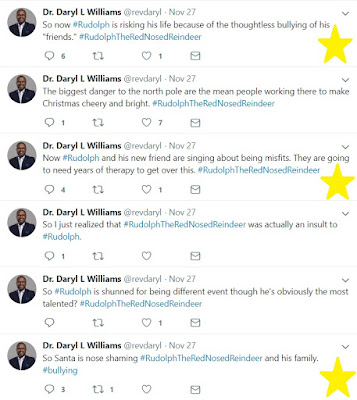 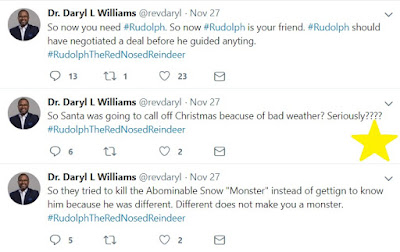 His Twitter profile says he's a pastor, so I'm gonna go out on a limb and guess if he's giving a sermon this Sunday, Rudolph will be playing a part in it. 😏

With all the retched music flooding our world today, it has been decided by the minority that the secular Christmas song "Baby it's cold outside" is "an example of the rape culture" we live in today.

Radio station WDOK in Cleveland, Ohio has banned the song "Baby, its cold outside" because ONE listener called in saying the 1940's song is "inappropriate in 2018" in light of the #metoo movement. 😕

Quote: “It wasn't really our decision. It's the decision of our listeners,” said WDOK midday host Desiray, noting that the Christmas lineup is decided by the station’s listeners.The station said it posted a poll about the song on its web site and a clear majority of respondents supported the decision to remove the song from the station’s lineup." 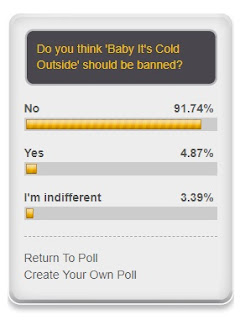 Looks to me like the majority of listeners do NOT want the song banned.
Then the Cleveland Rape Crisis Center got involved and added their two cents...

"In the song, the woman expresses concern about what others may think of her spending the night, as the man tries to convince her to stay.
While some might view the song and its lyrics as a playful, coy back-and-forth from another time, Miller said it may have a different meaning to a rape survivor.
“It really pushed the line of consent,” Miller said. “The character in the song is saying ‘no,’ and they're saying well, ‘does no really mean yes?’ and I think in 2018 what we know is consent is ‘yes’ and if you get a ‘no,’ it means ‘no’ and you should stop right there.”
Miller said the song is an example of the rape culture in which we live, and the first step to preventing sexual violence is to change that."

As for me and my house, I'm keeping my Dean Martin Christmas tunes- including "Baby its cold outside".🎄🎅

One of my very favorites! 🎄 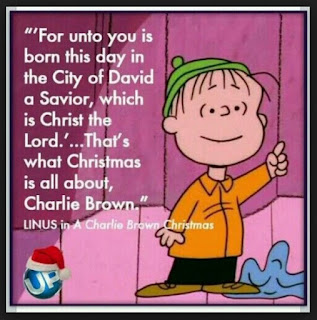 I'm sure the nuts will complain about the Nativity story and sadly, one day I won't be surprised when this Christmas classic is banned from liberal television stations for its Christian content.