The Pope is once again causing confusion... HERE.


IV. The Ministry of Deaconesses

No need for the Pope to tell the world he is going to get a commission together to look into this already looked into and defined subject. He is only causing confusion and discord once again.

God save us from Pope Francis.

I suggest reading "Two very different mothers" if you haven't already to better understand this post.

Assuming you have now read that article on the Salon's Jenny Kutner's very public abortion and the octopus mother (some of you are going 'WHAT? Octopus mother?' - told ya, ya gotta read the first article!), who was willing to give her own life for the lives of her offspring.

Jenny Kutner's abortion stuck with me and month's later when Mother's Day was coming up Kutner was on my mind a lot. I wondered how she would feel on this first Mother's Day since her abortion.  Many women suffer great depression and self loathing.  They bury it and tell people lies because they don't want to admit that what they did is haunting them and having an effect on them.

Abortion stays with a person their entire life. It does not go away.

So I wrote about that first Mother's Day since Kutner's abortion and as Mother's Day approaches again this year I got a few unexpected comments from Jenny Kutner's mother, Pam Kutner... 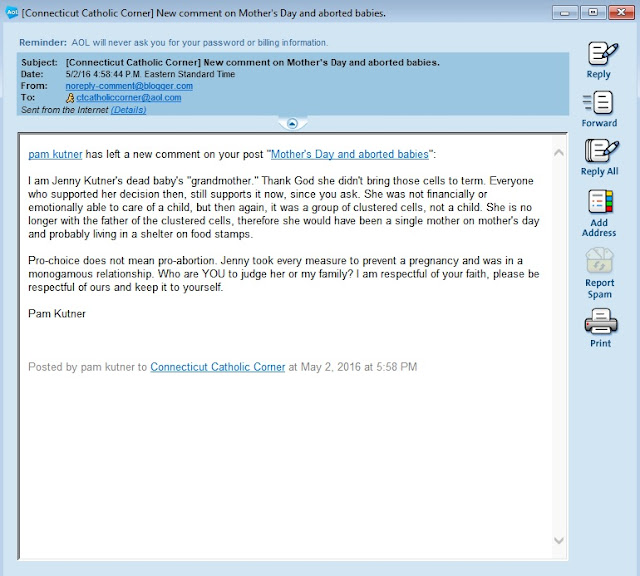 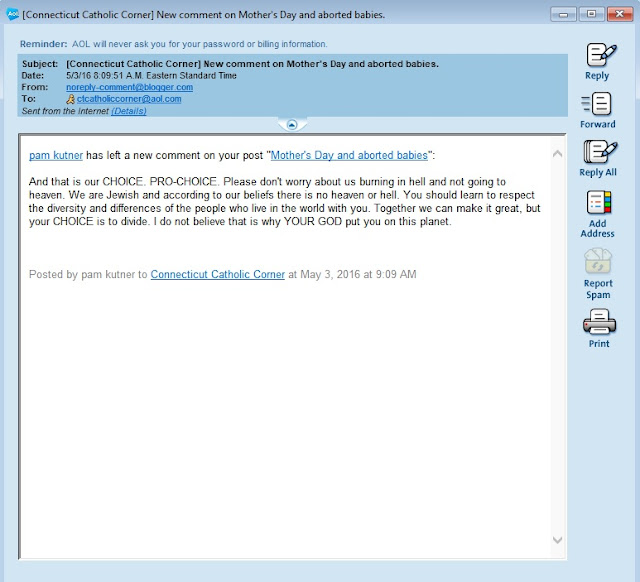 These are the automated email copies of the comments left on my blog because as Pam Kutner and I were discussing this, she decided to call me a "nut" and delete her previous (above) comments from the article page.

But now she's back again (see newest comments in the "Mother's Day and aborted babies" article) and now The Federalist has picked up the story as has dozens of Facebook pages.


So here I am, sharing the story of Jenny Kutner's abortion and Mother's Day once more.

My article from 2015 (Mother's Day and aborted babies): http://connecticutcatholiccorner.blogspot.com/2015/05/mothers-day-and-aborted-babies.html