EWTN: How Can Parents and Grandparents Explain True Love to Teens?

Meet the mother who gave us this beloved Friar! Fr. John Paul and his mother, Debbie Zeller, join Co-Hosts Jim and Joy in their home for a special Thanksgiving celebration. Don’t miss this special “At Home with Jim & Joy”! Airs 2 p.m. ET, Thursday, Nov. 26— exclusively on #EWTN! Find EWTN at www.ewtn.com/channelfinder.#Catholic

It’s a virtue-based formation program for Coaches and Directors of Sports Ministry. SportsLeader's Lou Judd and Paul Passifiume discuss how they advise athletic coaches on ways to instill virtue in their players, both on and off the playing field. Don’t miss “Life on the Rock”! Airs 8 p.m. ET, Friday, Nov. 27— exclusively on #EWTN! Find EWTN at www.ewtn.com/channelfinder.#Catholic

He’s the co-founder of “Integrated Catholic Life” eMagazine. Author Randy Hain compiles heartwarming stories of courage and inspiration from fathers of children with special needs in "Special Children, Blessed Father." Hear him talk about this and another of his books, “Joyful Witness: How to Be an Extraordinary Catholic” with Host Doug Keck on the next “EWTN Bookmark”! Airs 9:30 a.m. ET, Sunday, Nov.29— exclusively on #EWTN! Find EWTN at www.ewtn.com/channelfinder.#Catholic

What is Image Trinity? Guests Greg and Stephanie Schlueter talk about a service that hosts retreats for families to help them become united in friendship and committed to a common vision. You won’t want to miss “At Home with Jim & Joy”! Airs 2 p.m. ET, Monday, Nov. 30— exclusively on #EWTN! Find EWTN at www.ewtn.com/channelfinder.#Catholic

I was sad to read that Mother Angelica's health has declined so much so that she is now on a feeding tube... 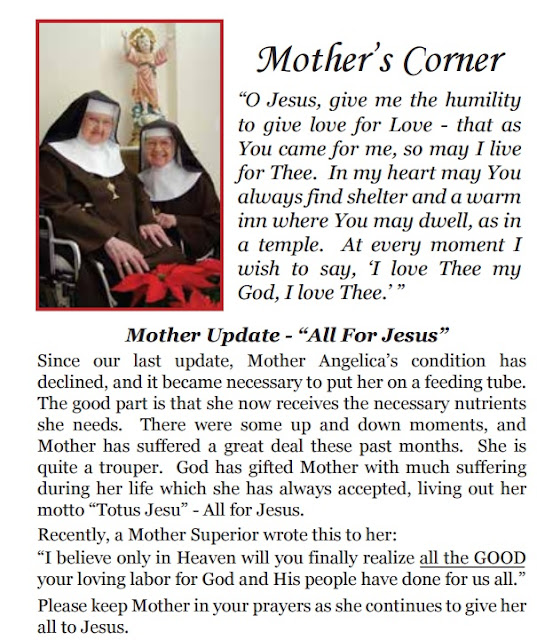 May God bless her!  She has done a wonderful job of bringing Jesus and the Catholic faith to people around the world.

I do believe, she will one day hear, "Well done, good and faithful servant" from our Lord Jesus Christ.


In Christ and praying for Mother Angelica,

Proceeds benefit the ministries of the Franciscan Sisters of the Eucharist

Christmas on the Hill - Holy Angels Holiday Bazaar  will be held on Saturday, November 28, 9:00 a.m. - 3:00 p.m. at Holy Angels Parish Center located at 585 Main Street in South Meriden. Start your holiday shopping with us!  The day will feature 30 Crafters and Vendors, delicious lunch items in our Food Court, Homemade Baked Goods, $100-Value Gift Baskets Raffle, Cemetery Logs, and a Tag Sale. For the children there will be Crafts, Games and a Raffle in the Kid’s Korner with a special visit from Santa! Enjoy a great time of fun with family and friends! For more information, please contact the parish office at 203.235.3822 or office@holyangelschurch.org, or visit www.HolyAngelsChurch.org.

The following prayer can be found in the book "An Exorcist Tells His Story" by Father Gabriele Amorth.

This prayer is one of my daily prayers that I say each night.  In light of the times we are currently living in, I felt compelled to share it here for those who might not know it and as a reminder to those who might have forgotten it.

Please considering adding this Prayer for Deliverance to your daily prayer life.

My Lord, you are all powerful, you are God, you are Father.We beg you through the intercession and help of the archangels Michael, Raphael, and Gabriel for the deliverance of our brothers and sister who are enslaved by the evil one. All saints in heaven, come to our aid.

Lord, you who said, "I leave you peace, my peace I give you", grant that, through the intercession of the Virgin Mary, we may be liberated from every evil spell and enjoy your peace always.  In the name of Christ, our Lord. Amen.

In Christ and praying for us all,

Project Rachel – Entering Canaan Day of Prayer & Healing - Saturday, November 21st - Come begin your healing journey and experience God’s hope and mercy.  For women suffering from a past abortion experience, an Entering Canaan Day of Prayer and Healing will take place on Sat., Nov. 21st.  For further information or to register call our confidential phone line at 203-416-1619 or email us at projectrachel@diobpt.org.

Holy Family Retreat Center, Advent Day or Evening Retreat: The Spirituality of Waiting, with Bill Walsh
Tuesday, Dec 8, 10 a.m.- 2 p.m. or 6-9 p.m. Holy Family Retreat Center, West Hartford. The irony of the Advent season is that right when our faith tradition calls us to slow down and wait patiently in preparation for the celebration of Christmas, our culture sounds the bell to rev up and make our already overly busy and stressful lives even more hectic. Come join us for a conversation on the spirituality of waiting. What are we waiting for and how do we wait for it? Presented by Bill Walsh, associate retreat director at Holy Family, the workshop costs $40 to attend and includes a meal. 860-760-9705. www.holyfamilyretreat.org

The Annual Christmas Festival Weekend at the Shrine of Lourdes in Litchfield, located on 50 Montfort Rd., Rte. 118, Litchfield, CT will include:
Saturday, December 5th:  Gingerbread Nativity Making will take place  from 10 am to 12 noon in Pilgrim Hall. Reservations for this family activity must be made  and pre-paid by December 2nd. To reserve a table, call 860-567-1041 or email: louresshrinect@gmail.com. Each Nativity is $30.

A Candlelight Carol Sing will begin at 7:00 Saturday evening in Pilgrim Hall and process to the Grotto. Cookies & hot chocolate will be served in the hall after this beautiful holy event.

Sunday, December 6th:  The Living Nativity: A re-enactment of the Nativity with live animals, little angels, shepherds, choristers and a real Baby Jesus will take place at 3:00 pm in the Grotto. Cookies & hot chocolate will again be served in Pilgrim Hall.  A suggested $5.00 donation will be greatly appreciated.

The Grotto Gift Shop will be open for all these events.

The Sisters of Life http://www.sistersoflife.org/ (Sr. Mary Gabriel, S.V. is the Event Chair), along with Sisters from other religious communities, are planning and coordinating a first of its kind event -- GIVEN givenforum.org -- The Catholic Young Women's Leadership Forum ~ Cultivating authentic femininity for the life of the Church.

It is being sponsored by the Council of Major Superiors of Women Religious (CMSWR) http://cmswr.org/, in collaboration with the Hilton Foundation and this event will help unleash the gifts of young women within the Catholic Church and the world! GIVEN will bring 300 rising leaders, selected by application, together with Religious and lay leaders from various disciplines for a full scholarship, week-long immersion in faith formation, leadership skills training and networking.

Apply now at givenforum.org.  Women who are accepted to attend GIVEN will receive a scholarship covering the cost of the Forum, including food, lodging and travel.  The deadline for applications is Feb 2, 2016.
Date:  June 7-12, 2016 at Catholic University of America.
Confirmed Speakers:  http://www.givenforum.org/speakers/

Legion of Mary meets every Monday at 7-8 pm at the rectory at St Therese Church at 555 Middletown Avenue, North Haven, CT. Anyone is welcome to come and pray the rosary with us. For more information about the Legion of Mary call Carol Liquori, 203 239-1424.

Bishop Athanasius Schneider speaks out about the Synod


***This blog post is reposted from Rorate-Caeli with their permission (see below).  I have written none of this:

We want to express our heartfelt gratitude to His Excellency for taking the time to analyze and express his views on one of the most critical events in Church history -- one that he too sees as a "back door" to Holy Communion for adulterers, a rejection of Christ's teaching and a Final Report full of "time bombs."
The the coming days, we will also publish an interview with His Excellency, on a wide range of topics. For now, we bring you this important work, exclusively for our readers.

“Non possumus!” I will not accept an obfuscated speech nor a skilfully masked back door to a profanation of the Sacrament of Marriage and Eucharist. Likewise, I will not accept a mockery of the Sixth Commandment of God. I prefer to be ridiculed and persecuted rather than to accept ambiguous texts and insincere methods. I prefer the crystalline “image of Christ the Truth, rather than the image of the fox ornamented with gemstones” (Saint Irenaeus), for “I know whom I have believed”, “Scio, Cui credidi!” (2 Tim 1: 12).

Permission to repost from Rorate-Caeli:

His Excellency Bishop Athanasius Schneider, one of the most visible prelates working on the restoration of the traditional Latin Mass and faith, has penned a nearly 5,000-word response to the Synod exclusively for our readers.Anyone may reproduce or link to this article, but all must reference Rorate Caeli as the source.