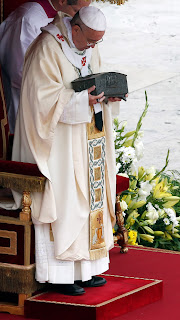 Anyone who has been following my blog [along with family and friends] know that I have had serious issues with Pope Francis since Holy Week.  I have talked about it on my blog HERE and HERE, and I have left comments on the National Catholic Register and the Crescat blog and other Patheos Catholic blogs all year.  Even NBC News took note of my issues with Pope Francis.

I have had two major problems with Pope Francis…1) his style and 2) my inability to love him.

I like people who “play by the rules”, the rules I know.  I like my t’s crossed and my I’s dotted.  That is my comfort zone.  Pope Francis from the beginning took me out of my comfort zone by washing Muslim women’s feet during Holy Week and that made me unable to trust him and because I was unable to trust him, I couldn’t love him. He wasn't following the rules that *I* knew and loved and trusted.

My distrust of him grew with each interview and his “Who am I to judge?” comment because I felt my distrust was proven at those moments.  Pope Francis was a liberal and to me that was as good as the Pharissees in the Bible.

I had accepted him as Pope, but I didn’t like, trust or love him.  I put him in the “bad pope” category and turned my eyes to whoever the next pope would be.

I was DONE with him.

Or so I thought.

Today I watched EWTN’s coverage of the close of the Year of Faith Papal Mass in St. Peter’s Square.  In all honesty I wasn’t expecting much because Pope Francis had never before impressed me and I had already chalked him off- as the saying goes.


“Today’s solemnity of Our Lord Jesus Christ, King of the Universe, the crowning of the liturgical year, also marks the conclusion of the Year of Faith opened by Pope Benedict XVI, to whom our thoughts now turn with affection and gratitude. By this providential initiative, he gave us an opportunity to rediscover the beauty of the journey of faith begun on the day of our Baptism, which made us children of God and brothers and sisters in the Church. A journey which has as its ultimate end our full encounter with God, and throughout which the Holy Spirit purifies us, lifts us up and sanctifies us, so that we may enter into the happiness for which our hearts long.
I offer a cordial greeting to the Patriarchs and Major Archbishops of the Eastern Catholic Churches present. The exchange of peace which I will share with them is above all a sign of the appreciation of the Bishop of Rome for these communities which have confessed the name of Christ with exemplary faithfulness, often at a high price. With this gesture, through them, I would like to reach all those Christians living in the Holy Land, in Syria and in the entire East, and obtain for them the gift of peace and concord.
The Scripture readings proclaimed to us have as their common theme the centrality of Christ. Christ as the centre of creation, the centre of his people and the centre of history. 1. The apostle Paul, in the second reading, taken from the letter to the Colossians, offers us a profound vision of the centrality of Jesus. He presents Christ to us as the first-born of all creation: in him, through him and for him all things were created. He is the centre of all things, he is the beginning. God has given him the fullness, the totality, so that in him all things might be reconciled (cf. Col 1:12-20).
This image enables to see that Jesus is the centre of creation; and so the attitude demanded of us as true believers is that of recognizing and accepting in our lives the centrality of Jesus Christ, in our thoughts, in our words and in our works. When this centre is lost, when it is replaced by something else, only harm can result for everything around us and for ourselves. 2. Besides being the centre of creation, Christ is the centre of the people of God. We see this in the first reading which describes the time when the tribes of Israel came to look for David and anointed him king of Israel before the Lord (cf. 2 Sam 5:1-3). In searching for an ideal king, the people were seeking God himself: a God who would be close to them, who would accompany them on their journey, who would be a brother to them.
Christ, the descendant of King David, is the “brother” around whom God’s people come together. It is he who cares for his people, for all of us, even at the price of his life. In him we are all one; united with him, we share a single journey, a single destiny. 3. Finally, Christ is the centre of the history of the human race and of every man and woman. To him we can bring the joys and the hopes, the sorrows and troubles which are part of our lives. When Jesus is the centre, light shines even amid the darkest times of our lives; he gives us hope, as he does to the good thief in today’s Gospel.
While all the others treat Jesus with disdain – “If you are the Christ, the Messiah King, save yourself by coming down from the cross!” – the thief who went astray in his life but now repents, clinging to the crucified Jesus, begs him: “Remember me, when you come into your kingdom” (Lk 23:42). And Jesus promises him: “Today you will be with me in paradise” (v. 43). Jesus speaks only a word of forgiveness, not of condemnation; whenever anyone finds the courage to ask for this forgiveness, the Lord does not let such a petition go unheard. Jesus’ promise to the good thief gives us great hope: it tells us that God’s grace is always greater than the prayer which sought it. The Lord always grants more than what he has been asked: you ask him to remember you, and he brings you into his Kingdom! Let us ask the Lord to remember us, in the certainty that by his mercy we will be able to share his glory in paradise. Amen!”

Before the end of the homily I was in tears.  I loved the scriptures he discussed and the humility of a sinner asking Jesus to remember him.  That was me.  I always want forgiveness and to be remembered by my Lord.  What Catholic wants to be forgotten by Christ?  As if!

Here I was wanting Jesus to ‘remember ME’, when I was doing my best to ignore and forget my Pope because I hadn’t found a way to understand and love him.  MY faults, not his.  How could I ask to be remembered and forgiven when I was deliberately working to forget Pope Francis was my pope?

I was the guilty thief on the cross being punished for my sin and I knew it.

Then Pope Francis took Saint Peter’s bones into his hands and like the Grinch on Christmas morning my heart broke and began to grow in love.  In that instant I fell in love with my Pope. 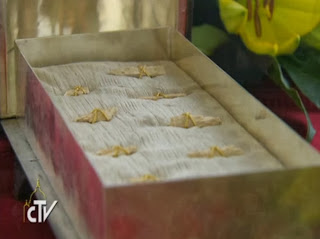 Seeing Pope Francis holding the bones of our first Pope and praying recalled all the scriptures I knew of Saint Peter.  Jesus calling Simon son of John as a disciple, Jesus renaming Simon son of John to ‘Rock’/Peter (John 1:42), Peter being quick to act harshly lopping off a man’s ear (John 18:10) to defend his Lord, Peter being given the keys (Matt.16:18) when Jesus tells him that He will build His Church on Peter our first Pope and so many more verses flooded my mind.  Now here was our first Pope, Saint Peter being held in the hands of our current Pope Francis.

That struck me – profoundly.

Saint Peter was not perfect.  His ways were not always the Lord’s ways…as scripture shows us.  But in the end, Peter did all Christ called him to do.  He was a sinner who became a Saint.  He was a fisherman who became a fisher of men.  A simple man who was called to be pope.

I may not always understand Pope Francis’ ways of doing things, any more than some in Saint Peter’s day would have understood his ways, but the one thing I do know is that just as Simon son of John, Saint Peter was chosen by Christ to be the first pope of Christ’s Holy Catholic Church, so was Pope Francis chosen to be our current Pope.  And for that, I love him.