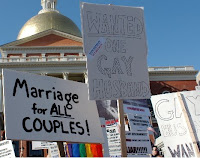 Buster writes: I have a few questions. If me and my same sex partner were to come in to your church and hold hands like an opposite sex couple would we get dirty stares? Would your minister/priest serve me and my partner communion like my MCC does together? Would your church marry me? Would your church give me a position? Probably not. So therefore your church doesn't welcome all people.

My reply: Hello Buster and thanks for writing. I can't answer for every Catholic out there, so I will just answer for myself and what the Church officially teaches, ok? And anyone who would like to share their opinion on this, please comment or email me, I'd love to hear from you.
I suspect a same sex couple holding hands (publicly declaring their relationship) would get quite a few stares and curious looks, maybe even some 'dirty' looks should they enter a Roman Catholic sanctuary that way. My question to you, is why would you want to? The Catholic Church is very clear on same sex relationships- it's a sin. Period. To walk into a Catholic Church the way you described is to flaunt your sinful relationship and your lack of respect for the Catholic faith and try to force your opposing views on an entire faith. You would be very wrong to do so. I don't know if a priest would or would not serve you Communion, I am not a priest and it's not my job to make such judgments. What I can tell you, is that NO sexually immoral person, homosexual or heterosexual should even go up for Communion unless they have confessed their sins, repented of them and gone to Confession for absolution. To take Communion in an unworthy manner is a grave sin on yourself! Why would you do that to yourself?
Catholic Catechism #1385 "To respond to this invitation we must prepare ourselves for so great and so holy a moment. St. Paul urges us to examine our conscience: "Whoever, therefore, eats the bread or drinks the cup of the Lord in an unworthy manner will be guilty of profaning the body and blood of the Lord. Let a man examine himself, and so eat of the bread and drink of the cup. For any one who eats and drinks without discerning the body eats and drinks judgment upon himself." Anyone conscious of a grave sin must receive the sacrament of Reconciliation before coming to communion."
You also ask if the Catholic Church would marry you (assuming you mean a same sex marriage). The answer is no. The Catholic Church teaches and believes that marriage is a sacrament between one man and one woman- until death do us part. That's it.
Catholic Catechism #2360 "Sexuality is ordered to the conjugal love of man and woman. In marriage the physical intimacy of the spouses becomes a sign and pledge of spiritual communion. Marriage bonds between baptized persons are sanctified by the sacrament."
Catholic Catechism #2359 "Homosexual persons are called to chastity. By the virtues of self-mastery that teach them inner freedom, at times by the support of disinterested friendship, by prayer and sacramental grace, they can and should gradually and resolutely approach Christian perfection."
The last question you ask is about a position. I don't know what you mean by this. If you mean employment of some type or if you mean a position with the Church like as an altar server or Eucharistic Minister etc. As far as a job working at the church I would think that wouldn't be an issue because how would anyone know you were in a gay relationship unless you broadcast it? For example if a gay electrician applied for a job to rewire a parish, how would anyone know that he/she was gay unless they perhaps showed up wearing a shirt that broadcast it or having some pro-gay sign on their vehicle to make a statement? That could and probably would be a problem for the Catholic parish. Though I really couldn't say with any sort of authority on this matter. As far as a position within the Church (i.e. Eucharist minister), that I don't believe would happen because you are obviously embracing sin and refusing correction from God's Church on this matter. Blatant opposition to Church authority and rejecting of the faith is a fast way to excommunication from the Church, not a position with the Church.
You make one final statement about the Church not welcoming all people. You are wrong. The Catholic Church does welcome all people, the Church also teaches all people to repent from sin. That's the part some people have problems with. That is the part that will stop same sex couples from ever marrying within the Catholic Church because the Church will not condone or over look the sin to suit society. The Church's authority comes from God and God alone. It's not a democracy and it never will be.
Posted by Connecticut Catholic Corner