It's not always easy, but it is always necessary.

First Reading
30 Anger and wrath, these also are abominations, and the sinful man will possess them. [Sir.27:30]

1 He that takes vengeance will suffer vengeance from the Lord, and he will firmly establish his sins.
2 Forgive your neighbor the wrong he has done, and then your sins will be pardoned when you pray. 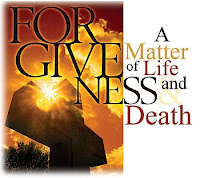 3 Does a man harbor anger against another, and yet seek for healing from the Lord?
4 Does he have no mercy toward a man like himself, and yet pray for his own sins?
5 If he himself, being flesh, maintains wrath, who will make expiation for his sins?
6 Remember the end of your life, and cease from enmity, remember destruction and death, and be true to the commandments.
7 Remember the commandments, and do not be angry with your neighbor; remember the covenant of the Most High, and overlook ignorance.
8 Refrain from strife, and you will lessen sins; for a man given to anger will kindle strife,
9 and a sinful man will disturb friends and inject enmity among those who are at peace. [Sir.28:1-9]


Psalm Reading
1 Bless the LORD, O my soul; and all that is within me, bless his holy name!
2 Bless the LORD, O my soul, and forget not all his benefits,
3 who forgives all your iniquity, who heals all your diseases,
4 who redeems your life from the Pit, who crowns you with steadfast love and mercy,
9 He will not always chide, nor will he keep his anger for ever.
10 He does not deal with us according to our sins, nor requite us according to our iniquities.
11 For as the heavens are high above the earth, so great is his steadfast love toward those who fear him;
12 as far as the east is from the west, so far does he remove our transgressions from us. [Pslam 103:1-4, 9-12]

7 None of us lives to himself, and none of us dies to himself.
8 If we live, we live to the Lord, and if we die, we die to the Lord; so then, whether we live or whether we die, we are the Lord's.
9 For to this end Christ died and lived again, that he might be Lord both of the dead and of the living.
[Romans 14:7-9]

21 Then Peter came up and said to him, "Lord, how often shall my brother sin against me, and I forgive him? As many as seven times?"
22 Jesus said to him, "I do not say to you seven times, but seventy times seven.
23 "Therefore the kingdom of heaven may be compared to a king who wished to settle accounts with his servants.
24 When he began the reckoning, one was brought to him who owed him ten thousand talents;
25 and as he could not pay, his lord ordered him to be sold, with his wife and children and all that he had, and payment to be made.
26 So the servant fell on his knees, imploring him, `Lord, have patience with me, and I will pay you everything.'
27 And out of pity for him the lord of that servant released him and forgave him the debt.
28 But that same servant, as he went out, came upon one of his fellow servants who owed him a hundred denarii; and seizing him by the throat he said, `Pay what you owe.'
29 So his fellow servant fell down and besought him, `Have patience with me, and I will pay you.'
30 He refused and went and put him in prison till he should pay the debt.
31 When his fellow servants saw what had taken place, they were greatly distressed, and they went and reported to their lord all that had taken place.
32 Then his lord summoned him and said to him, `You wicked servant! I forgave you all that debt because you besought me;
33 and should not you have had mercy on your fellow servant, as I had mercy on you?'
34 And in anger his lord delivered him to the jailers, till he should pay all his debt.
35 So also my heavenly Father will do to every one of you, if you do not forgive your brother from your heart."
[Matthew 18:21-35]