Thank you God for giving us Pope Francis!!
I am thrilled with our new pope and pray he lives a long life and serves the Church well. 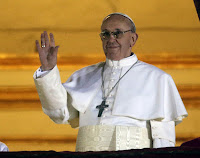 I (along with most of the world) spent the last two days staring eagerly at a chimney...complete with the cleverly named "SistineSeagull" perched upon the chimney top waiting eagerly for white smoke.


Between marathon emails with my Catholic friends, a tweeting Twitter account holding seagull and non-stop phone calls I am exhausted and I barely left the house!  I scheduled my work and plans to give me the most time in front of the television set during the 'burning of the votes' scheduled time slots so I would be sure to see the white smoke when it came.


When the white smoke came billowing out, my goosebumps had goosebumps!  I was so excited (and still am!) to know I had a pope.  My mind raced...would he be Italian?  Or American?  Or Polish?  Or German?  What name would he pick?  Would St. Malachy's prophecies be put to rest or pushed into full speed ahead?  The questions flooded my mind as I stared at that chimney pipe and seagull hour after hour.

I could not have been more pleased with God's choice for our next Pope.  A wonderful humble man now takes up the Keys of Saint Peter and will lead our Church forward in the troubled times we live in.

We Catholics have truly been blessed today.