Will someone shut Sister Margaret Farley the hell up? Anyone? 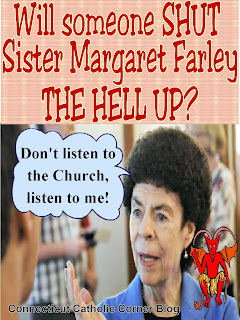 In my opinion: probably. (I base this view on Mark 9:42 which warns those who cause OTHERS to fall into sin- see below and the Catholic Catechism that says 'mortal sin' IS in fact Mortal #1861)

Yes, I think that badly of this anti-Christ heretic nun and all 'nuns' like her and some Bishops and priests as well.

To all the Bishops and priests who REFUSE to put a stop to heretics like Sister March-With-Me-To-Hell Farley, you'd better repent too or you will be right behind her!

Jesus wasn't kidding around when he said "STOP AND SIN NO MORE OR SOMETHING WORSE WILL HAPPEN TO YOU!" [John 5:14]

Or when he said it is better to "gouge out" your own eye or cut off your own hand to prevent you from falling into sin [see scriptures below].

For the life of me, I don't know WHY the Church doesn't PURGE itself of these evil loving people (along with the child abusing priests).  They have only ONE place in the Church and that is in a Confessional. If they aren't willing to repent and they continue to teach heresy they need to be EXCOMMUNICATED just like Martin Luther and others before and after him. Why doesn't the Church excommunicate like it once did?  Out of fashion???

Excommunication is NEEDED and required by Sacred Scripture- 1 Cor.5  It is necessary for the salvation of souls!  What could be more important than that? (Oh right... immigration reform! *slaps-forehead*)

Mortal Sin means DEATH- the eternal kind.  No heaven, just eternal hell. There is no second chance after death.  You die, you are judged and you get exactly what you deserve.

The Church, ALL her Bishops and priests deacons and nuns MUST, ABSOLUTELY MUST put a STOP to heretics who are leading people into MORTAL SIN.

If our clergy REFUSE to put a stop to heretics, the lost souls are ON THEIR HANDS and they will give an accounting for it AND be judged for it.

The Church's SOLE purpose on earth is to spread the Gospel SO SOULS CAN BE SAVED.  If the Church's religious REFUSE to do what Christ called them to do, they aren't worth the space they take up in our Church.

That's my opinion on this matter because I am SICK TO NEAR DEATH of the Sister Margaret Farley's of the world - and the Bishops who refuse to do what they are called to do along with them!  Enough is enough.

What set me off this time?


"Sister Margaret Farley — a Catholic nun who graduated, taught and served as a board trustee at the University of Detroit-Mercy and is a retired Yale Divinity School professor — is not shutting up about supporting gay marriage and other positions that prompted the Vatican last year to censure the prominent theologian’s book on sexual ethics.
“You just can’t back down and say, I apologize, because it would contradict one’s integrity,” Farley, 78, who became a Sister of Mercy through the order’s local congregation, told about 400 people gathered Friday at Mercy Center in Farmington Hills."

"Farley said she is delighted by the new pope, who has a down-to-earth, approachable style. “He seems teachable,” she said, and hoped he will listen to the many Catholic women who call for change.
“I think that women at this juncture are in some way key, because, for example, we do have the problem that there are not enough priests,” Farley said. “I think that eventually it will be necessary to ordain married men and women, married or not. But how that development will finally take place, what the evolution will be, I don’t know."

"Farley was invited to speak in metro Detroit, where she has family and friends, by a local group of progressive Catholics — which includes laypeople, priests and religious — known as the Elephants in the Living Room. In July, they helped arrange the metro Detroit visit of a controversial Austrian priest, the Rev. Helmut Schuller, who also challenges Vatican bans against married priests and other issues."


Question:  WHY WON'T SOMEONE IN THE CHURCH TELL HER TO SHUT UP OR GET OUT?  Heretics are NOT to be tolerated IN the Church.  Hasn't anyone read Church history?  The Council of Trent perhaps?

All thoughts are my own... I am NOT judging that ANYONE as ALREADY judged for Hell - NO ONE is already condemned to Hell, judgment comes after death and God mercifully until that very final moment we ALL have the opportunity to repent and be forgiven. What I am saying is that certain ROADS LEAD TO HELL, and liberals in the Church are on those roads (though they are not alone). Hopefully they will get off those roads by repenting and never turning back.  That is my prayer for the liberals in the world to call themselves "Catholics".

To BE Catholic, you must BELIEVE what the Catholic Church teaches- anything else is a closet protestant or an atheist- take your pick, but please don't call yourself "Catholic", you aren't fooling anyone.


John 5:14
New Revised Standard Version Catholic Edition (NRSVCE)    14 Later Jesus found him in the temple and said to him, “See, you have been made well! Do not sin any more, so that nothing worse happens to you.”