My opinions are not going to be politically correct, but the facts I give will be biblical and thus coming from God, correct. 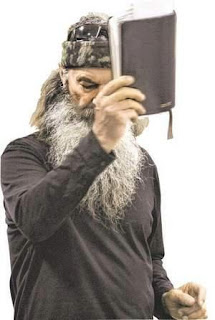 I am a Duck Dynasty fan, recently Phil Robertson the patriarch of the family, was INTERVIEWED (asked his OPINION) and made a Christian statement about the sin of homosexuality and how it is forbidden in the bible (fact), he continued to give his thoughts in THE INTERVIEW on how he personally couldn’t understand why a man would prefer another man over a woman and all a woman had to offer (his personal opinion during an interview).

“Everything is blurred on what’s right and what’s wrong… Sin becomes fine. Start with homosexual behavior and just morph out from there. Bestiality, sleeping around with this woman and that woman and that woman and those men.
Robertson then paraphrased Corinthians from the Bible: “Don’t be deceived. Neither the adulterers, the idolaters, the male prostitutes, the homosexual offenders, the greedy, the drunkards, the slanderers, the swindlers—they won’t inherit the kingdom of God. Don’t deceive yourself. It’s not right.”

For sharing a biblical fact and answering a question with his personal opinion IN AN INTERVIEW TO HEAR HIS PERSONAL OPINIONS- he has been suspended from the hit show “indefinitely” because…you guessed it… the oh so INTOLERANT gays are whining and screaming their perverted heads off.

[insert whiny voice] GAY INTOLERANT WHINE FROM GLADD:  “Phil and his family claim to be Christian, but Phil’s lies about an entire community fly in the face of what true Christians believe,” said spokesperson Wilson Cruz. “He clearly knows nothing about gay people or the majority of Louisianans – and Americans – who support legal recognition for loving and committed gay and lesbian couples. Phil’s decision to push vile and extreme stereotypes is a stain on A&E and his sponsors who now need to reexamine their ties to someone with such public disdain for LGBT people and families.”

Phil Robertson quoted the BIBLE – there is NOTHING “vile” in the quote, but rather in the ACT OF HOMOSEXUAL RELATIONSHIPS- now THAT is vile!  It is an ABOMINATION TO GOD and as such Christians, be they Catholic or Protestant have the RIGHT to call it what it is…SIN.  That is exactly what Robertson did.

What's the point of AN INTERVIEW if you can't give your view??

FACT: According to Oxford dictionary an "interview" means:

verb
*to question (someone) to discover their opinions or experience:in a survey more than half the women interviewed hated the label “housewife.”

Gee, imagine that!  Interviewing someone means asking questions to find out the persons opinions!

Not supporters of the gay agenda apparently!

My opinion:  Gays need to SHUT UP and quit whining already!  Every time they scream “tolerance” to THEIR cause I feel like screaming back at them "HYPOCRITES!".  There is not a tolerant blood cell in their entire body!  Not one, for ANYONE who disagrees with them!  It is NOT hateful to oppose gay marriage.  It does NOT mean we have a “fear” of homosexuals.  It means we (Christians) TRUST IN GODS WORD.  God called it a sin, then it IS a sin. Period.  God did NOT ask us our opinion on what should or shouldn’t be offensive to Him, He told us straight (no pun intended) up what is sin and that such unrepentant sin WOULD send us to HELL for eternal damnation.  Period.

If a Christian, ANY Christian voices their OPINION or QUOTES THE BIBLE, the gay agenda mob are INSTANTLY attacking them, threatening them and (in the media) SUSPENDING them!  The message is clear:  NO TOLERANCE FOR CHRISTIANS.

Had Duck Dynasty’s star been a Muslim and made the SAME comments I have to wonder if ANYONE would have said anything?  When was the last time you heard ANY Muslim attacked by gays/liberals for opposing gay marriage or the gay agenda?  When?  Has ANYONE in the media covered such a story?  I haven’t seen it.

But EVERY time a Christian mentions opposition to any part of the gay agenda they are ATTACKED and called “homophobic”.

Fact:  According to the Oxford Dictionary, “homophobia” is:

Lev. 20:13 If a man lies with a male as with a woman, both of them have committed an abomination; they shall be put to death; their blood is upon them.

Romans 1:26-28 For this reason God gave them up to degrading passions. Their women exchanged natural intercourse for unnatural, and in the same way also the men, giving up natural intercourse with women, were consumed with passion for one another. Men committed shameless acts with men and received in their own persons the due penalty for their error. And since they did not see fit to acknowledge God, God gave them up to a debased mind and to things that should not be done. 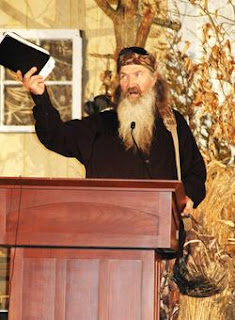 Duck Dynasty’s star Phil Robertson did NOTHING WRONG.  HE was being interviewed and ASKED his OPINIONS.  He answered and now he is being crucified for it by the perverts who are headed for Hell in a hand basket and don’t even know it.

When Christians tell others what is sin, they ARE LOVING THEM!  To keep quiet and not tell people what is sin is in DIRECT OPPOSITION to what Jesus Christ ORDERED us to do (ie The Great Commission - Matt.28:19-20).

So spare me the "You big mean Catholic! Pope Francis said 'Who am I to judge'...blah, blah, blah".  The Pope didn't rewrite the Bible OR the Catholic catechism...

2357 Homosexuality refers to relations between men or between women who experience an exclusive or predominant sexual attraction toward persons of the same sex. It has taken a great variety of forms through the centuries and in different cultures. Its psychological genesis remains largely unexplained. Basing itself on Sacred Scripture, which presents homosexual acts as acts of grave depravity,141 tradition has always declared that "homosexual acts are intrinsically disordered."142 They are contrary to the natural law. They close the sexual act to the gift of life. They do not proceed from a genuine affective and sexual complementarity. Under no circumstances can they be approved.


2359 Homosexual persons are called to chastity. By the virtues of self-mastery that teach them inner freedom, at times by the support of disinterested friendship, by prayer and sacramental grace, they can and should gradually and resolutely approach Christian perfection.

Facts are facts and opinions are opinions, its too bad in our society today the only opinions or facts ALLOWED are those of homosexuals and those who support them.

Not to worry Christians, we've got our bibles and we know how it all ends and who the winners and losers will be.  From now till then all we can do is tell the Truth.

Keep the faith and never shut up about it- there's a crown in heaven for those who stand with God's Truth.