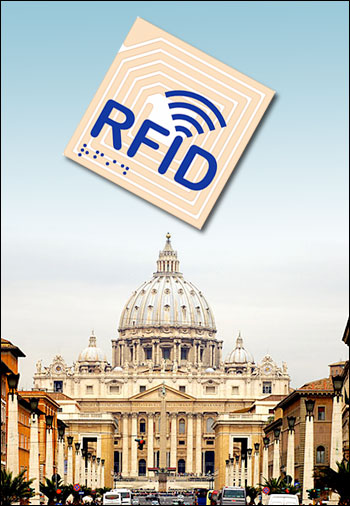 I am not half way through my emails and already I have read five emails telling me Pope Francis is the anti-Christ because he’s forcing all Catholics to be micro-chipped.

The source of this “Run for your lives, it’s the end of the world” news…?

QUOTE: "In a controversial move by the Catholic church, Pope Francis has come out in vocal support of RFID Chip technologies and the extraordinary potential they hold for mankind. The outrage stems from a belief held by many Evangelicals, Fundamentalists and Catholics, that RFID implants are the Mark Of The Beast, spoken about in their Holy Book’s chapter regarding the end of the world.
During the Pontiff’s weekly general address, he spoke to the crowd about his view on the RFID technology, and assured his many followers that no spiritual harm can come from receiving an RFID implant.“We have examined the scriptures thoroughly, and I can conclusively say that there’s nothing to indicate that RFID Chips are Satanic in anyway. If anything, these devices are a blessing from God himself, bestowed upon humanity to solve many of the world’s ills.”He went onto urge his devotees to be open minded in this era where brilliant new technological advancements are being made everyday. The Bishop of Rome explained to those in attendance his excitement over making RFID implantation a mandatory procedure for all employees and residents of the Vatican." -end- See more at: http://nationalreport.net/pope-francis-public-support-rfid-chip-implantation/#sthash.Tj879XNN.dpuf

Just a heads up to the Chicken Little’s out there running around screaming “The sky is falling!  The sky is falling because Pope Francis is the micro-chipping anti-Christ”!... the National Report is a SATIRE news website.

I am AMAZED at the number of people who in the comments (read them below the article) and emails actually believe this stuff.

For example, look at what Katrina wrote in the comments area:

KatrinaMay 21, 2014 at 9:25 amNow I know why the so-called ‘West’ has welcomed this pope and grilled the previous one until he resigned. This pope is welcoming the antichrist. These poor people who are Catholics and follow the pope like sheep are now damned unless they start thinking for themselves and stand up for their rights.

I don't know if I should laugh or cry at Katrina telling anyone else they have to start 'thinking'.

God save the gullible from themselves!

Have any of these people taken the time…just a moment to ask themselves “Should I believe everything I read on the Internet?”

Did they bother to read the other ‘news’ stories reported on National Report.net?  Oh you know, things like “Obama Announces Plans to run for Third Term President”

QUOTE:  “Washington, DC — President Barack Obama shocked the country this morning with news that he is running for a third term.

“I can’t abandon the American people now when they need me more than ever,” Obama told reporters at a press conference this morning. “We’ve come this far as a nation, now is not the time to do something different. This is the change you wanted and this is the change you’re getting.” –end- See more: http://nationalreport.net/obama-announces-plans-third-term-presidential-run/

Quote: “Seemingly spontaneously formed  small groups of volunteers, in clusters of about a dozen, are now aiding law enforcement in the search. Many of the bewildered volunteers carrying flags and holding up cardboard signs reading, “Obama Is Hitler”, “Were Taking R Country Back!”, and “Where are you at?”In interviews with the National Report,  most of the volunteers look dumbfounded and confused over the loss of so many people. The enormity of such a loss seems to have a large percentage of the volunteers in a state of shock, as many have been observed shouting and rambling incoherently, calling this a conspiracy.It was also noted by this reporter, that many of the searchers were attired in camouflage clothing which may be preventing them from being seen by the 10 to 30 million souls they are searching for.”- See more at: http://nationalreport.net/baffling-mystery-washington-dc-10-30-million-people-reported-missing/#sthash.bHFNKwLz.dpuf

Does that sound like REAL news to any of you?

Don’t people think something like that would be mentioned on oh, you know news media like CNN, FOX News or even MSNBC?

In Christ and not getting micro-chipped by the Holy Father,