What about all the scandal caused by Catholic laity? 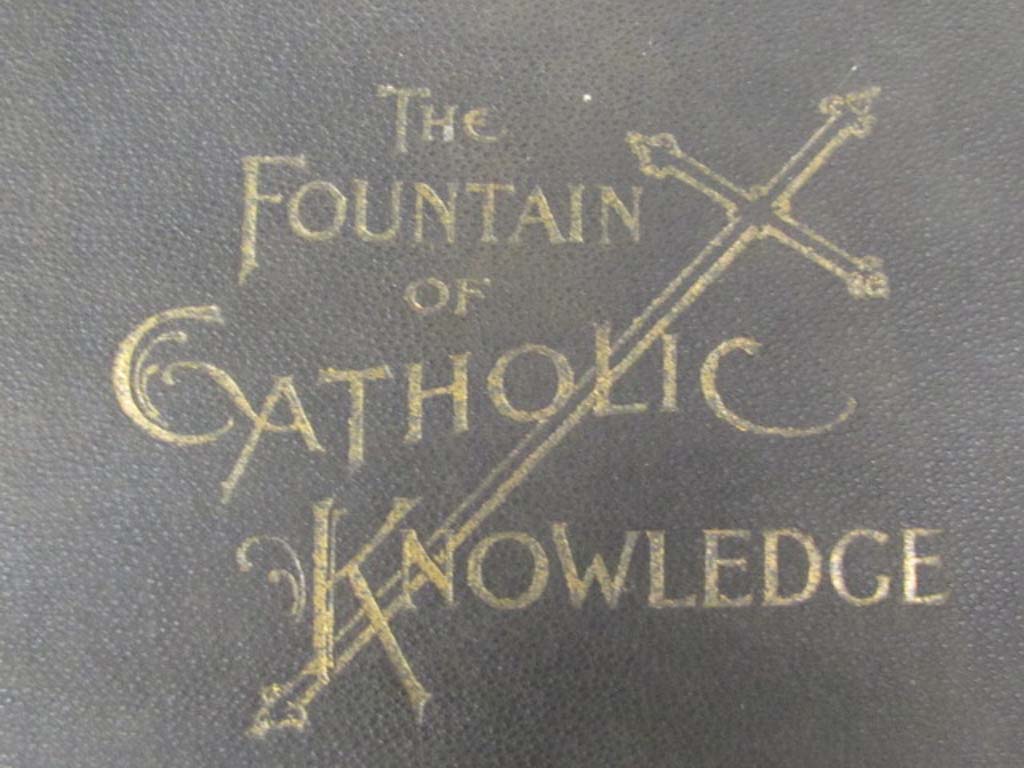 I hoard collect old and rare Catholic books.  I love reading these old books and want to share them with my blog readers.  I’ve got bookshelves in my house filled with them in assorted sizes complete with that wonderful (to me) old musty book smell. ;)

One of them I want to quote from today is called “The Fountain of Catholic Knowledge” written in 1899 and published in 1900. 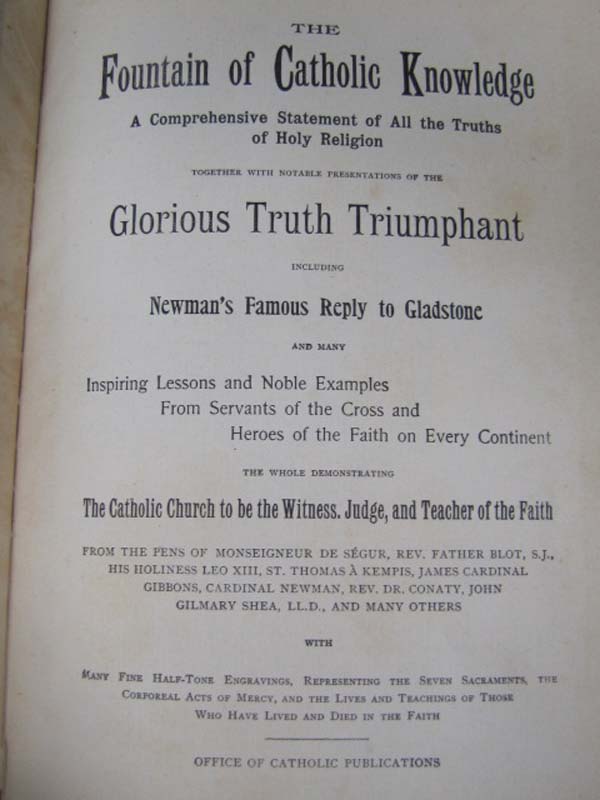 It’s a large book and this is just a small sample of one topic in it.  The section I am sharing today, and the topic I wish to discuss is on the Church’s teaching of the terrible sin of scandal and how very damaging it is and how this sin ruins souls and causes the loss of salvation if not corrected and repented of.

Sadly, the media is also full of reporting priests supporting gay ‘marriage’, supporting women priests, abuses at Mass, child molestation and cover ups…you get the picture.  Depending on the media source and topic it may or may not call these things 'sin'.  But this isn't about the media, it's about us Catholics.

These ripples of scandal have spread across the globe causing numerous Catholics to leave Christ’s Holy Catholic Church.

But what about all the scandal caused by Catholic laity?

Are you still scandalized when you see a Catholic “remarry” outside the Church after a divorce, hence entering into public adultery?  Are you scandalized by adultery or do you happily attend the wedding and buy the adulterating couple a wedding gift?

Are you still scandalized by pre-marital sex or have you become so desensitized by it that the sin of fornication barely registers in your brain as you pick out a house warming gift for the fornicators in your family who insist on living together before marriage?

Are you getting the picture yet?

These sins are no longer taboo in our secular society.  Adultery, fornication, lies, lust, greed etc are the norm on television, in books, magazines, online… we are submerged in the ‘normalcy’ of sin.  Secular society has declared ‘sin’ to be…well, no longer sin at all.  There is no sin today according to our society.  Society tells us that if you live with your boyfriend/girlfriend before marriage that it’s “your own business” and no one else’s.

People don’t have to see you having sex to figure out if you are living with someone as boyfriend/girlfriend sharing the same bed you are committing fornication.

Scandal is the ripple effect of one person’s sin made public.  When was the last time you heard a homily on the sin of scandal?  I never have.  Thankfully, I am a Catholic bookhoarderworm so I read these wonderful old Catholic books that teach me the depth of these Catholic teachings.

Please carefully read the below quote and reflect on your own life any occasion that you might have caused scandal and the ripple effect that went out into the world because of it.  If upon reflection you are free from the sin of scandal, good for you!  If not… get thee to confession as soon as possible.

[quote]  “To cheat and to steal are, certainly, not virtuous actions; if we do either, we sin against God, our neighbor, and ourselves; but to give scandal to others is still worse, for this is one of the greatest dangers which can menace a soul.

Scandal is the evil which we do to others by the bad example that we give them.

A man does wrong, no one knows it; he is guilty in the sight of God; he will lose his own soul if he does not repent.  This is very certain and very lamentable, but at least his example has perverted no one.  But suddenly a man hides his wrong-doing no longer, his evil life becomes known and spoken of, he even speaks of it himself, boasts of it, and appears to glory in a miserable notoriety.  Others, attracted at first by curiosity, begin to make a little circle around him, and to regard him with admiration.  “At all events this man must get some pleasure and excitement out of life!” they begin to say; and thus it follows that the evil which they regarded too closely strikes them, they are gradually overpowered by it; and next we may see them enjoying themselves after the manner of their model; they imitate him, and soon they desire to go still further than he!  This is scandal!

One man offended God; at this hour there are ten, a hundred, a thousand… Death strikes the author of this scandal; he goes to stand before his heavenly Judge and render an account of all those thousand souls lost by his example!

Thus you see how incalculable are the effects of bad example.  How is it possible completely to retrieve a scandal?  We may desire to do it, but often it is quite beyond our power.  Our Lord said, ‘Woe to that man by whom scandal cometh.  It were better for him that a millstone should be hanged around his neck, and that he should be drowned in the depth of the sea.’  He who knows everything, knew well that those who give scandal to their brethren stand upon the brink of their eternal ruin!  But, on the other hand, how happy a thing it is to give a good example!  It is to work in union with God Himself for the salvation of souls.

And how great is this power which each one of us possesses!  Consider the case of a young man who has been so unhappy as to give scandal to others by setting them an evil example; if he only examine himself, if he reflect, and consider the terrible account he will have to render, he becomes changed and converted; he was openly wicked, and is now openly a Christian!  His companions ridicule him; he pities them, he advises them to imitate him in his conversion; he sets an example of patience and temperance, of industry and morality, and, in the end, succeeds in saving a great number of those whom he would most certainly have led to destruction.

It is impossible to calculate the immense influence of example.  By means of this all-powerful influence whole families, parishes, schools, and communities are either saved or lost.  I have known a numerous family, worse than indifferent, become a model of religion and fervor, thanks to the holy influence of but one of its members, who, by turning to God with his whole heart, caused the light of faith to shine upon all who surrounded him through the force of example alone.  And I have known another family in which the apostasy of the eldest son led away into heresy a number of his brothers and sisters… How many parishes have been perverted, corrupted to their very centers by the scandal given by one priest!  In a college, in a school, one thoroughly bad child will entice into evil the greater part of his schoolfellows, and if the superiors do not arrest the contagion from its very commencement, by driving this black sheep out of their midst, the whole flock will surely be lost.  And finally, in a State, how incalculable are the evils, which, by a fatal necessity, are always produced by the immorality of a sovereign or by his irreligion!  Now, what is the conclusion to be drawn from all this?  That scandal is an immense evil.  He who has given scandal has but one chance of salvation, and that is by becoming entirely changed and setting a good example to those whom he formerly scandalized.
Human respect will often prove a stumbling-block; but we must gather courage; those who have dared to do evil must also dare to be repentant in the sight of all. [End quote]

I've learned that each time I go to Confession, I have to very carefully reflect on the sin of scandal and take a good look at my life...sometimes I have more to confess than I first thought.

Quote Source: The Fountain of Catholic Knowledge – Published by the Office of Catholic Publications in the year 1900 [page 208-210]