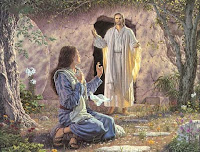 JJ writes: I'd like to discuss the CC's idea of a 'purgatory' and tell you what I think. Frankly, there is no such thing as your Catholic purgatory because scripture contradicts that bad theology. We see a perfect example of that when Jesus was on the cross. Jesus said the thief would be with Him in paradise that day - and since Jesus is God and God is in heaven and on earth, the thief went to heaven that day like Jesus said. No stop in any purgatory, earthly death - then straight to Heaven!

My response: Jesus did not go to Heaven until 40 days later when he ascended, that is what scriptures say and the Catholic Church agrees. Jesus and the thief went to "paradise" that day, not Heaven where the Father is. When Mary Magdalene tries to touch him Jesus tells her not to touch him because he has NOT yet gone to the Father (John 20:17 "Jesus said, "Do not hold on to me, for I have not yet returned to the Father.") So we know when He was in the tomb (not yet gone to Heaven with the Father) and the thief who died with him, they did not go to Heaven, but to Paradise. This "paradise" (AKA "Abraham's Side" found in Luke 16) is purgatory for the righteous. It's were all the righteous were awaiting Jesus to open Heaven for them.
Another term used for this "paradise" was a sort of "prison" because the righteous were...locked out of Heaven if you will, until Jesus opened it.
Scripture says Jesus went to "prison" after he died to talk to the souls there, this is Paradise/Abraham's Side. Once Jesus ascended into Heaven, all the righteous from Paradise went with him.
Luke 16:19-31 (Abraham's Side- the place where the righteous went before Heaven was opened)vs 22 (in part) "The time came when the beggar died and the angels carried him to Abraham's side."
1 Peter 3:18-19 (in part) "He was put to death in the body but made alive by the Spirit, through whom also he went and preached to the spirits in prison,"
Acts 1:3 "After his suffering, he showed himself to these men and gave many convincing proofs that he was alive. He appeared to them over a period of forty days and spoke about the kingdom of God."
And vs 9 "After he said this, he was taken up before their very eyes, and a cloud hid him from their sight".
Posted by Connecticut Catholic Corner